Jostaphine’s Wish : Ice Cream, dolphins and a trip to Sossusvlei and Etosha

Jostaphine Damab, a 10-year-old San girl, travelled to Windhoek with her friend Marlice on Thursday. Their plan included going for breakfast, drinking a milkshake, catching a movie, eating ice cream, and buying shoes and clothes. Then, on Saturday, they will travel together to Sossusvlei, spend a night there, then onwards to Swakopmund – to take in the sights and go on a marine cruise. Their final stop includes a visit to Etosha, to spot some of the big five. And then home-wards again.

As much as this is a typical adventure for many Namibian girls her age, Jostaphine’s story is different. She has never before tasted the creamy delight of an ice-cream. She has not gone shopping at Maerua Mall for clothes and shoes or watched a movie at the cinema. Jostaphine grew up in Gobabis, and has never seen any of Namibia’s famous landmarks. She has never seen the ocean.

She has terminal ovarian cancer which has spread throughout her body. This adventure, together with her friend Marlice van Vuuren, founder and director of the Naankuse Foundation, is a gesture of friendship and compassion, a way in which a few people have come together to grant this little girl a chance to experience an adventure of a lifetime.

The story of Jostaphine started more than a year ago, when her concerned father Johannes noticed her belly swelling rapidly. He took his young daughter to hospitals and clinics, but it was not before he finally took her to Naankuse’s Lifeline Clinic in rural Epukiro, towards the end of November, that the sad diagnosis was made.

By that time, her belly had swollen immensely, causing some to suspect she was pregnant. But tests showed conclusively that her convex belly was the result of a massive tumour. She was taken to specialists who diagnosed ovarian cancer. The cancer had, by that time, unfortunately spread extensively, and it was too late to try and stop its deadly course.

As a state patient, Jostaphine was told that she would have to wait until March 2014 before the tumour could be removed in a state hospital. Although removing it would not stop the cancer, Marlice explained that the tumour was causing Jostaphine severe discomfort. She, and her husband, Rudi van Vuuren (also a founder of Naankuse), decided to pay privately for the operation at a private hospital in Windhoek.

Just two girls going on a roadtrip. Marlice and Jostaphine

Since then, Jostaphine, her father, and her younger sister have moved to Naankuse. An older sister goes to school in Epukiro and visits often. Josephine no longer attends school but each day she plays with the local children going to school at Naankuse, and according to Victoria Fanthorpe, the fundraising manager at Naankuse, Jostaphine’s life currently is like that of any little girl, spending time with her friends on the playground and drawing pictures and playing with toys.

Marlice van Vuuren said the idea for a trip to some of Namibia’s best known landmarks came about when she asked Jostaphine one day what her biggest wish was. Jostaphine didn’t take long to reply, and her answer was: ice cream. That wish is being fullfilled now. But in addition to that, her story touched the hearts of others, and with that came the offer to sponsor a four day trip to see the highlights of Namibia – something Jostaphine has never before had the chance to do. 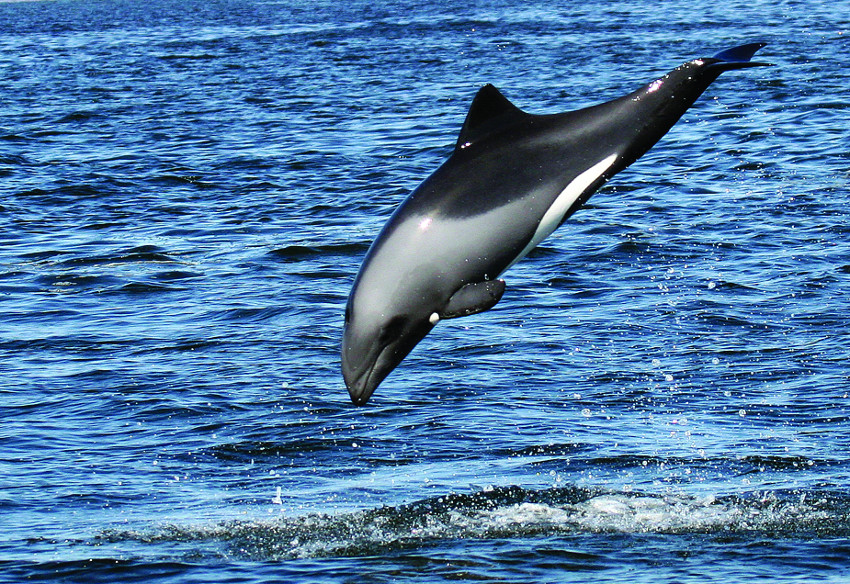 Benguela dolphins – a sure treat for Jostaphine on her marine cruise.

The trip is being sponsored by Wilderness Safaris and Wilderness Air, and is also supported by Namibia Tracks and Trails, Hansa Hotel and Mola Mola Safaris. The Van Vuurens asked Jostaphine’s father to accompany his daughter on the trip, but he said he “I will get lost. Will you please take her”. And so the journey has begun.

Marlice expressed her regret that Jostaphine was not diagnosed earlier, which would have meant that the cancer could have possibly been treated successfully. Now, however, the goal has shifted to making Jostaphine’s life as comfortable as possible, and as is the case with this trip, to treat her wherever possible.

“She already has wings, because she is a little angel”, Marlice desribed Jostaphine. She said that their trip together would afford her the opportunity to get to know her even better. Asked to describe Jostaphine from the few months she has known her, Marlice said she is “she is a very wise and intelligent girl. She is very quiet but once she starts talking, she doesn’t stop. She has a very good imagination, and likes telling stories. She is just your typical little girl. She likes pretty dresses and colouring her nails”.

Marlice explained yesterday that the decision to publicise Jostaphine’s story was not made lightly. In the end however, it was felt that Jostaphine’s story once again highlights the crucial need for better access to primary health care for marginalised communities in Namibia. The Naankuse Foundation’s Lifeline clinic is a important medical gateway for a community that often struggles to access health care in Namibia.

Sadly, help came to late for Jostaphine, but in the end the Naankuse Foundation’s members have taken it upon themselves to “make her remaining days as comfortable and happy as possible by giving her all the palliative care and support she needs”.

Arising from this story, and the health crisis faced by Cgunta (who suffered 70% burns in an accident in 2012), the Naankuse foundation is launching the Lifeline Fund, which will be available to those who need urgent, and often exorbitantly priced, medical care. It is hoped that this fund will be able to assist those in need of critical medical care where otherwise they would not be able to receive that care. In the words of Marlice, the fund will be for “cases where urgent help is needed, so that people can access that help much quicker”.

HIGHLIGHTS OF THE TRIP

1. On day one, Jostaphine and Marlice are flying to one of Wilderness Safaris most exclusive camps, Little Kulala Lodge. There, Jostaphine will be taken to Sossusvlei, to get her first glimpse of Namibia’s famous red sanddunes.

2. On Sunday, the pair will fly to Swakopmund, where the Hansa Hotel has offered them complimentary accommodation for two nights. The two days are packed full of fun activities, which Namibia Tracks and Trails have tailor made for Jostaphine. The activities include a few hours on the ocean with Mola Mola Safaris, who also are giving this as a gift to Jostaphine.

3. After two fun filled days at the coast, the last leg of the trip begins. Jostaphine and Marlice are again flying with Wilderness Air to Ongava Lodge, situated right next to the world-renowned Etosha National Park.