Gray whale – how did it end up in Namibian waters?

Anyone who’s been to Wolwedans in the NamibRand Nature Reserve will appreciate the quality of the creativity and fervour that inspired Stephan Brückner and Ralf Herrgott to come up with their remarkable NICE concept.

The two spent a couple of years together working at Wolwedans at the beginning of the new millennium. The nature and significance of their project measures up to three aspects of Wolwedans in no uncertain terms: the extraordinary beauty of the surrounding desert wilderness; the high aesthetic standards of Wolwedans Dunes Lodge (created and implemented by Stephan); and the impeccable Wolwedans cuisine (created and orchestrated by Ralph), which has arguably been challenging lodge cuisine in the rest of Namibia ever since. 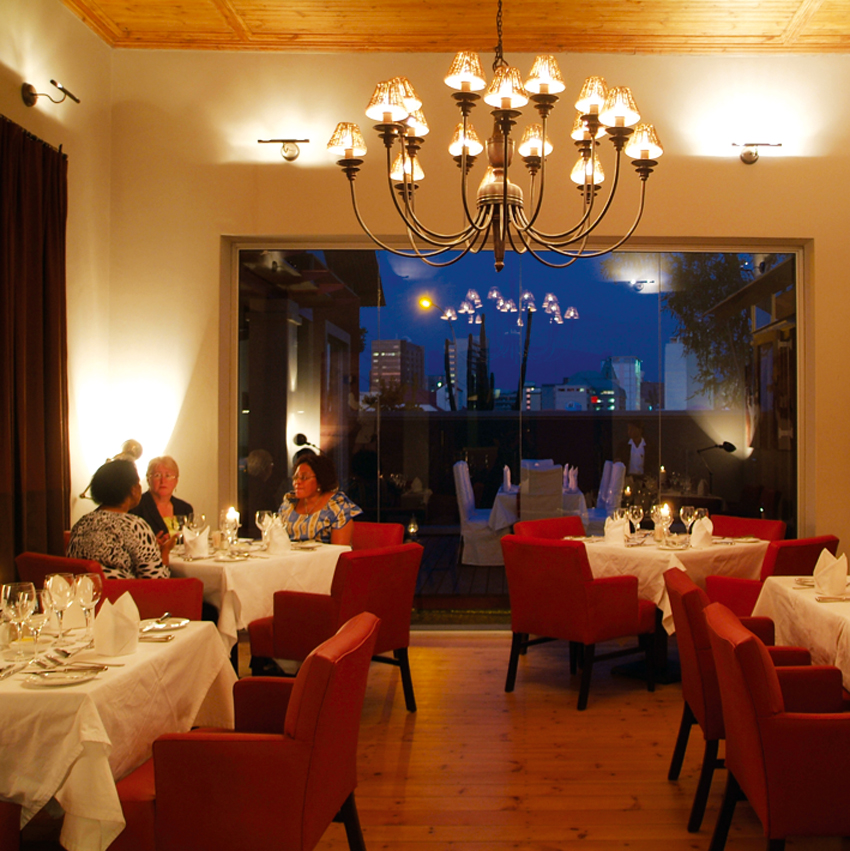 Enter NICE, the Namibian Institute of Culinary Education, initiated by Wolwedans and supported by the Deutsche Entwicklungsgesellschaft. Described in its project proposal as an investment in training, opportunity and socioeconomic empowerment/development, NICE will consist of a vocational training project and a Chefs’ Finishing School that are linked to a profit-generating restaurant section that will give the students full-on practical exposure to their profession. The restaurant section will be the main funding body of the training facility, making NICE self-sustainable in the medium to long term.

The NICE complex has been designed around the historical and spacious Brückner family home on the corner of Mozart Street and Hosea Kutako Drive on the eastern periphery of Windhoek West. The original building has been renovated and expanded extensively to accommodate, in addition to the school and state-of-the-art glass-fronted kitchen, several dining venues including a sushi bar, the latter built on a floating wooden deck surrounded on three sides by water, a bar, various courtyards and wine cellars.

The aim is for construction to be finalised and to have all sections up and running by mid-May. If the Site-Meeting Sundowners that have been offered every Friday afternoon since October last year – not to mention the speed and enthusiasm with which Stephan takes visitors around the complex to inspect the building progress – are anything to go by, the doors at NICE will be opened on schedule.

The official opening will be later in the year, by which time the complex will buzzing with activity, as the first intake of students (10–12) is scheduled for 15 May. Ralph, who will be handling the training and who selected the first intake of students, will be assisted by a second German-trained chef. Students are chosen from people who have already worked in kitchens, and therefore have previous training or experience in the culinary arts.

The primary objective is to produce 10–12 professional chefs for the Namibian hospitality industry every year. After 11 months of intensive practical training, they will be rated as senior chefs and be equipped to take up management positions in lodges and hotels throughout the country in the field of cooking and food and beverage management. In addition NICE will run crash courses in cooking and hospitality for quicker and more broad-based results. Such courses and workshops will constitute an additional form of income for NICE and the restaurant. Also envisaged are cooking classes for private individuals and courses that focus on speciality cuisine.

The restaurant section will comprise several venues for serving food that varies from fine dining to informal, brasserie-style meals. There will, for instance, be a formal venue for business lunches and dinners, receptions and special functions; a brasserie section that will open out onto a courtyard where popular classics like burgers, Ceasar salad and steak & chips will be served; and a bar section serving ‘pub grub’ such as fish & chips, antipasti and other popular light meals.

Says Stephan: “Friday afternoons will be happy hour at NICE. People can come and unwind over a sundowner any time from four on. With the older toppies in mind, we’re establishing a dance floor in the courtyard, and we plan to occasionally host musical performances and other live entertainment. On Sundays we’ll serve brunch and lunch, which will be ideal for families with children, as we have plenty of garden space. We’re also geared to host conferences for up to 50 delegates. Melle Orford of Wine-Bar fame will be handling the wine section of the enterprise. She’ll have a wine shop, present wine-tasting events and train the students.”

The ultimate objective with the restaurant section is that it will be an independent profit centre that generates, after a start-up period of three years, sufficient funds to make the entire project self-sustainable.

The driving force behind the NICE project is NamibRand Safaris (Pty) Ltd, a lodge operator that has been in business for ten years. The second partner is Ralf Herrgott, a German citizen, who arrived in Namibia in early 2001 as a professional chef trained in Germany. He spent two years at Wolwedans and turned the Wolwedans kitchen into one of the top facilities in the country. Ralf will be the executive driver and trainer. Last but not least is Stephan Brückner, MD of Wolwedans, who was the co-initiator of NICE with Ralf Herrgott, and is one of the main drivers of the project. (AS)