On the backroads and beyond – explore Namibia’s Nama Padloper backroads.

The road leads into the hills to the ruins of the Kyk in die Pot (look into the pot) house, namesake of the route, and through hills dotted with more quiver trees than you have ever seen before. Zebras eye you curiously from a safe distance and the day is brightened with an expansive, clear blue sky and a sweeping beauty as can be experienced only on the backroads of Namibia.

The 128-kilometre route that runs through a section of the Huib Hoch Plateau on the D446/D727 from east of Aus to north of Rosh Pinah, is one of the four sub-routes on the Nama Padloper network, giving visitors with time on their hands and an adventurous inclination an option of interesting routes in the south-western part of the country.

The Kyk in die Pot road was given its name for the prime view it used to give from the road above into the farmhouse kitchen, and hence the cooking pot. The house no longer has simmering dishes cooking on the stove, however. Indeed, Quiver Tree Route would be a more apt name, due to the abundance of this iconic tree of the south that can be glimpsed in the surroundings. The route was used by farmers in times of drought for emergency grazing in the Sperrgebiet from the 1950s to the early 1980s.

An alternative sub-route veering to the east between Rosh Pinah and Keetmanshoop is the Witputs route, traversing the area on the western side of the Fish River Canyon, passing the ruins of the Witputs farm and other historic sites, including the remains of a South African WWI base.

Both have additional optional routes at their tail ends, depending on the traveller’s destination, and can be travelled in either direction. Although a 4×4 vehicle is not needed in the dry winter months, a high-clearance vehicle is recommended. In the summer it is advisable to check the condition of the road before setting out, as the routes repeatedly cross rivers.

This interesting chunk of Namibia that falls predominantly in the Succulent Karoo biome can easily be incorporated with a visit to the Fish River Canyon. The Nama Padloper Route follows the Orange River to Rosh Pinah and up to Aus, and is ideal for people travelling northwards to Sossusvlei, stopping off at Aus and Lüderitz along the way.

Several establishments line the Orange River near the border post at Noordoewer. They offer campsites and other accommodation directly on the riverbanks, and the much sought-after canoeing trips. From the southern border of the country where the Orange cuts through craggy mountains, gifting the swathe of land around it with vegetation and birdsong, the tarred road follows the river and the moonscape-like terrain in a westerly and then a northerly direction to Aussenkehr and its verdant vineyards.

A gravel road – corrugated, stony and sandy in sections – continues from Aussenkehr for 100 kilometres to Rosh Pinah. The town has all the modern conveniences that a traveller needs – a supermarket, restaurants, a bank and garages. A mining town rich in minerals, especially zinc and lead, Rosh Pinah has a sparkling new Geo Centre where a collection of quality specimens are on display. It is well worth the short detour to find this facility behind the Spar supermarket.

The C13 sub-route to Aus is the fourth route in the area. It is an easy tarred road edged by mountains. Aus, Klein Aus and Lüderitz provide good bases from where to explore the surroundings, view the wild horses of the Namib in the vicinity of the Garub waterhole, and visit the old diamond-mining town of Kolmanskop before venturing north.

There is a choice of accommodation facilities along the Nama Padloper Route – at Noordoewer, Aussenkehr, Rosh Pinah, Aus, Klein Aus and Alte Kalköfen (on the D462), as well as along the more remote sub-routes, all with a variation of scenery and catering to different budgets, ranging from camping to upmarket accommodation. 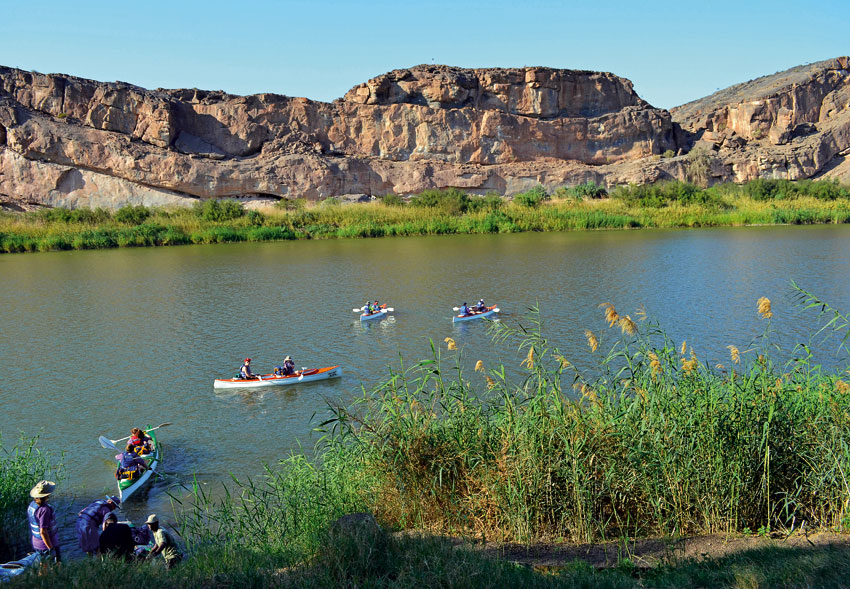 Named after the small, endemic Nama padloper (translated from the Afrikaans word meaning road/path-walker) or Berger’s Cape tortoise, Homopus solus, a species listed as ‘vulnerable’, the Nama Padloper Route is part of the Open Africa Initiative that has introduced interesting routes in six African countries. The word Nama refers to the Nama people who live in the southern reaches of Namibia. They are descendants of the Khoekhoe, one of the oldest ethnic groups in Southern Africa.

Giving you a taste of rugged mountainous area, the reed-lined banks of the Orange River, mountain slopes dotted with the quirky and resilient quiver tree, terrain where sparkling gemstones occur, ruins from the past and Namibian farmland, the Nama Padloper sub-routes – most importantly – lead you away from main roads where the destination is paramount and speeds are fast. Along the quieter Padloper routes you can slow down to explore the countryside and discover the beauty of roads less travelled, the backroads and beyond.