The ephemeral rivers – A passage to the coast

A fisherman’s dream … fishing along the Namibian coast

Fresh linefish can be bought at some shops, but where does the ‘catch of the day’ that is served in a multitude of coastal restaurants and hotels come from?

Possibly from the Fishermen’s Association of Henties Bay, which sells through this co-op. And where is Namibia’s snoek and kob marketed? How does it all fit together and who benefits from what and who competes with whom in this multi-user fishery?

In the nutrient-rich upwelling system fostered by the northern Benguela Current running along Namibia’s coast towards the equator, there are not many fish species compared to those found in Angola’s northern sub-tropical waters.

But this is offset with the abundance in which these few species occur.

As a result Namibia is a shore angler’s paradise, even though we essentially have only four popular angling fish species, namely silver kob, West Coast steenbras, galjoen and blacktail, while the bronze whaler (bronzy), spotted gully (spotty), cow and smooth-hound are the four most popular sharks.

Sometimes there are larger fishing boats visible from the shore that pull flapping silvery bodies from the sea, also by hand line. Then there is the ‘bicycle brigade’ from Swakopmund – locals with their fishing rods mounted on their bicycles setting off for their favourite fishing spots when it’s still dark.

And there are the dozen or so angling clubs that hold their competitions in selected shore areas mainly targeting ‘bronzies’ and ‘spotties’, while light-tackle boat competitions held in the lagoon area of Walvis Bay mainly churn out sand sharks and rays.

All the players sometimes target the same species, such as silver kob, Namibia’s most popular line-caught fish. This fishery has two sectors, namely commercial and recreational.

Commercial includes the line-boat fleet operating around 10 line boats from Walvis Bay. Some are freezer line boats with the rest being traditional wooden vessels using ice to keep the catch fresh. These are the fishermen who go after the snoek with hand lines in summer. Snoek are sold either gutted and salted, gutted and frozen, or frozen whole after being headed and gutted. All these products are exported to South Africa and the islands of Reunion and Mauritius. During the winter months they traditionally targeted large kob, which were exported to Portugal and South Africa. Since April 2008, however, to protect the kob stock, they may only catch snoek.

The recreational sector constitutes recreational shore anglers and ski-boat anglers who may not sell their catches. This also includes competitive angling (rock-and-surf and from a light-tackle boat) and of course sport angling such as when an angling tour guide takes out clients to catch sharks or ‘edibles’ such as kob or galjoen.

The first economic survey on the linefish fishery was done in 1997 with four more conducted by different researchers to follow. The results of the first survey and the follow-ups clearly showed that the commercial sector is worth only one fifth of the value of the recreational fishery in terms of revenue generation to the country. Furthermore, this study showed that about 10 000 anglers conduct between 180 000 to 200 000 angler outings per annum, of which more than 60% are South African tourists.

Foreign (mostly South African) recreational anglers buy food, fuel, bait, refreshments and so on at various Namibian suppliers during their holidays here. As most of these visitors travel by vehicle and because Namibian towns are few and far between, they stop overnight en route to the coast, usually at scenic places. 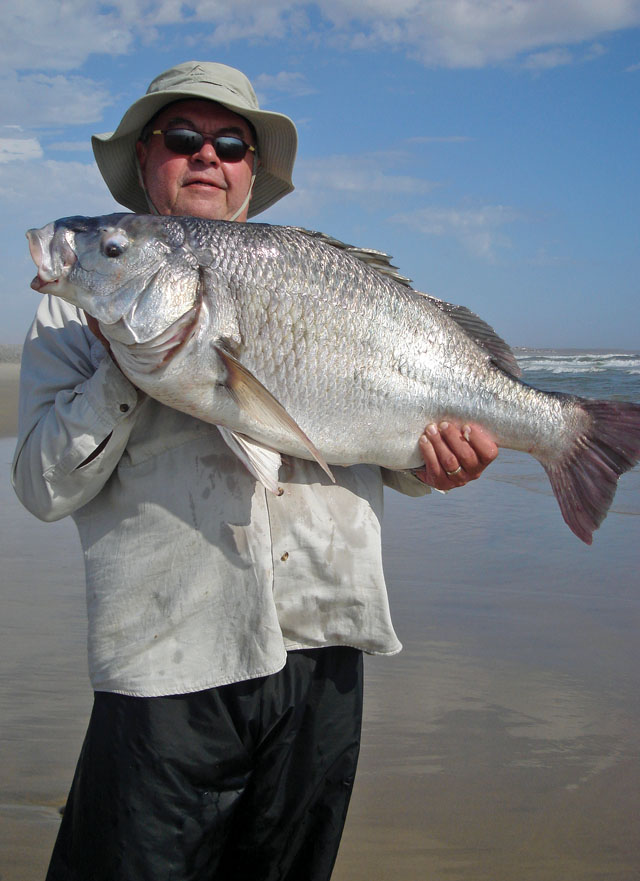 Visitors make use of the camping facilities at the various campsites along the coast, some of which are administered by the Ministry of Environment and Tourism, or they hire private houses for the duration of their stay, make use of municipal bungalows or caravan parks or stay in hotels or bed-and-breakfast establishments. Thus a wide variety of service providers benefit from these foreign anglers.

A separate economic study was done recently to evaluate the tour-guide angling industry with specific reference to the bronze whaler shark. This industry targets overseas clients, mostly from the United Kingdom, Germany, Eastern Europe and Belgium. For instance the UK anglers normally stay for an angling vacation of 14 days devoted entirely to catching bronze whalers. There are some 12 part-time and full-time guides operating from the coastal towns. It was estimated that this small, non-consumptive industry is currently generating almost half the revenue of what the rest of the linefish fishery earns.

The sociological and psychological benefits to the recreational angler and his family cannot be measured in terms of money. Nevertheless, it is the duty of the government of any country to guard its natural resources, the ownership of which belongs to its inhabitants. This becomes even more relevant if the resource contributes to the economy, even a small fishery such as the linefish fishery. Therefore the Ministry of Fisheries and Marine Resources regularly has to adapt its fisheries regulations for sustainable utilisation of the linefish resource, while also making sure that all stakeholders benefit equally from it.

While a mystery to most, the life and death of a kob, Namibia’s most popular line-caught fish, is very interesting to those in the know.

The kob has a life fraught with danger from natural enemies throughout its different lifecycles up to a maximum age of about 28 years.

Silver kob (Argyrosomus inodorus) occurs along Namibia’s 1 600-kilometre-long shoreline roughly from Meob Bay in the Namib-Naukluft Park in the south, across the centrally located West Coast Recreational Area (WCRA) to about halfway to the Kunene River in the Skeleton Coast Park. And along this coastline, especially north of Swakopmund, man waits with his baited hooks and nets to catch this sought-after table fish.

The facts that follow were obtained through the Namibian Angling Fish Tagging Programme (NAFTAP) that was initiated 20 years ago. To date almost 30 000 kob have been tagged, of which 456 have been recaptured, giving us their size/weight ranges, growth rates, geographical distribution and migratory cycle. Biological studies showed us what they eat, how they reproduce and how they age. Most fish were tagged in the areas closed to shore anglers, principally to determine to what extent those tagged fish would move into or ‘seed’ the ‘open’ WCRA, which constitutes only one fifth of the coastline.

It is along this stretch of coast that about 180 000 angler outings occur annually. And yes, with today’s modern rods and reels, GPS points and 4×4 vehicles, such a large number of anglers can overfish the kob stock if strict angling regulations are not in place. By interviewing anglers while they are actively fishing and sampling their catch (roving kreel surveys) we can, by using a specially designed computer model, determine how many kob are available to harvest. Based on this information we can adapt the daily bag limit per angler in order to utilise the kob stock sustainably. Thus, in 2001, the bag limit was lowered from 30 fish per angler to only ten.

To follow the life of a kob we have to start in the Skeleton Coast Park, where the main breeding stock lives. Here the cold Benguela Current provides the kob with a rich diet of small pelagic fish, chokka and shrimps. These adult fish are between 60 to 120 centimetres in length in an age range of between five and 28 years. Large adults, called spawners, which are 70 centimetres long and bigger, start their annual spawning (breeding) migration southwards against the surface currents, at the beginning of the austral summer to their main spawning grounds, Sandwich Harbour and Meob Bay, at the southern end of their distributional range. This is also the time when the warm Angolan front starts pushing southwards, bringing warm, saline water and sometimes tropical fish species such as shad and garrick from mid-Angola as far south as Swakopmund.

On their way down the coast some large predators such as pelagic sharks will catch a few of them, while shore anglers at Terrace Bay and Torra Bay will catch many of them. They will also pass though the seal colonies of Möwe Bay, Torra Bay, Toscanini and Cape Cross, but seals are more interested in the oily and tastier small pelagic shoaling fish such as pilchard and horse mackerel, which they can catch easily rather than spending a lot of energy chasing a fast predatory fish such as a kob. After feeding at Toscanini Bay, they will cross into the WCRA and appear briefly at popular angling spots such as Horingbaai, Mile 72, Jakkalsputz and so forth, where they will feed in the shallow bays. Here hundreds of baited hooks from shore anglers await them, but it’s only those anglers that can cast far who will be lucky enough to end up with many spawners in the bag.

In addition, between Henties Bay and Swakopmund ski-boats will now hunt them just behind the breakers and their numbers will decline further as many are hauled aboard. This is very easy once the onboard fishfinder has located the school. Just drop the baited hook overboard and it will instantly be swallowed by the hungry fish. Now comes the last hurdle before they reach the safety of Sandwich Harbour, namely the famous Paaltjies numbers 1 to 3.

The bush telegraph works well and here hundreds of shore anglers will await their arrival, even anglers from South Africa, who arrive on short notice to take part in the feast. Fortunately the kob keep moving and soon the lucky ones will reach the safety of Sandwich Harbour, which has been closed to angling from 25 January to 15 April each year since 1992, specifically to offer protection for these spawners. Since 2001, when the angling permit system was introduced, a maximum catch limit was specified, restricting an angler to keeping only two kob of 70 cm and larger in a further effort to protect the breeding stock.

Spawning now takes place between here and Meob Bay, 180 km further south. The females will release their eggs in batches, while the males fertilise them with their milt. Some will be caught by the research team for research purposes and they will be measured, weighed, tagged and released again. This procedure takes about 1–2 minutes. By the end of March, when the water temperature decreases to about 15°C, they will begin their long journey back home, moving slightly off-shore. On their way they may be caught by mid-water trawlers or purse seiners but the high bycatch levy on kob makes the skippers think twice before hauling any aboard. During the winter months they were traditionally caught by line boats on their home grounds. However, since April 2008, line boats may only catch snoek. This was done because their catches of kob over the last six seasons has declined dramatically as they could not find the large kob on the traditional fishing grounds. With this management measure in place, we hope that the stock will recover sufficiently.

Meanwhile the eggs will hatch and the larvae now drift north with the current to the nursery and juvenile grounds around Swakopmund in the WCRA. At this stage they might become the prey of jellyfish and other small predators. Those that survive will grow rapidly and reach 30 cm within one year, and they will be hunted by larger fish such as snoek, sharks and seabirds. When these juveniles reach the age of approximately two years at about 40 cm, they will gradually move north towards the adult home ground, the Skeleton Coast Park waters. This is also the size at which about 50% of the population reach sexual maturity. Therefore, to give them all a 50% chance to reproduce at least once in their lifetime, a minimum length of 40 cm was introduced in 2001.

Here, in the relative safety of the Skeleton Coast Park, they will feed and grow until they become adults at the age of about seven years. Now their growth will slow down to save that energy for reproduction and to take part in the yearly spawning migration. So the life of a kob starts, comes full cycle, and ends.