Walking back in time – Windhoek walk for culture & history

Lüderitz Speed Challenge around the corner

Photos and Text by Jana-Mari Smith

On Saturday morning, despite the chill in the air, a group of Windhoekers, including a number of school children, gathered on Robert Mugabe Avenue to start a cultural and historical tour of the city.

The aim: an introduction and refresher course on some of Windhoek’s historical and cultural gems.

The “Windhoek Walk for Culture” was put together by the City of Windhoek as part of National Heritage Week and as a build-up event to the /Ae//Gams Arts and Cultural Festival.

On the walk, we were joined by the amazing singers and dancers of the !Gorobahe Cultural Group, made up of scholars from the Auas Primary School – Windhoek’s very own Glee club.

They performed at the first stop of the cultural tour, at the Alte Feste Museum and the Reitersdenkmal.

The Alte Feste was Windhoek’s first building and the man who laid the first cornerstone, Kurt von Francois, is recognised by many as the founder of the city. The Alte Feste was built in the early 1890’s. Now the building houses the historical section of the Museums of Namibia.

The Reiterdenkmal was erected by the German forces in 1917 and is one of the city’s most famous landmarks.

The walk then took the group past the eye-catching historical building that is the Christus Kirche. This church is the oldest Evangelical Lutheran church in Namibia and was consecrated in 1910.

Next stop, Tintenpalast and the parliament Gardens. The stately “Ink Palace” remains an integral part of government just as it was intended when it was completed in 1914 to house the Landesrat. 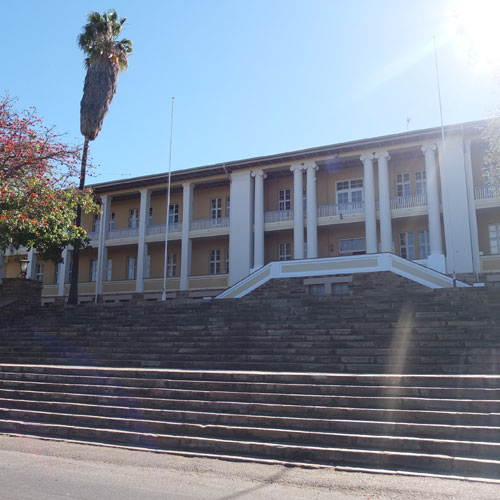 Parliament gardens remain a lush and green oasis in the city, where early morning Thai Chi can be practiced amongst lovely bird song and tall, shading trees.

The group then moved down towards the Owela Museum, where once again the Glee club entertained us with a variety of songs and dance.

Kavango – exhibition at the Owela museum

At the Owela museum the group wandered amongst the display cases depicting Namibia’s cultural diversity and wildlife.

Then it was off to the National Art gallery, where Namibian artists Ilovu Actofel and Fillipus Sheehama talked about “spreading culture through art”. Sheehama noted that art is “about looking around you, your environment, and interpreting that environment”.

Actofel noted that art could also act as a gateway to spread local culture to the outside world, specifically through arts and crafts bought by tourists who want to commemorate their stay in Namibia and share their adventure with loved ones.

Just across the road, the group visited the Franco Namibian Cultural Centre (FNCC), first to view the multi-media “What we See” exhibition and then to witness a para-military style dance troupe show off their stuff.

Next, it was off to the National Archives of Namibia, where archivist Werner Hillebrecht briefly explained the important role of the archives to preserve precious Namibian materials and research dating back more than 100 years.

Werner Hillebrecht at the National Archives

A view of the Old Prison, built in 1904, and the Turnhalle building marked the final part of our journey, to the Zoo Park. 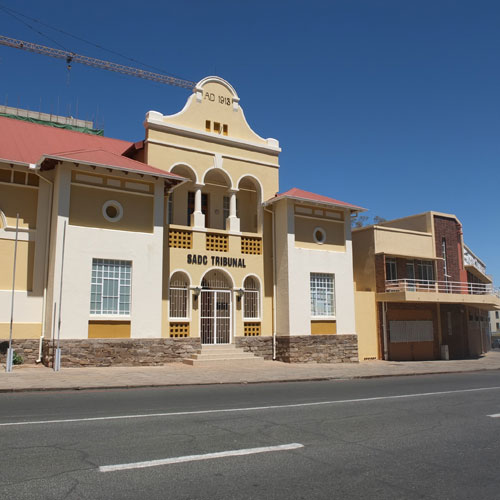 The day marked a truly inspirational reminder that Windhoek is home to a rich cultural and historical legacy and that there are many who strive to preserve these precious gems.