An unexpected treasure is lovingly nurtured amidst the red dunes of Sossusvlei and the rolling bushveld of the Kalahari. In small vineyards hidden across the countryside, Namibia’s dry and rugged beauty is instilled in the aroma of wines that few people even know exist.

T here are less than a handful of wineries in Namibia and none of them compares to the extended wine estates of South Africa’s Western Cape. Instead, little pieces of paradise are carved out in a hostile desert environment, creating small oases of ingenuity. With endless patience the Namibian wine farmers grow their vines and experiment to see what grape varieties are most suited to the country’s harsh climate.

The result is often astonishing – an internationally acclaimed Shiraz, or a chilled Colombard that stuns the senses on a hot summer’s day.

The oldest cellar of them all is the Kristall Kellerei in Omaruru. Established in 1990 by wine pioneer Helmut Kluge, the Kellerei was taken over by the Weder family in 2008. Building on firm traditions, Michael and Katrin Weder took on the job of guiding the vineyard into a new century.

The winery lies on the outskirts of Omaruru, a town in the heartland of the Erongo Region. The town takes its name from the ephemeral river that runs through it from January to April. The settlement of 6 000 is located some 60 kilometres from Karibib on the scenic C33 that is tarred all the way to Otjiwarongo.

Omaruru’s low-key charm makes it one of the most attractive stopovers on the long journey between Swakopmund and Waterberg Plateau Park and beyond. Just before entering Omaruru, you turn left and follow the signs to Kristall Kellerei, which lies on a gravel road on the outskirts of the town.

In a pleasantly shaded garden in front of the winery – a white, one-story building in a traditional style – we meet Michael Weder. Inside, the simple wooden furniture and massive fireplace evoke a warm sense of hospitality.

Here guests can enjoy a quiet afternoon of wine tasting combined with a tour and some local delicacies at very affordable rates. “We offer a light lunch, consisting of cold Namibian game meats such as zebra, gemsbok and kudu,” says Weder. “Namibian-made cheeses and home-baked bread complete the platters.”

Trotting through the vineyards on a beautiful and cloudless Sunday afternoon, Michael explains the particulars of various grapes. Kristall Kellerei grows Cabernet Sauvignon, Ruby Cabernet, Colombard and even some Tinta Barocca. On a modest four hectares, 7 500 vines hold their own in the Namibian soil.

“We produce about 5 700 liters of wine,” continues Weder. He emphasises that, careful to ensure lasting quality, not every grape is automatically made into wine.

“The first vine to mature in 1994 was the Colombard. We still bottle this white wine. It is sold here at the winery and in the better restaurants and wine shops in Windhoek.”

The special feature of the Colombard is that it’s unfiltered. “Clients are often not used to this, because it affects the colouring slightly, making the wine a bit hazy. The benefit, though, is that the flavour and aroma are retained. It’s a much appreciated wine.”

The Ruby Cabernet also finds its way onto the shelves in the form of a nice red wine that derives its soft dryness from a combination of frost, extreme heat and water scarcity and, according to the label, is best consumed when young.

Despite state-of-the-art machinery, most of the work such as pruning, picking and crushing is still done by hand to ensure strict quality control. In one corner of the winery a vintage 1951 Deutz tractor – still in working condition – awaits the harvesting season, which starts in January.

Kristall Kellerei is special among the Namibian cellars for also producing an enticing range of spirits. In a separate building Weder operates a distillery which has spawned a variety of schnapps and grappas, the latter playfully called nappa.

Says Weder: “At present we have two nappas. One is made from our own grapes and aged in oak, tasting somewhat like brandy. The other is made from the Catawba grape, tasting typically like grappa, although it is softer than many of the more traditional grappas. All our spirits have 43% alcohol and are soft, as they have been matured for at least eighteen months before bottling.

“We are busy experimenting with different products for a schnapps, such as honey-bush tea, which we call Kuppe after the Omaruru Kuppe close to the farm, and marula. We also make a renowned prickly-pear schnapps named Matisa.”

In an abandoned plot of the vineyard the family has started growing dates that in a few years will form the basis of yet another exclusive Namibian schnapps.

“Customers enjoy the Namibian wines and spirits and savour the idea that they can get them nowhere else,” says Urs Gamma from Gathemann Restaurant in Windhoek. For the past 22 years Gamma has made a point of including Namibian products in his menu, whether it’s truffles, mushrooms, chocolate, wild fruits or wines. “Why would I put the same wines on the list as everybody else, when there’s a great variety of excellent little cellars to be explored in Southern Africa?” His personal favourites from Kellerei? “I really like the Colombard very much, and the nappas are also of an exceptional quality.”

Michael Weder is the owner of Kristall Kellerei in Omaruru. 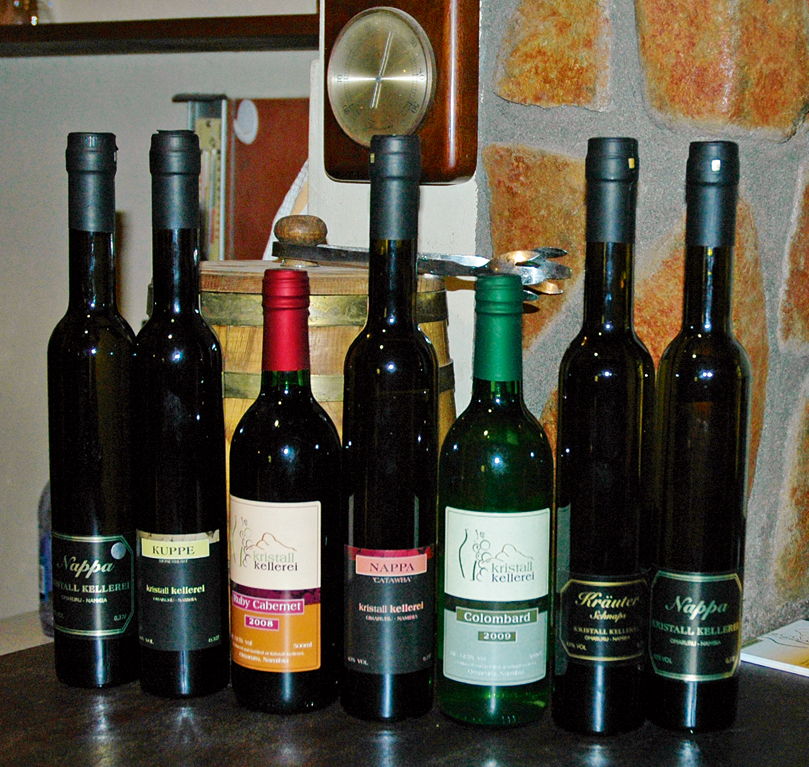 Besides wine, Kristall Kellerei also produces a variety of schnapps and grappa.