Scheppmannskirche – the church in the desert

Diamonds in the dust – Ghost towns of the diamond era

How many roads must a man walk down, before you call him a man?

How many seas must a white dove sail, before she sleeps in the sand?

The answer, my friend, is blowin’ in the wind,

The answer is blowin’ in the wind.

I wonder if those pioneers in the early 1900s ever saw Barlow’s Lark at Pomona, or the Dune Lark in the dunes near Lüderitz? Looking at the barren ‘killing fields’ those diamond hunters left behind as memories for later generations, I doubt it very much. I suppose the diamond’s blinding effect on your eyes has the same effect on your mind. In the end, it is the larks that are still around, and not those diamond hunters.

Once you’re in Lüderitz, please don’t become too carried away by the beautiful Art Nouveau and German-Imperial style buildings, because then you’ll definitely run out of time. Our trip along the peninsula south of Lüderitz proved to be most fruitful, with our first sighting being a lonely Greater Flamingo wading along the edge of the Radford Bay lagoon.

At Stormvogelbucht, we unfortunately didn’t see any petrels, but we did see our first pair of African Black Oystercatchers. If you haven’t seen one of this ouks with their red eyes and red legs, ‘you ain’t seen nothing yet’. After every bird trip, one bird always sticks out in your mind, and without doubt the African Black Oystercatcher was the Lüderitz ‘special’ for me.

Our next stop was Dias Point, and as I’d been warned beforehand about the wind, we held on for dear life and did some bird watching at the same time. A flock of Ruddy Turnstones welcomed us, and without having to hang on to the latticed bridge, we had another quick sighting of two ‘tobies’, a breeding Kelp Gull and a few Hartlaub’s Gulls drifting in the strong south-western wind. From here we had a good view of Halifax Island, our destination for the next day, via the sea. Watching the 40-metre waves crushing into the side of the island, I already had my doubts whether the anti-emetics would do the trick for me.

It would be a sin not to mention the exceptional vegetation along the peninsula. If I had any doubts about birds surviving in this arid windswept landscape, the plants were an eye-opener par excellence. I became so carried away in my botanical expeditions that I almost forgot about the bird watching. Two definite specials were the Bushman’s candle (Sarcocaulon patersonii) and my favourite, the Pelargonium cortusifolium. Antje Burke wrote in her book Wild flowers of the southern Namib ‘this plant grows only in rocky habitats’. To be honest, I think this is somewhat of an understatement. I’d rather put it ‘…grows only in the most inhospitable barren, hurricane-force-wind-plagued, untenable circumstances imaginable’. Both these plants had the most beautiful little flowers, just to show you what can be done!

If Coleridge’s Ancient Mariner had to endure only a fraction of the wind we experienced on our trip to Halifax Island on the Serdina, his poem would have been much shorter, probably a one liner, but then again, our skipper didn’t have an albatross around his neck. Going up and down with 60-metre-high waves we were able, at times, to see Windhoek going up, and Atlantis going down. We had a good view of two Cape Gannets trying to impress us by flying around in the gale-force wind without having to hold on to anything for dear life. They actually seemed to enjoy it! 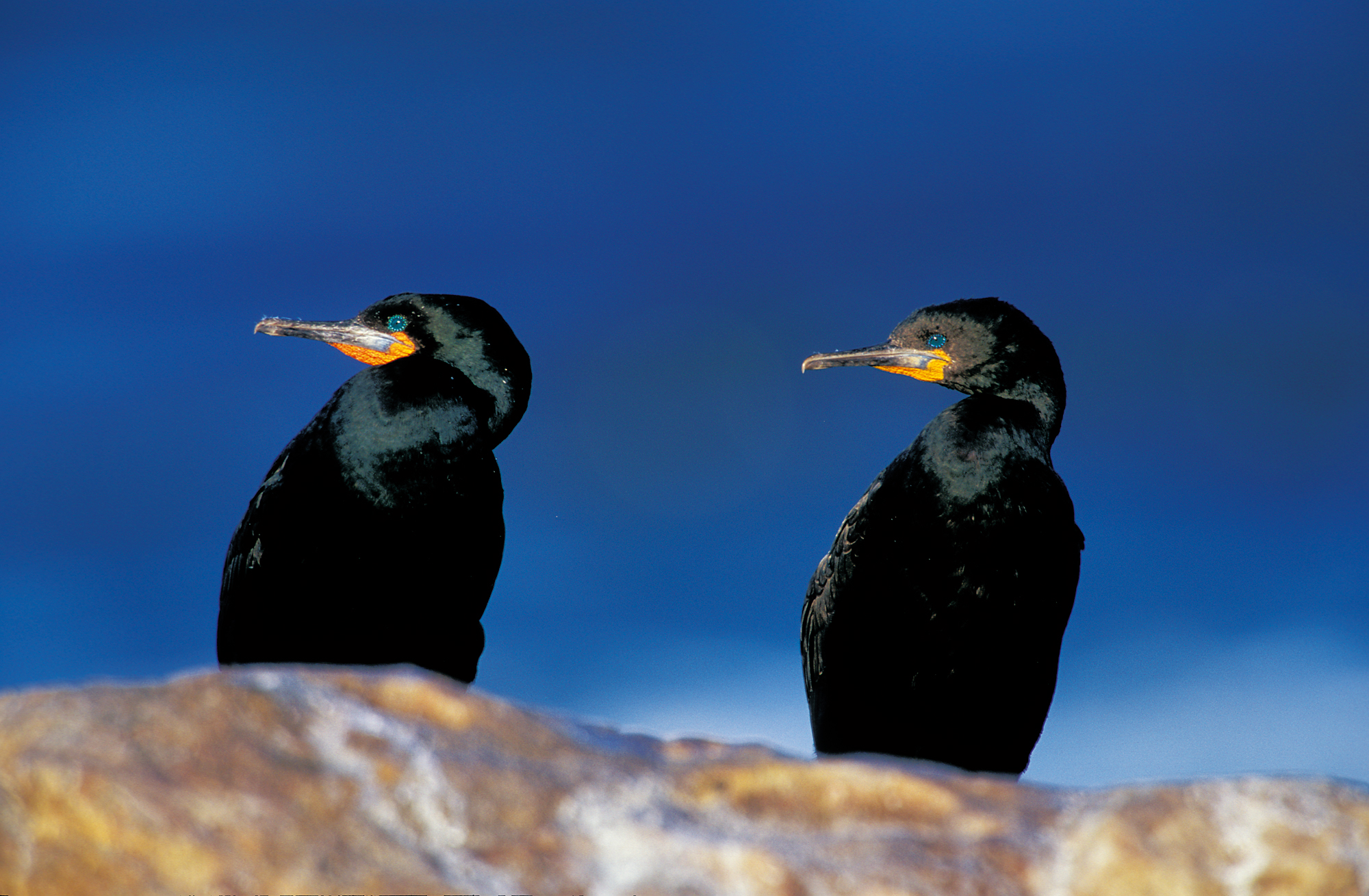 Unfortunately, as a result of the strong wind, we were unable to come close enough to take decent photos of the Cape, Bank, White-breasted and Crowned Cormorants, or of the Jackass Penguins. At least we were able to hear why they are called Jackass Penguins, because even those passengers who were afraid to open their eyes, could at least think we were driving through donkey country. In the end, the trip was an unforgettable experience not to be missed by anybody visiting Lüderitz. Next time around, we’ll definitely be on the boat, come hell or high water (hopefully not too high).

Shark Island is a must for the birder. We had some good sightings of Swift and Caspian Terns, and finally the ‘tobies’ allowed us close enough to see them face to face. The scenic view of the town from here is also well worth the effort and, if you can withstand the windy conditions on the rocks, you might be lucky enough to see the odd albatross or petrel.

Our trip down to Bogenfels was probably as impressive as you could ever wish. You wonder why this ‘monument’ wasn’t named as one of the seven wonders of the world, but then, it’s probably better this way, or you’d have had a McDonalds in the background of this majestic rock monolith. And yes, we did see a pair of oystercatchers patrolling this spectacular area, making it even more spectacular.

Our last stop was at Kolmanskop, but apart from the Black Crow’s nest in one of the old houses, there were no traces of other birds, not even a Barn Owl, which would have been a fitting ‘decoration’ to these beautiful old houses.

Although it’s a long way to drive, it’s a trip you shouldn’t miss. Hopefully, the Barlow’s and Gray’s Larks will have the last laugh, but Bob Dylan might well be correct in singing:

The answer, my friend, is blowin’ in the wind.