Birding at the Walvis Bay Lagoon

Swakopmund through the eyes of a child

Swakopmund is by far the most sought-after holiday destination in Namibia, especially during the December/January summer holiday season. If you have a house or a flat at Swakkies, you’re set to do the December holiday thing there. And if you’re part of the 99.9% of Namibians who have to run around at the last minute to find accommodation for Christmas (this part is for all the Swakopmund estate agents), I’ll take 5% on all sales, and no, Steve Brain is not an estate agent.

But, and this is a big but, December is not a good time to do your birding in Swakop. The light is invariably hopeless, as in zero sun, and the plethora of fishermen, quad-bikers and people preventing you from doing proper birding is simply innumerable. So when is the right time? Obviously in summer (to see the migrants), probably just before the big influx of tourists in December, and after the tourist rush from mid-January till April. According to you know who, April – when many of the migrants start donning their breeding colours – is a very good time.

As most of my family know, I am not a very good Swakop birder or, for that matter, holidaymaker. I would much rather sit at Nambwa watching an African Fish-Eagle (Haliaeetus vocifer) landing another tigerfish or even better, watching a Western Banded Snake-Eagle (Circaetus cinerascens) taking a big, fat, slobby black mamba for dinner. Somehow this just seems to me a more appropriate, relaxed and fruitful activity than waiting for the sun to show its face, or swearing at yet another quad-biker driving over my corgis. Willie (Gewone Willie as in Sombre Greenbul) and Lizzy prefer Swakop to the Zambezi holiday, because they can accompany us to Swakopmund, but not to the Zambezi Region.

To get to the birding part of Swakop: in this day and age spending the evening in the Brauhaus or Tug Restaurant is the best option for wining and dining. During the day the Village Café’s breakfast is a must. And if Andra is around, you’ll have the opportunity to see one of Namibia’s outstanding music export products. There are obviously many other options to consider, but thus far none of the other restaurants has ever offered me any special discounts, so let’s keep it simple.

For the keen golfer, the Rossmund golf course is a good addition to Swakop’s leisure activities. I do my annual golfing expedition to Rossmund during December, to the enjoyment and amusement of my co-golfer, Ian. Birdies and eagles are not that common during my one-off, extended visit to the golf course. Needless to say, an albatross does not feature in my golfing thesaurus. On the fairway of the 7th hole, there is often a Tractrac Chat (Cercomela tractrac race albicans) laughing at the struggling golfers, hammering away on the fairway, or in our case, in the rough. The reason I mention the golfing here is that Steve Brain is stationed at Rossmund, so if you lose your way on the fairway you can always pop in at the Brains for a cup of tea.

Sitting at Cobus and Marlize’s wedding ceremony on the beach in front of the hotel, I was amazed to see so many birds flying past. Were they looking at the ceremony (maybe they were part of the ceremony?) or was this their normal outing along the coast for the day? It was quite impressive, especially when a flock of probably over 500 Cape Cormorants (Phalacrocorax capensis) did a fly-past. I forced myself to stop listening to Pastor Frans Robberts’s sermon for a few seconds to watch this spectacle. When telling one of my friends, who has been living in Swakop for many years, about this, he said: “Ag, that’s nothing. Many years ago I saw a flock of cormorants flying by that kept on for two days.” So there must have been a slight decline in their numbers!

Probably the best place to do your birding in the Swakopmund environs is at the salt works just a few kilometres north of the town. Here I had the opportunity to see my first Chestnut-banded Plover (Charadrius pallidus) with Mark Boorman after my uninformed statement in an article on Walvis Bay a few years prior to this. Mark contacted me immediately and invited me to allow him to enlighten me on the finer intricacies of bird-watching in and around Swakopmund. Apart from various other coastal birds and waders, we saw a Common Redshank (Tringa totanus), (as common as haemorrhoids?). I obviously didn’t realise immediately that this was rather a special sighting, until I read in Roberts that this bird is quite an uncommon migrant. And I must admit that the salt works is not really the ideal setting for photography with salt in the background and salt in the foreground and salt even underneath the birds. However, birders have this tendency to hang around dodgy places, and while beggars can’t be choosers, if you really want to see a Chestnut-banded Plover, you must go with the flow.

In town the sewage works is a beehive of activity, and for many a Namibian this is an excellent place to catch up on sightings of Maccoa Duck (Oxyura maccoa), Cape Shoveler (Anas smithii), Hartlaub’s Gull (Larus hartlaubii), Grey-headed Gulls (Larus cirrocephalus) and Little Grebe (Tachybaptus ruficollis). I have to mention here that the odour is rather overpowering, but not too bad if you can live with the odd turd floating by. What’s more, if you’re not too lazy to drive out to Walvis Bay, you might even see a few waders and gulls looking for food among the droppings. 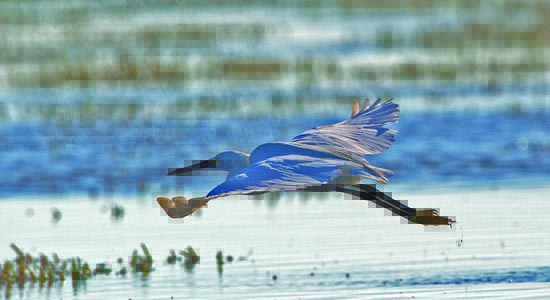 Summertime will enhance the bird count, with waders joining in to enjoy the overcast conditions. Although there is not much to add to the colour scheme, there are some interesting birds that will entertain the hardcore birder. Some of the regulars are the Red Knot (Calidris canutus), Ruff (Philomachus pugnax), Sanderling (Calidris alba), Little Stint (Calidris minuta) and Common Ringed Plover (Charidrius hiaticula) (not ringed by Dirk Heinrich), but I’m sure the serious birders will be able to add to this rather limited list.

On the C28 road to Windhoek you will cross the Swakop River, where you might well find the odd interesting bird, such as Kittlitz’s Plover (Charadrius pecuarius) and other plovers. The background is of a better quality than closer to the coast, and you might even have some sunshine to warm up your pictures. From here take the D1984 road to Walvis Bay. On your right-hand side you have an excellent chance of seeing Gray’s Larks (Ammomanes grayi) on the gravel plains.

Just south of Swakopmund is a favourite hangout for cormorants. This is by far the best setting for taking pictures, as it’s next to a Damara Tern (Sterna balaenarum) (not related to the well-known Hondebalia) breeding ground, and your chance of bumping into one of them hunting for food is quite good.

All in all, Swakopmund is an excellent holiday destination. For the serious birder there is always Batis Birding Safaris to show you around. Somehow the guides always seem to be enthusiastic about the birding in the area. As for me, I prefer the lush Zambezi Region for my entertainment, but Gewone Willie will agree that Swakop is rather special. I must admit, I’m a bad golfer, a bad swimmer and probably a very bad hardcore birder. Somehow I think (I might get killed for saying this) Swakop’s best birding spot is the Walvis Bay Lagoon.