“A living monument! Convoluted, bold and bizarre, enigmatic and captivating.” This is how Ernst van Jaarsveld and Ushi Pond describe this unique desert plant at the beginning of their beautiful 280-page book. 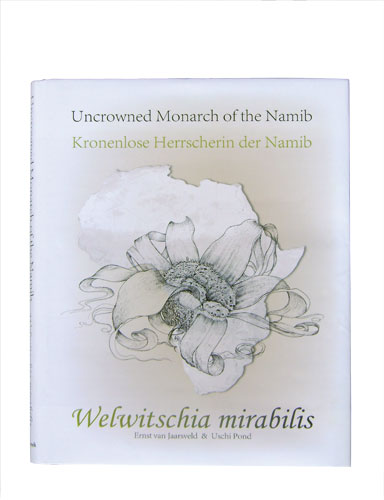 Anyone who has seen this amazing plant growing on the barren and windswept plains of the Namib, or crouched in a dry river wash that has probably not had water in it for the past decade or more, will not fail to come away awestruck by it. Described by some as ‘beautiful’ and by others as ‘the ugliest plant ever seen’, this extraordinary phenomenon of the plant kingdom will not fail to elicit some reaction of wonder from the observer. It is truly an awesome plant!

In its slightly more ancestral form it was around when we were still part of the Gondwana supercontinent – not that we, as humans, were around then! While the living plants are unique to south-western Africa, fossilised ancestors have been found in Brazil. Seemingly unchanged over the millennia, it crouches in the Namib, occurring in scattered populations from the Kuiseb River in the central Namib, extending into Namibe, the northern extent of the Namib in Angola.

As a monarch, it features on our Namibian coat of arms and adorns the fence around the presidential palace. Monarch it definitely is, not only because it is ancient, majestic, awesome and mysterious, but also because it is a botanical anomaly, and because it provides protection and shelter to a myriad of other desert organisms. Related to the ancient Gymnosperms (plants bearing naked seeds), it is the only species in a genus and family of its own. Since the Angolan populations have a number of slightly different features from the Namibian ones, the species has recently been divided into two subspecies, with the Angolan version called Welwitschia mirabilis mirabilis, and the Namibian one fittingly W. m. namibiana. 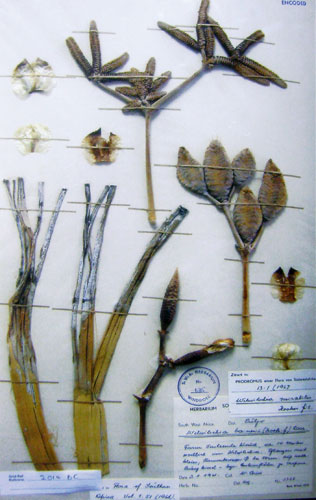 This strange plant, apart from being a living fossil, is unique in a number of ways, as outlined in the book. It shows links between the Gymnosperms (where, in Namibia, it is the only representative) and the Angiosperms (flowering plants with seeds enclosed in an ovary and fruit). Like all Gymnosperms, it bears its reproductive organs in cones, and has naked ovules and seeds. However, its male flowers (the sexes are on separate plants) are more like those of the Angiosperms.

Its most strikingly unusual feature is its large, leathery, strap-like leaves. Instead of being discrete entities with a tip and a base, attached to the plant by a stalk, with a finite lifespan after which it falls to the ground, as in most plants, the welwitschia has only two adult leaves in it entire life! These two are as broad as the stem, grow directly out of it on either side, and continue to grow for the life of the plant. Having neither base nor stalk, and with a tip that becomes dried out and frayed by the elements, or eaten by desperate herbivores, as well as becoming twisted as the stem contorts with age, this is a truly unique food-producing factory.

The ubiquitous chameleon and welwitschia

Welwitschias grow in one of the driest habitats in the world, where rainfall is irregular and low. It supplements its moisture by collecting fog water through its leathery leaves and channeling it down to the numerous fine roots just below the ground.

It is not my intention to write a treatise on this fascinating plant. This has been done most adequately by two enterprising welwitschiaphiles. The launch of their book this year was a celebration not only of this floristic monarch, but also of 50 years of botanical research, conservation and education by the splendid Kirstenbosch Botanic Gardens in Cape Town, where Ernst van Jaarsveld has spent the past 36 years.

Ernst van Jaarsveld, horticulturalist and botanist, has a deep love for the Namib and all its fascinating flora and fauna. His passion, enthusiasm and energy are contagious. Well do I remember my trip with him to Omavanda, a plateau high up in the Baynes Mountains of north-western Namibia, accessible only on foot. After a strenuous climb to the cave in which we camped – where I lay exhausted, trying to get my breath back and my head around the drop to the ground – Ernst still had the energy to rush out and find a number of new plants not recorded in Namibia before, and then come back to the cave, make a fire and produce a pot of much-appreciated tea!

Clinging to cliffs that made my head spin, he would crawl around like a rock agama or jump like a klipspringer, ever in search of those little-known cliff-dwelling plants, for which he obtained his doctorate. A very humble, gentle and caring man, his deep love of life seems to be transferred through his fingers to the plants he loving nurtures in his greenhouses at Kirstenbosch.

Ushi Pond I met for the first time the day the book was launched in Windhoek. I was immediately drawn to her as I recognised a fellow Namibian with a passion for this lovely, harsh land of ours. Born and raised in the mountains of the central escarpment, she has not lost her love of the vast open spaces, nor her respect for the fascinating flora and fauna of our country, despite living in the Cape these days. She is an artist, ecologist, traveller and publisher who, along with Ernst, has successfully captured and portrayed the magnificence of Namibia’s national plant – the icon of the Namib Desert.

The book is a mélange of interesting information about all aspects of the plant. It is a horticultural guide that is a tribute to the people who discovered it, described it and curated specimens of it, as well as to the artists who have drawn, painted, sculpted and photographed it. Much of the scientific data gathered over the years has been included, illustrated with beautiful photos of all aspects of the plant, from seeds to seedlings to senescence, its habitat and the other plants and animals that share its harsh desert environment.

Its importance as a keystone species of the Namib is illustrated in many captivating images. Maps have been included showing where to go to view these plants. There is a large, clearly illustrated section on how to cultivate it (although all parts of the plant are protected by Namibian law, and a permit must be obtained from the Ministry of Environment and Tourism to collect seeds and even old, dry stems). The text is written in an easily readable manner, with a glossary for those less familiar with the more technical terms.

A hybrid of a coffee-table book, comprising an informative text written in both English and German and containing an array of artwork, the book is a collector’s item that should be cherished by all who know and love this enigmatic plant. Welwitschia mirabilis, Uncrowned Monarch of the Namib is a magnificent publication that serves as a fitting tribute to a truly majestic plant.

Why the ‘uncrowned’ monarch? Well, you’ll just have to buy the book and find out for yourself!

21 Days along the Skeleton Coast with Namibia Wildlife Resorts