Conservationist of the year 2015

The presence of game rangers and hunters deters poachers, says Victor Katanga, the previous recipient of the NAPHA Conservationist of the Year Award. The winner of 2015, Geofrey Tukuhupwela, adds the involvement of local people and their commitment to look after the wildlife on their land to the success of anti-poaching efforts.

Big game concession holders in the Zambezi Region (previously Caprivi), nominated Geofrey for the award because they believe that without his dedication the anti-poaching and law enforcement success would be significantly lower in that part of the country. Koos Pienaar told us this hunting story, which illustrates the point.

“We start early in the morning, because of the heat later in the day and also to find fresh elephant spoor at the pans or the river where they come to drink. It is still dark when the beat of the African drum wakes the guests. They were briefed the previous night that the hunting party would leave half an hour before sunrise.

It is not easy to find spoor of old males, especially in the dry season when animals drink only at the river and hundreds of breeding herds congregate on the riverbank. Towards the end of the dry season the pans dry up and the river is the only source of water. If the males are the last to leave at night, we are lucky the next morning. Then the trackers will find a spoor to follow and we can start walking early in the morning while the sun is still at an angle. If the breeding herds drink after the bulls there is little hope of finding the spoor there.

In dense vegetation it is quite tense to walk up to elephant. That is where hunters get trampled if they are not careful. The bulls stand in the shade, dozing, and you don’t see them as you follow the footpath, or the spoor. The herd feeds in the bush, quietly as only elephant do. If you surprise them you have a problem. You have to retract your steps slowly and circle to find another approach, with the wind in the right direction. The hunter needs to come close enough to judge the tusks. Sometimes the party walks for days and sees many elephant before the hunting guide selects the right one.

Two years ago a hunt that started in the usual way took a rather traumatic turn. Not because of anything to do with the hunting adventure, or the way in which we conducted the hunt in what the hunting fraternity still refers to as West-Caprivi, but because within the first eight days we came upon the carcasses of seven poached elephants. It is difficult to explain to a guest how this is possible in a country where we boast about our conservation successes and our excellent anti-poaching track record.

Don’t think that it is easy to spot an elephant carcass. Imagine a 741,000 acres (300,000 ha) stretch of land with dense vegetation, 62 miles (100 km) long and 27 miles (38 km) wide. That is the size of the concession area. You are lucky, or in this case unlucky, to chance upon a carcass. Of the seven carcasses we found, some of the tusks had already been hacked out, some had been left to be taken out once the carcass has decomposed and in some instances it was obvious that the poachers had been disturbed, probably by one of our vehicles, because they had clearly left the scene in a hurry.

When we received our first concession in this part of Namibia we realised that our anti-poaching efforts could only succeed if we worked with the local communities. While we had our concession in the Eastern Caprivi (Zambezi) we met MET game ranger Geofrey Tukuhupwele, based in Bwabwata National Park West. It soon became clear to us that without him, his team and the local people who provide information it would be impossible to catch poachers and bring them to trial. 80% of the recent success in apprehending poachers is due to dedicated rangers like Geofrey. His knowledge of the area, people on the ground who trust him, and his experience with law enforcement ensure that cases go through the justice system.”

Working with communities is nothing new for Geofrey. In 1997 he was involved in the process of setting up the Mayuni Conservancy with Garth Owen-Smith of Integrated Rural Development and Nature Conservation (IRDNC), a Namibian NGO that strives to improve the lives of rural people. He is a respected figure and a role model and works hard for what he believes in. He was unit co-ordinator for IRDNC and started anti-poaching units in Mashi, Mayuni and the Wupara conservancies.

Geofrey’s dream is that game guards in conservancies are educated in law enforcement to protect the wildlife and other natural resources, because that has the potential to alleviate poverty and create jobs. He also realises that traditional authorities must buy into the value of conservation and that it is important for rural people that living with wildlife has benefits for them. “But most importantly we all need to be on the same page”.

Geofrey Tukuhupwele – conservationist of the year 2015

Sometimes the carcass of a poached elephant is only discovered long after the incident. By then it has no value to the community. The ton of meat and the potential cash income from the trophy hunt are lost. 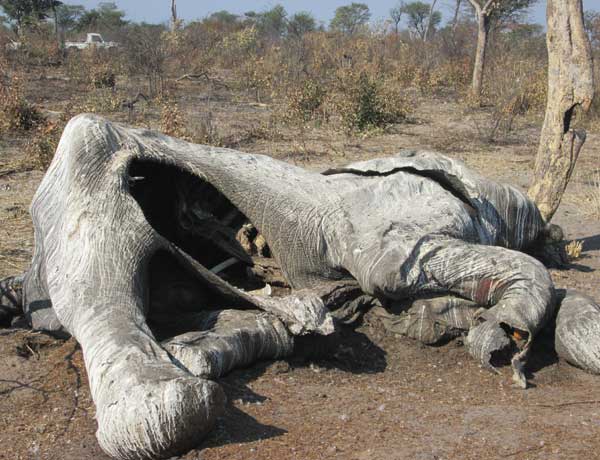 Poachers sometimes put poison in the carcass to kill the vultures that feed on it, because vultures circling in the air are a dead giveaway to hunters in the area that there has been a kill. 63 vultures were found dead at a carcass recently.

Often poachers kill an elephant to discover that the tusks are too small to bother. Or they leave the scene without taking the ivory, when the anti-poaching patrols get a tip-off and are about to surprise them.

MET rangers teach communities about the horror of snares. These are examples of what the rangers find during their patrols in areas where villagers are ignorant, don’t benefit or are not involved in the national efforts to stop poaching.

When concession owners or their staff hear shots, investigate and find a carcass, they call MET and the police immediately. The quicker they react, the higher the chances of apprehending the poachers.