A new face for Torra Bay

Boost your blood temperature during winter

The minutes tick by as you energetically lift your legs to the beat of your heart, dodge rocks, clamber over large boulders, criss–cross the river and calculate your next move, allowing yourself only a split second to slow down and catch your breath before the adrenaline kicks in again.

This, needless to say, would only be the case if you had the guts to tackle the 96-kilometre non-stop self-supporting race known as the Windhoek Lager Fish River Canyon Ultra run in the Fish River Canyon – the second-largest gorge on the planet. This race is recommended for seasoned ultra-distance runners, as competitors are expected to finish the race within 24 hours.

Descent into the Fish river canyon

It should be kept in mind that distances can vary due to environmental factors and that it’s up to individual runners to navigate their own way through the course. Fortunately, “Wind is not really a factor down in the canyon,” but unfortunately “…the route is very tough and demanding, and will take everything out of the competitors,” says event coordinator Tinus Hansen of African Extreme Promotions.

Luckily for the not-so-daring adrenaline chasers out there, the race format was adjusted this year to include a ‘lite’ version, providing an additional 65-kilometre option. Not that this alternative makes the route any easier – you’ll still have to traverse the mighty Fish with all its hard-core obstacles – but at least you’ll be spared a great chunk of the mad runners’ journey.

The ultimate rush through the Fish starts at the top of the Canyon where the first evening is spent on the edge, treating runners to the romance of glorious panoramic views. (And you’d better soak them in, because the actual run is going to allow no time for gazing in awe at spectacular natural beauty and landscapes.)

On Saturday morning, one hour before the sun starts lighting up the skies, competitors will have to be out of their sleeping bags and geared up to head cross-country until they reach the point where they descend into the canyon. Once on the canyon floor, contenders have to negotiate terrain varying from thick, soft river sand to hard-trodden animal footpaths and the daunting boulder fields that seem to go on forever. 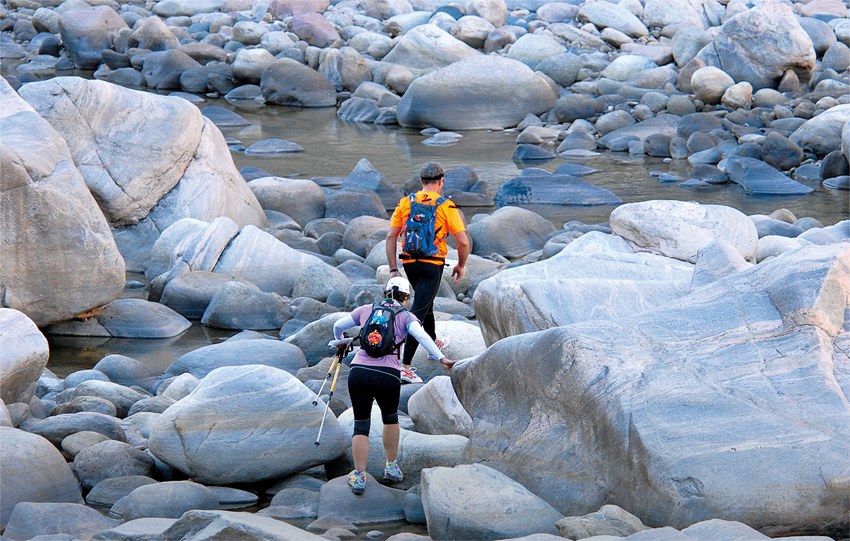 Hikers in the canyon

Runners follow the water, with an occasional detour via widely meandering bends in the river, and eventually finish at the soothing hot springs resort of Ai-Ais. Finally! At last you can kick off your trainers and sink back into a comfortable sitting (or lying) position, while your muscles recover from the challenging strain of what is regarded as the ultimate Fish River Challenge.

As this insane caper takes place on 22 June, you would have had to don your trainers months (if not years) ago, in which case this year spectating would be a decidedly better option.