Friendly encounters – the correct way to see a rhino

Slackpacking in the Khomas Hochland

The Dune Five – Five tiny critters to find in the desert

After three hours the rhino trackers had found them. We parked behind a euphorbia and tried to crunch quietly over the stones to a spot where we could see them: wonderful, it was Topnotch, the cow, and her calf  Troy – he’s just a year old – and they were making a good breakfast out of some bushes. The two were 200 metres away and completely unaware of us. And that’s the point…

I n an increasingly virtual world a ‘real’ adventure has become rarer than … well, rarer than a desert-adapted black rhino. This unique population, found in the remote north-western Kunene Region of Namibia, is the largest black rhino population in the world to have survived outside of a formally protected park and increased its numbers. And tracking a “desert rhino,” as they’re commonly known, through the starkly beautiful Palmwag Concession is an experience that can be classified as once in a lifetime.

The luxurious base of this encounter is Desert Rhino Camp, an inspiring story of modern conservation success, bringing Wilderness Safaris, Save the Rhino Trust (SRT) and three conservancies (Torra, Sesfontein and Anabeb) together for the conservation of the desert-adapted black rhino. It is an example of how the private sector, NGOs and local communities can work together to ensure a future for Africa’s wildlife.
Desert Rhino Camp is the base for one of SRT’s tracking teams and pays for its running costs, while SRT is responsible for rhino activities and monitoring. Wilderness provides financial support to the conservancies in the form of lease payments and guest levies. Thus, every guest of Desert Rhino Camp actively helps to finance rhino conservation.

Back to the adventure. As with all wildlife viewing, a certain amount of luck is needed. Even here, where the animal in question is being tracked by professionals who know every individual in the concession, sometimes it can take a while – or more than a day – to find one. A successful sighting is not dependent on great timing or even the animal. It’s success is based on the whole operation and the people who are involved.

The SRT trackers are fascinating. The night before, around the campfire, they explained the delicate nature of the tracking and viewing operation to make sure we understand this is more than a sighting – it is an experience where the animal comes first. Jasson, Martjyn and Albertus have chosen this profession, over easier ones perhaps, in their commitment to their critically endangered charges.

The black rhino is known to be shy and easily agitated, moving away from people when disturbed, which often leads them to move out of protected areas into places where poaching can occur. Therefore, if a rhino becomes aware of tourists watching, it may well take off in a hurry – and the whole point of the exercise is defeated.

There is a delicate balance to be weighed here: between Wilderness Safaris offering a world-class rhino conservation experience that allows guests to view the rhino in its natural environment – while at the same time ensuring the safety of the rhino and tourist, and also enabling SRT to collect critical monitoring information.

Based on research carried out since 2005, Rhino Viewing Protocols have been established to help achieve this balance. Aspects such as the ideal viewing distances from the rhino, best time of day to go tracking and how often the same areas or individuals can be tracked to not disturb them, are taken into account.

What a special sighting we had: not one rhino but two, a mother and her youngster, browsing peacefully as we watched intently, while Jasson made notes about who they were, how healthy they looked, what they were doing, etc… and then we left, the two grey animals being none the wiser.

The human element in this conservation effort is extraordinary. Chatting to the trackers over lunch, we learnt more about their dedication: Jasson worked at another camp in maintenance, but felt he wanted to do more, so he joined SRT. Albertus has a farm, but left it to come and protect the rhino. Martyn has been a tracker for 12 years and feels it is his calling. Indeed, all at Desert Rhino Camp see their work as something more than just a job.

That night, the staff gathered to dance and sing. Lilting voices told us, “Thank you for coming – without you, we could not save our rhino.” And then they sang what they call their “rhino song” to the tune of Nkosi Sikelel’ iAfrika, eyes closed and hands together, not in prayer but in the shape of a rhino horn. The harmony of the beautiful voices, the smiles flashing in the light of the fire, the fervour of their devotion, combined with the memory of Topnotch and Troy as they went about their lives undisturbed yet protected, created an atmosphere that moved us all to tears.

More than an adventure, this is a journey of the spirit, an encounter not just with a unique animal but with some very exceptional humans. 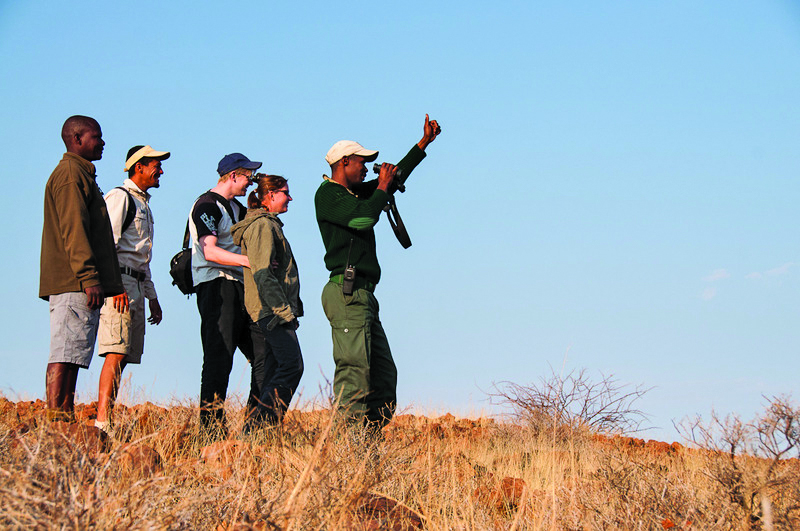 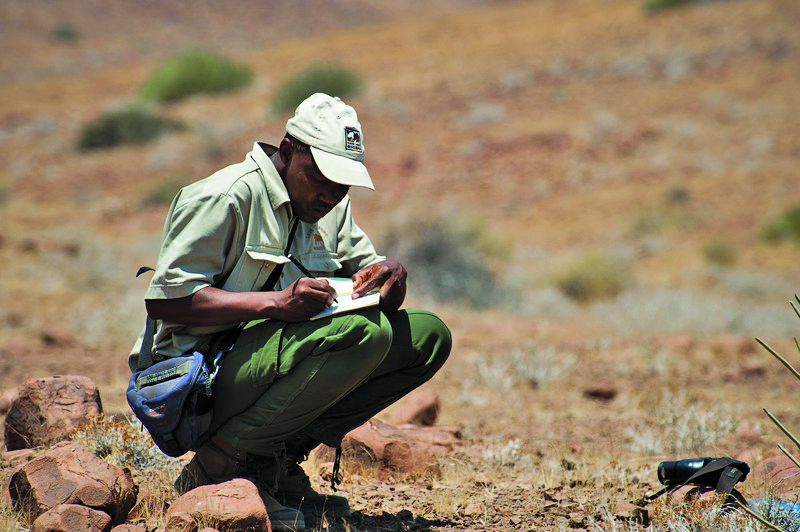