Generation Wanderlust goes on an adventure in Sossusvlei

SAND, SWIMMING HOLES and the magnitude of the moment

In the autumn issue of TNN, with our trip to Mahango Game Park, we were able to establish that travelling through wonderful Namibia is an adventure open to the youth, too. The Generation Wanderlust epidemic is well underway and I note this with childlike delight when I see young guys and girls at the Solitaire petrol stop filling their dust-covered Toyota Corollas, or a young couple from somewhere far away changing a tyre of their rented self-drive vehicle, probably their first solo tyre change. As we know, Namibia isn’t famous for its successful AA  enterprise like some European countries are.

It’s not just a foreigner here and there who has trouble judging our deceivingly well-managed dust roads. At least this was the thought that crossed my mind as I watched poor Sean and Abe change a punctured wheel of my making. We were only 10 minutes away from our first campsite on a trip to Sossusvlei when I misjudged a seemingly shallow ditch in the road and sent the bakkie bouncing, followed soon after by the tell-tale noise of rubber no longer bound in its all too necessary shape… The guys changed the tyre as Karin and I stood by, dutifully handing them the odd wrench and jack when needed. After shaking the dust off their clothes and listening to my rambling excuses about how no-one could possibly have seen the ditch and how it really wasn’t only my fault, the teasing began and we set off for the last 20 kilometres to Little Sossus Camp – where we discovered a slow-puncture in another tyre.

Not the best start to a trip, but luckily we were in for quite a magnificent experience, the magnitude of which we had not expected or even registered at the time.

SUNSETS & CAMEL THORNS
Setting up camp at Little Sossus Camp is almost too easy. Every campsite comes equipped with a roof, three walls, two bathrooms (complete with hot water) and a kitchen area with a sink and electrical sockets. We didn’t even bother to pitch actual tents, but rather opted for setting up our stretchers and mattresses underneath the ready-built canopy (not that we expected any rain) and spent the night snoring into the open desert air. Our campsite even had its very own waterhole, no further than 20 metres from our fire pit.

About 20 minutes’ drive from Little Sossus Campsite, hidden between rocky hills, a small canyon-like swimming hole resides on the farm Hauchabfontein. The beautiful clear spring water of this desert oasis is a wonderful respite from the heat. We decided we’d spend a few minutes cooling off before heading back to camp. We dived in and the planned “quick dip” turned into a few hours of lazing in the water, gin and tonics in hand, making friends with a few tourists from Australia, and putting my new GoPro and its waterproof housing to the test as we jumped from a high rock into the cold clear water. Later that afternoon, back at Little Sossus, we set off on a self-drive. We saw grazing gemsbok, inspected the mystical fairy circles, for which the area is so famous, from up-close and watched an amazing Namibian sun descend behind a camel thorn tree and disappear over the horizon.

Inspecting a fairy circle from up close. Photo ©Elzanne Erasmus 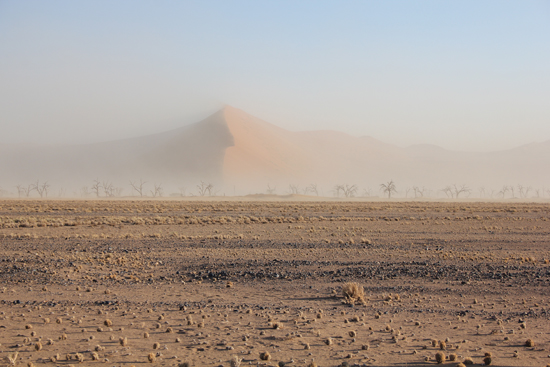 A camel thorn tree with a sociable weaver nest in front of a classic Namibian sunset. Photo ©Elzanne Erasmus

MORE THAN WORDS
You can use many eloquent words to try and describe the pure wonder and grandeur of Sossusvlei. You can write novels about the colours, textures, the loneliness that you find in this eternity of sand and dust and gigantic skies. You can try to capture the beauty on film but nothing will compare to reality. Maybe Sossusvlei doesn’t exist. Maybe it’s not reality. Maybe Sossusvlei is a myth, a dream shared by strangers and friends, a fairytale to tell those who haven’t experienced the dream. Maybe us dreamers will try to sing its praises (literally) or write endless lines of poetry on the subject. Maybe we’ll submit you to hours of retelling tall tales about even taller mountains of sand, repeating the lines “You have to see it to believe it” or “You probably had to be there”, just to get you to come within an inch of understanding the magnitude of the moment we experienced. That’s the closest you’ll ever come to grasping the reality of this one-of-a-kind place (or parallel universe), because words will never suffice.

We gained this titbit of knowledge when we visited Sossusvlei the next morning. After paying the small entry fee at Sesriem (N$10 for Namibians, N$30 for SADC residents and N$40 for foreigners) we made our way into the park. Gates are open between sunrise and sunset. The first 60 km of the road between Sesriem and Sossusvlei are tarred but the last 5 km are accessible by 4×4 only. There are shuttle services available for those who don’t want to walk those last 5 km, or those not brave or well-versed enough to take on the thick sand of the off-road terrain. When you finally reach the end of the road, however, it is all too clear to see why Sossusvlei is one of Namibia’s most popular tourist attractions, second only to Etosha National Park. Don’t be misled, though: it’s an equally big attraction for locals. Many Namibians make the trek to Sossusvlei on a regular basis. Some, like myself, even consider it a sort of pilgrimage to a desert landscape Mecca. Once there you have two options: a) easy or b) not so easy.

The easy option is to head up a footpath in the sand, over a small dune and straight into Dead Vlei, a desiccated white pan dotted with the skeletons of petrified camel thorn trees. The second option is not for the faint of heart, or weak of knee, but is my highest recommendation by far! Big Daddy is presumed to be one of the highest dunes in Sossusvlei, and the world for that matter. At approximately 325 metres high, it’s no easy climb, but if you’ve arrived early enough (around 6 am is a good time), had a proper breakfast and have a keen adventurous spirit you should definitely give it a go, which is exactly what us four Wanderlusters decided to do…

The view of Dead Vlei from the top of Big Daddy. Photo ©Elzanne Erasmus

LET’S BE ADVENTURERS
We were a quarter of the way up when I realized that this wasn’t a hill… it was Everest, albeit a very dry and hot one. The previous night’s red wine wasn’t helping much either. But the plan was set and the gleaming Namibian sun was creeping ever closer to the horizon, bringing along with it what was sure to be another day of stinging hot rays and 40°C desert temperatures. So we pushed forward, trying to outrun the sun and heat and reach the summit with skin as close as possible to its current hue, and blood at a safe non-boiling temperature.

The view from the top was unreal, like something that should have been in a Gustav Klimt painting with its mosaic of colours and textures and the unexplainable romantic aura.

From the top of Big Daddy you can fool yourself into believing that the edge of the horizon and the curve of the earth is visible. As far as the eye can see there are sienna dunes dotted with white pans under a clear, unbelievably blue sky.

We sat up there, along with a few other dune explorers, and stared at the spectacular star-shaped dunes. The view aside, the most fun we had that day was definitely the run down. As you peer down the side of the dune face the edge of the white clay pan doesn’t look too far away, but once you start your descent you realize that the uphill journey took two hours with good reason. The run down probably takes much longer than one would expect, but at least you can thank the stars for little things like gravity and declining slopes, things you hated a few hours earlier. I was even lucky enough to spot a golden wheel spider (Carparachne aureoflava) rolling down the dune next to me.

SITTING ON THE CORNER OF AWESOME AND BOMDIGGITY
We took a long stroll around Dead Vlei when we finally got down and sat in the “shade” of the petrified camel thorn trees. The vlei is a photographic haven and any photographer’s dream destination. It would not be possible to take a bad photo here, even if you tried. I dare you! Around the campfire that night we talked again of how amazing this country we live in is. We talked about sunsets and swimming holes and how spectacular it was to sit atop that dune. We realized that it wasn’t going to be an easy feat to describe our experience to others, because nothing had compared to that gigantic moment on that mountain of sand. It was probably one of those “You had to be there” instances. In that moment Namibia was the most beautiful place on earth, the epitome and the ultimate. And we had been standing on the very peak of it and in that moment we were the kings of the world. We were infinite and untouchable, surrounded by nothing but the majesty of nature, forever lost to the magnitude of the moment… TNN

Sitting on top of the world – 325m above sea level. Photo ©Elzanne Erasmus

“Selfie” time at an oasis in the largest living desert. Photo ©Elzanne Erasmsus

Hauchabfontein is a great camping spot or stopover if you want to link a trip to Sossusvlei with a visit to the Naukluft Mountain section of the Namib-Naukluft Park. So next time you’re in the surrounds and a bit hot under the collar, be sure to go for a quick dip, explore the quiver tree forest also found on the farm or go on a 7 kilometre hike through the beautiful Naukluft wilderness.
Road D 854
Tel/Fax: +264 (0) 63 29 3433
Email: irmi@mweb.com.na

Book your next Sossusvlei adventure through StayToday. At www.staytoday.com.na you can choose from over 20 different lodges in the area.

Missed the first installment of the Generation Wanderlust series? Find it online at www.travelnewsnamibia.com/news/generation-wanderlust-mahango-game-park