Generation Wanderlust Damaraland – Leave only your footprints behind

Enjoy a green holiday in Namibia

Archer’s Land – Sport in the bush

Fernweh (n). a longing to travel, missing a place you’ve never been

In the first instalment of the Generation Wanderlust series I gave the definition for wanderlust, a strong desire or urge to wander or travel and explore the world. Now I have happened across another linguistic treasure, Fernweh. It’s a German word which literally means “an ache for distant places”. The word enthralled me and made absolute sense. It is not a need to escape your everyday life but rather a burning curiosity for places yet to be discovered, things to be seen, people to be met. And it is this burning curiosity that drove us young explorers to Damaraland, in western Namibia, for another adventure.

THE MOUNTAINS ARE CALLING AND I MUST GO

It’s a spectacular view from the top of a dolomite koppie in Damaraland. The scattered rock formations protrude like giant molehills from the vast flat landscape, and at the foot of one these heaps of boulders lies the campsite of Mowani Mountain Camp where we spent the first night of our newest fernweh-driven expedition. After we had set up camp and unpacked our two vehicles (our group had grown since the last time) we set off in search of the perfect sundowner spot on the molehill’s summit, two Labradors in tow. Yes, I brought my two Labrador puppies along on the trip, for they, too, are young and curious and aching for new adventures. Many people might tell you that Namibia is decidedly not dog-friendly when it comes to travelling about. While this is true for national parks and conservation areas, many accommodation places along Namibia’s dirt roads don’t mind your canine friends as long as they are well-mannered and don’t disturb other guests. Be sure to check their behaviour before you set off from home with them in the back. So, with the dogs bouncing from rock to rock ahead of us we carved a path up the mountainside and found a spot under a quiver-tree, or was it a moringa? I’ll look it up in Sean’s book Trees and shrubs of Southern Africa. From up there the landscape stretched out before us and the curve of the earth appeared to be visible in the distance as the sun descended beyond the horizon on its next trip around the rock.

OF ALL THE PATHS YOU TAKE IN LIFE, MAKE SURE A FEW OF THEM ARE DIRT

From Mowani it’s only about a 25-minute drive on beautiful gravel roads to Twyvelfontein in Damaraland, one of Namibia’s most popular and eco-conscious tourist destinations. Twyvelfontein is the site of one of the largest collections of rock engravings in Africa, dating back some 6000 years. In 2007 it became Namibia’s first UNESCO World Heritage Site. It’s World Heritage status as well as the measures which the Natural Heritage Council of Namibia has put into place to protect the area have gone a long way to preserve the magnificent rock art for future generations. Our guide, Raymond, did a fantastic job intriguing us and endearing the spectacular place to us that we were lucky enough to find ourselves in. He enjoyed the fact that he could speak to his latest group of tourists in Afrikaans, and even in Damara to Abe… The dogs stayed with the lovely ladies who man the base camp and found their names, Willem and Simon, very funny.

The next part of our adventure involved rivers and dust and a search for very large mammals. Famous for its populations of the rare desert-adapted elephants, we planned our Damaraland trip around the idea of camping in the Ugab River. Our road there from Twyvelfontein was bumpy and rough, with a quick detour down the Aba-Huab riverbed after some misinformation about a potential elephant sighting. Eventually we did reach the Ugab, as dry as only rivers in Namibia could be, lowered the tyre pressure and got on our way to find a camping spot.

The thing about the Ugab is that it is no great secret. Namibians, and many South African self-drive tours, have been scouting up and down the river for years, and this is evident by the many tracks they have left behind. It is sad to see a natural eco-system disturbed to such an extent, but even though Namibia is currently going through a drought my disappointment was somewhat appeased by the knowledge that someday rain will once again fall in the catchment areas further inland and that the water making its way to the Atlantic will wash away the remnants of human curiosity. In spite of this, however, if you ever make your way through a Namibian riverbed in a 4×4, try to stick to the existing spoors and tracks as far as possible, even if it’s just for aesthetic reasons.

BLESSED ARE THE CURIOUS, FOR THEY SHALL HAVE ADVENTURES

The course of the Huab follows along the edge of Namibia’s highest mountain, the Brandberg, and in its shade we found a swimming hole fed by a natural fountain in the dry riverbed. The cool clear water was a welcome respite from the scorching sun on this hot afternoon, and as we explored the rocks and birds and animal spoor along the river banks the dogs plunged into their new favourite place in the world, chasing fish and having a blast. A few kilometres downriver we found an overhanging cliff to camp under. It’s never a good idea to camp too close to water sources frequented by animals as you disturb them and expose yourself to the possibility of being disturbed by them. As spectacular as 5-star hotels and lodges are, I always love the thought that us camping enthusiasts get to spend the night in a 10-billion-star resort! From the banks of a river in the wilderness you can gaze up in absolute wonder at the Milky Way stretching across the undisturbed Namibian night sky. The key to future enjoyment of places as wild as Namibia’s dry rivers lies with us though: the privilege could easily be taken away if we do not make sure that we act as responsibly as possible and stay cool…

GREEN IS THE NEW BLACK

I feel that the key to being a good and responsible explorer of natural places is to always make sure that you keep the golden rule in mind: Cool or Not Cool. This rule or credo is easy to adhere to as you base it mostly on your own experiences. For example, upon arrival at our campsite for the night we discovered that others had been there before us. The evidence of their intrusion on nature was there for us to see. Leaving tinfoil next to open coals and not packing your empty soda cans is totally Not Cool. Nor is not burning your toilet paper after you’ve answered nature’s call. There are so many easy ways to be a Cool explorer. For one, make sure to take your own wood. It’s Not Cool to break down or tear the limbs from centuries-old Ana trees for your braai. Remember that large fires are unnecessary – leave bonfires for the movies. Keep your noise levels down and don’t disturb furry friends. And last but not least make sure that everything you brought into nature goes back with you, following the old but wonderful cliché: Take only pictures, leave only your footprints.

Small hilltops interrupt the vast plains of Damaraland, providing magnificent viewpoints of endless horizons if you’re not afraid of a little climb.

Our guide, Raymond, shows us an ancient Damaraland classroom.

Rock art at Twyfelfontein is over 6000 years old.

Natural fountains in the Ugab, Damaraland are great swimming spots.

Tall Damaraland reeds make for tricky thoroughfares in some areas. 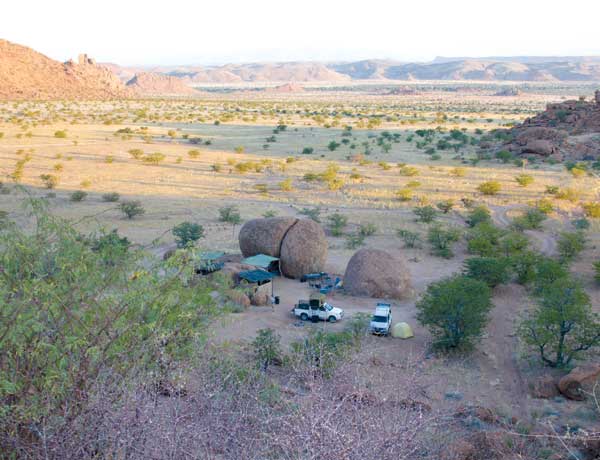 Mowani campsite from a dolomite peak.

LOVE HER BUT LEAVE HER WILD

Populations of desert-adapted elephants can be found in Damaraland and the Kunene Region north of it. Although they are the same species as the African elephant, seen in Etosha National Park, the desert elephants have longer legs, are taller and have larger feet, to be better suited to the soft sand in their environment. These elephants have more cautious and particular feeding patterns. They rarely fell trees, break fewer branches and drink only once every 3 or 4 days, whereas an average African elephant found elsewhere normally drinks between 100-200 litres of water a day. When you come across a desert elephant on your journeys be sure to follow the steps below:

We weren’t lucky enough to spot any elephants on this trip but they are a magnificent sight to behold. Book a guided tour with one of the lodges in the area to increase your chances and to make sure that you have taken the least intrusive route to enjoying this wonder.

WHEN WAS THE LAST TIME YOU DID SOMETHING FOR THE FIRST TIME?

Don’t miss these awesome activities or hotspots in Damaraland and beyond: