Six species of vultures are known to breed in Namibia.  With the Egyptian Vulture recently extinct in Namibia, and the Cape Vulture nearly so, all the remaining vulture species – Whiteheaded, Hooded, Lappet-faced and  White-backed – are now also critically endangered in Namibia.

Poison has been the biggest threat to these scavenging birds in southern African over the past few decades.

Typically, commercial livestock farmers indiscriminately used poisons like strychnine to kill mammalian predators such as jackals, with the result that vultures were often the indirect victims of such poisoning activities. 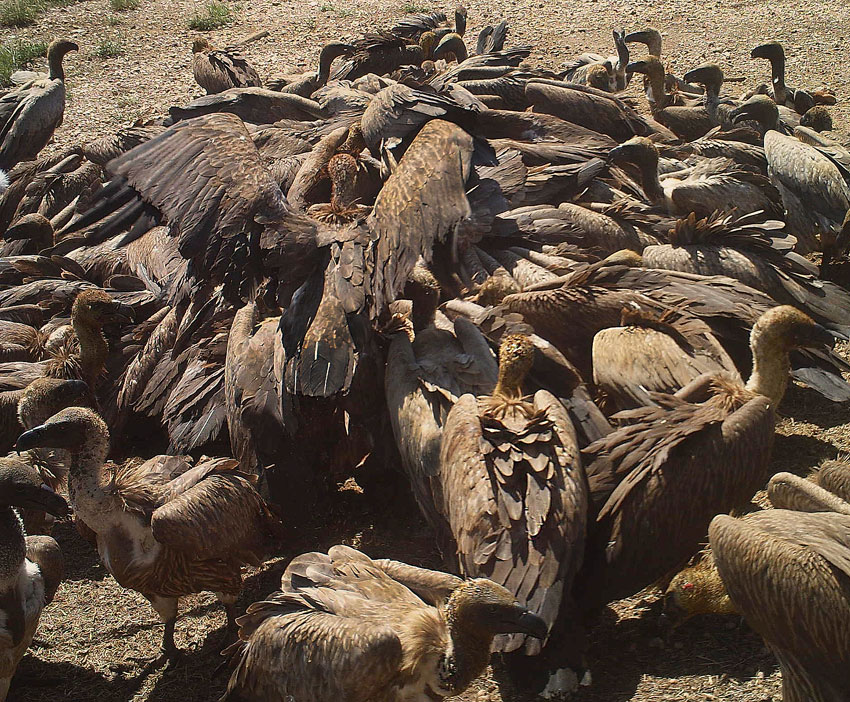 These days, in Namibia and elsewhere, the value of scavengers such as vultures has increasingly been recognized by land owners and managers. Farming activities have diversified, and vultures are appreciated for their many useful roles, including the fact that when spiraling over an area they alert a land manager to mortality of livestock or game in the field.

Sadly, it appears that this aerial spiraling is also the reason for a horrible new trend in Africa; poachers kill vultures with fast-acting poisons to avoid immediate detection. These mass poisoning events are not caused so much by farmers, small-time meat hunters or traditional medicine (‘muti’) traders anymore, but by the perpetrators of wildlife crimes such as the illegal elephant ivory and rhino horn trade.

Report your sighting of a tagged vulture

The resultant carcasses are large, and can attract hundreds of scavenging birds.  The latest mass vulture poisoning in Namibia’s Bwabwata national park killed some 400-600 birds in July 2013. These birds came to feed on a poached elephant carcass deliberately contaminated with poison to kill them.  This is not the first mass poisoning incident by poachers in the area, nor is Namibia alone in this devastating scourge, with Botswana and South Africa also having experienced large scale poisoning events this year.  Given vultures’ ability to fly great distances, vultures from anywhere in southern Africa can become victims of such poisoning events.

Throughout southern Africa, bird ringers have been catching and marking vultures using metal rings with identifying color rings or wing tags for more than 30 years.  In Namibia some 3,000 vultures have been marked in this way. The reason for this marking activity is to better understand aspects of vulture movements, biology and ecology, with long-term conservation and protection in mind.  Conventional recoveries of marked birds from incidental re-traps and re-sightings, or finding dead birds, usually account for no more than 0.1 – 3% of birds ringed, yet provide valuable information about these species, thanks to the recovery reports provided by mostly interested citizens, or more appropriately, citizen scientists.

A melee of vultures

One way to encourage citizen science by mostly non-scientist citizens, is through scientists collaborating with software developers to provide a friendly internet-based platform where citizens can contribute to a joint venture that manages, utilizes and grows citizen science projects. To further scientific knowledge, a collaborating public use their time, resources, abilities and energies to assist with environmental issues by reporting information on a ‘crowd-map’.  Crowd-maps designed for specific conservation action will increase knowledge, and strengthen public participation on environmental issues.

Vultures Namibia is using a free online crowd-map to engage Namibia’s farmers and land managers, adventure tourists on safari and tour operators to report re-sightings of tagged vultures.  This new crowd-map can be found at  https://vulturesresightings.crowdmap.com,  and will allow us to map re-sightings of threatened and endangered vultures species in order to gain maximum information for direct conservation action.

Within a period of just a few months, the vultures re-sightings crowd-map has been able to accumulate records of some 150+ re-sightings of marked vultures. This already represents nearly 5% of all vultures marked in Namibia!  Not only that, but vulture nestlings ringed in the Kimberley area of South Africa have also been re-sighted in Namibia and northern Botswana, emphasizing the need to strengthen efforts for full regional cooperation when dealing with all the threats to scavenging birds of prey such as illegal use of poison.

We expect a lot of people to become aware of the plight of vultures and other avian scavengers, not only in Namibia, but also South Africa, Botswana, Zimbabwe and Angola. By using a mixture of crowd-mapping, crowd-sourcing and some social media attention – blogs, Facebook (http://www.facebook.com/seevultures) and Twitter (#seevultures) this very first bird conservation crowd-map is clearly helping our vulture-awareness campaign!

When next you see a tagged vulture, please ‘crowd-map’ your re-sighting!

Text by Liz and Joris Komen. Photo Credits – all NARREC (http://www.narrec.net)  except for WBV headshot by John Paterson]