Heritage hour in the city

Namibia’s capital has several historical sites that are well worth a visit. So take a day or two to learn more about the city’s diverse legacy. Here are a few tips to enthuse you about exploring heritage sites in Windhoek.

In one complex Elisabeth House reflects an architectural symbiosis of two different buildings designed by two German architects of the colonial period. It was used as a maternity ward from 1908 to 1981, during which time 12 669 babies were born within its walls. The building is currently used by the Polytechnic of Namibia.

Erected in memory of the Boer Bittereinders, Afrikaner trekboere who moved to German South West Africa to escape living under British rule, this memorial can be viewed in Bismarck Street.

This historical building acts as the administrative headquarters of the National Museum of Namibia.

Heroes’ Acre serves as a memorial for the many brave souls who played a role in the fight for Namibia’s independence, freedom and democracy. It is located about 10 km south of the city. 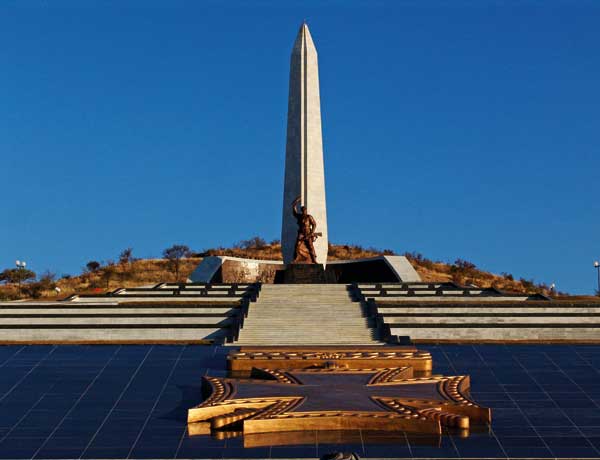 Marked by the narrow-gauge locomotive, vintage 1900, which used to work the old line between Swakopmund and Windhoek, the station was built in 1912/1913. It houses the TransNamib Railway Museum.

The Turnhalle (Gymnasium) was where the Turnhalle Conference (Constitutional Conference of SWA/Namibia) had its first session in 1975. In 2003 the main section of the building was renovated to house the SADC (Southern African Development Community) Tribunal.

8 OFFICE OF THE OMBUDSMAN

Built in 1906 as a residence for senior government officials, the house was converted into offices following independence.

This quaint cathedral at the top of Conradie Street – conjuring up visions of an English town – is the smallest functional cathedral in Southern Africa.

A renovated version of the original house occupied by the South African administrators of the former South West Africa, is now the official residence of Namibia’s prime minister.

Meaning Ink Palace, this is Namibia’s original Government Building, completed in 1914 in time for the first session of the Landesrat. Today it accommodates the current Namibian Parliament. In front of the Tintenpalast are the Parliament Gardens.

A memorial sculpture by Namibian artist Dörte Berner marks the spot where prehistoric elephant remains were found around 1962. The actual remains are stored at the National Museum of Namibia in Windhoek.

Also known as the Witbooi Memorial, the monument commemorates the German-Nama wars fought from 1893–1894 during the early years of German colonisation.

Built in neo-Romantic style, sporting two impressive peaked towers, the cathedral’s cornerstone was laid in 1903. The building was extended in 1931 and again in 1971.

Mounted on steel columns, a collection of some 30 specimens of the meteorite shower that struck the earth in the vicinity of Gibeon many years ago can be viewed in Post Street Mall.

On the corner of Independence Avenue and John Meinert Street is one of Windhoek’s well-known landmarks – the bronze kudu sculpted by Professor Fritz Behn of Munich, which was unveiled in the early 1960s to commemorate a period when rinderpest struck Namibia’s kudu populations and nearly wiped them out.

Officially consecrated in 1910, the Christuskirche is the oldest Evangelical Lutheran Church in Namibia. While built in the neo-Romantic style, it also displays elements of art nouveau.

Dedicated to Namibia’s struggle for independence, the museum hosts historical displays and the Independence Collection.

Consisting of two sections, this cemetery hosts the graves of soldiers, officials of the German administration, early settlers and civilians, as well as 157 people who died during the influenza epidemic of 1918.

The Equestrian Statue, popularly known as the Reiterdenkmal, honours the German soldiers killed in action during the colonial wars of 1904–1907, as well as those who succumbed in the Kalahari expedition of 1908.

The erection of the Alte Feste (Old Fort) started in 1890 to protect Captain Curt von Francois and his troops from attack by hostile locals. It was completed in 1893, and extended to its present shape in 1901.

The Old Location Cemetery served Windhoekers from 1927–1960. There are about 12 000 graves in the cemetery, including a historical mass grave for 11 inhabitants who resisted being relocated in 1959 and were gunned down by the South African authorities.

This imposing building is the only development after independence that reflects an African, albeit northern African, style of architecture.

Erected in memory of the founder of Klein Windhoek, the grave of John Ludwig is situated in a mausoleum in the middle of a small family cemetery situated in Willemien Street.

As the oldest existing school building in Klein Windhoek, the school, which was opened in 1910, originally consisted of only two rooms and an entrance hall. The building is tucked away behind the Police Station in Sam Nujoma Avenue.

Constructed during 1906–1907, the building was used as a prison until 1963. Built in a fortress-like shape, with an enclosed courtyard, it acts as a reminder of the military and jailing activities of the German colonial era.

Built in the shape of an H, an uncommon style for German colonial architecture in Namibia, this building was erected in 1907 for occupation by 10 unmarried male government officials.

This ensemble of the four remaining buildings of the German colonial period in the inner city bears testimony to the art of one the most important architects of the time, Wilhelm Sander. The buildings were constructed between 1910 and 1928.

On hillsides overlooking the city towards the west are three castles built from local stone as residences at the beginning of the 1900s.

Opposite the military cemetery at the southern end of Robert Mugabe Avenue, the Cross of Sacrifice honours the soldiers lost on both sides during the two World Wars.