The hard work by the folks of AfriCat paid of this week when a rehabilitated cheetah gave birth to three cubs on April 16th in the wild.

This was the first time a rehabilitated cheetah had successfully carried cubs to term, since Okonjima kick started their Cheetah Rehabilitation programme in November 2000.

Staff at the nature reserve did not mince their words or excitement over the historical event. 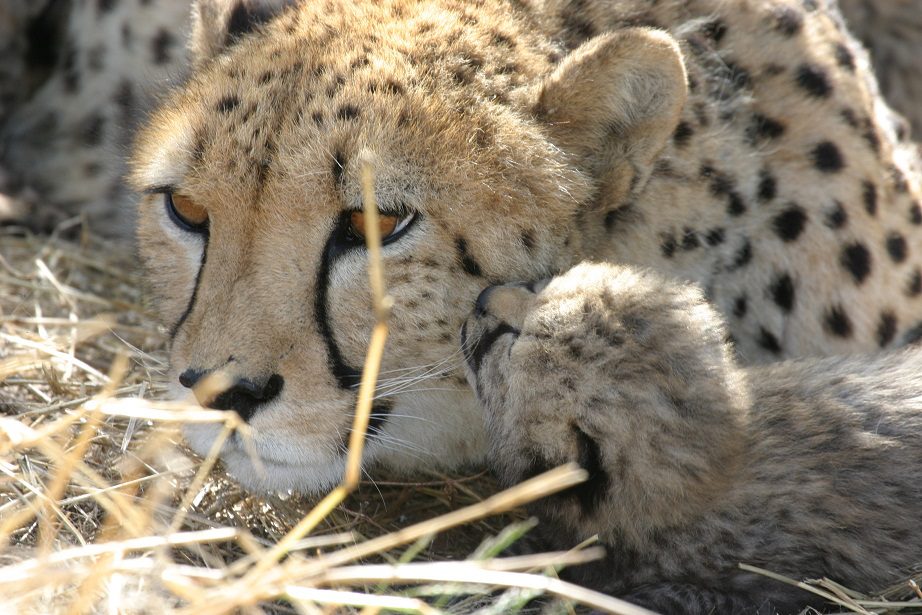 Dizzy with cubs ©Okonjima and AfriCat

“We are not sure how to express the surprise, joy and utter sense of relief after many hours, days, weeks, months and years of hard work – finally paying off!”

New mum “Dizzy” originally came to the AfriCat foundation’s cheetah rehabilitation programme after she was caught trying to survive on her own in the wild at eight months old.

She was taken to the Okonjima Nature Reserve, where AfriCat runs their programme, and introduced to four other orphans of roughly the same age as her.

On June 1 2012, Dizzy was released together with other rehabilitated cheetahs into the 20 000 hectare Okonjima Nature reserve, marking her re-entry into the wild.

From the start, Dizzy demonstrated a keen sense of survival in the wild. Unlike the other cheetahs that were released at the same time, Dizzy adapted rapidly to life in the wild.

She was seen mating with another successfully rehabilitated male cheetah in early January 2013.

AfriCat staff first saw the young cubs on Tuesday, and it could be that they were already born the night before.

AfriCat’s Cheetah Rehabilitation project was initiated to give some of our captive cheetahs an opportunity to return to their natural environment. Although hunting carnivores is instinctive, many of the cheetahs at AfriCat lack experience due to being orphaned or removed from the wild at an early age.

This inexperience, as well as their conditioning to captivity, makes these animals unsuitable for release on farmland. The cheetahs (usually a coalition of brothers and sisters) are fitted with radio-collars before their release into the camp so that their welfare and progress can be closely monitored.

Cheetahs being released ©Okonjima and AfriCat

Once they can prove that they can hunt for themselves and cope on their own, they can be relocated to a private game reserve, where their progress will continue to be monitored. Rehabilitated cheetahs are not released on farmland.

Situated halfway between the capital Windhoek and the Etosha National Park, the 22 000 hectare Okonjima Game Reserve has some of the best accommodation in Namibia, but the highlight has to be the cheetah and leopard safaris.

Namibian safaris are truly wonderful and as The AfriCat Foundation rehabilitates cheetahs, wild dogs hyaenas and leopards, there are opportunities to see these beautiful carnivores in their natural environment.

All photos courtesy of ©Okonjima and AfriCat