Saturday shopping at the Green Market

With a history dating back to the 1950s, Hotel Schweizerhaus was one of the first hotels in Swakopmund.

The history of Hotel Schweizerhaus

Heidi Snyman, who took over management and ownership of the hotel in 1990, explains that it all started with her parents, who came to Namibia from Germany in the 1950s. “They had a vision of starting a small pension with a little café for cakes and pastries. My father, who trained as baker master and confectioner in Germany and then started working in the Putensen Bakery here in Swakopmund, always had a passion for baking specialities.”

Manfred Anton and his newly-wed wife, Wilhelmine, then bought a ‘Swiss- looking house’ (which turned out to be German) five minutes’ walking distance from the beach and started out with a small four-roomed pension. In 1965 the hotel as we known it today received its first guests and a year later Café Anton served its first piece of Black Forest Cake. The Antons have never looked back since.

Hotel Schweizerhaus and Café Anton have been in the family for three generations. “I really enjoy the business,” says Heidi, “even though in the beginning I never would have imagined this. Since I was ten years old, I wanted to become a commercial pilot and I started my career as a ground hostess. But today, this is what I enjoy most.” 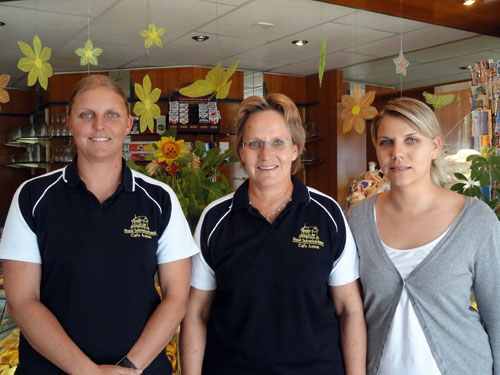 Heidi and her daughters

Heidi studied at the Hotel School in Johannesburg, the same place where her daughter, Silvia, received her training. Both Heidi and Silvia are actively involved in the management of the hotel and recently her youngest daughter, Desirée, also joined the family business. “I still spend my free time up in the air, and flying will forever remain my passion, but this is a different kind of challenge. You need a constant hand and eye on a business such as this one, and in the end it’s highly rewarding.” Most of Heidi’s staff have been part of the hotel and café for between 10 and 20 years. “We are like one big happy family and this is how I wish to keep it.”

One of the most important highlights in this history of confectionary paired with accommodation is without a doubt the ripple effect Manfred’s training had on others. Manfred trained his daughter Heidi’s late husband André as a confectioner, who in turned trained an Oshiwambo man, Junius Wilpard. Junius, who is now the main confectioner at Café Anton, still bakes the cakes according to Manfred’s original German recipes. Interestingly enough, Junius couldn’t read or write when he first started out and had to memorise ingredients. Today he knows all the recipes off by heart.

Then there’s also the story of Charly Biess (see below). The tradition of this intrinsically Namibian institution lives on.

If you want to experience sleeping in one of the first hotels in the coastal town of Swakopmund, be right on the Mole and literally around the corner from the shopping area, then Hotel Schweizerhaus is the place to be. The hotel was also one of the first establishments to build en-suite rooms, in as far back as 1966. Moreover, Café Anton is the most renowned confectionary in Swakopmund.

“In any business there are daily challenges to overcome. You need a hands-on approach, to be actively involved in the day-to-day operations, tackle challenges as they come, and solve problems as they arise,” says Heidi.

What is your favourite destination in Namibia, and why?

“Definitely Etosha National Park! I love watching the animals go about their daily routines. I can watch them for hours on end and never become bored. This is my ultimate means of relaxation.”

The story of Charly’s Bakery

Cape Town’s Charly’s Bakery is world-renowned (they even made a Norwegian woman move her wedding to South Africa to have a Charly’s Bakery wedding cake). And the story of Charly’s has its origin at Café Anton.

“It all began with Charly Biess, a 16-year-old boy looking for work in a small desert town called Swakopmund.

He swept the floor and made puff pastry, and washed dishes day in and day out under the stern guidance of the German Master Baker (Manfred Anton), until he was allowed to learn how to bake the cakes: classics like Black Forest and Sacher torte.”

Having mastered the tricks of the trade, Charly and his family relocated to Cape Town some years later and first opened shop in Thibault Square, making food to German perfection. They then moved on to the V&A Waterfront, where they became famous for ‘those quiches’ and ‘those cakes’ that had people queuing up for hours over long weekends and holidays.

With fame and expansion came the Charly’s Bakery of today, situated in Canterbury Street, Cape Town, boasting a range of cake-loving clientele from all corners of the globe. “The German perfection and standard? Well, look around, it’s still here. The girls have joined us. The colours are now brighter, so is the future. The cakes are sexier, so are the woman,” smiles Charly’s better half, Jacqui, ‘the woman with the long dark hair and the helluva cleavage’.

“So this is the story of Charly’s… in an almond shell.” And this massive success story all started under the guidance of Master Anton…

Charly has enjoyed fame on SABC3 and the Food Network (DStv channel 175) as a reality show called Charly’s Cake Angels, featuring Jacqui and her cake-baking daughters. Season two of the show was launched on the Food Network in September.