Facts on the caves of Namibia

As I walk among the burnt sienna rock slabs at Twyfelfontein, contemplating the meaning of the hunter-gatherer engravings etched so many thousands of years ago, my guide answers my roving thoughts with a philosophical “Only our ancestors know.”

H e explains that in all African traditions, a spirit medium or shaman speaks to the ancestors on behalf of the people, and then conveys the information and advice received from the spirit world back to them. As I look around the vast rock arena, I gain a new understanding of the repetition of certain animal engravings such as the giraffe, symbolic of rain – its elongated neck reaching into the heavens – and the ostrich, representing food. The area transforms from an art gallery and education facility of the ancients into a cathedral of prayer and communication with the spirit world for water, protection and food.

Namibia is dotted with mysteries of old, from ancient engravings and wrecks of ships that came to grief in the treacherous waters off the Skeleton Coast, to the wild horses of the Namib and the endemic dual-leaved welwitschia plants.

Traveling through the desert requires forethought and preparation, and stories of those not suitably equipped to traverse its territory filter through time, telling of the unfortunates who attempted to cross the ephemeral rivers as they rushed down in flash floods and those who have disappeared without a trace in the depths of the Fish River Canyon. The intrigue of a vast, sparsely populated country where you can drive all day on gravel roads barely seeing another vehicle, invites the imagination out to play.

Desert-adapted elephants were once thought to be a subspecies of the African elephant, but it is now understood that the hardy pachyderms are a separate population of the same species that have adapted to surviving in a harsher environment. They travel the sandy ephemeral watercourses in the north-western region of Namibia, digging for underground water and feeding off the riparian vegetation. Unlike their more fortunate brothers in fertile areas, they have acclimatised to their precarious existence and are gentler with their surroundings. The largest terrestrial mammal on Earth has adapted to the terrain and desert conditions with amazing ingenuity and tenacity. 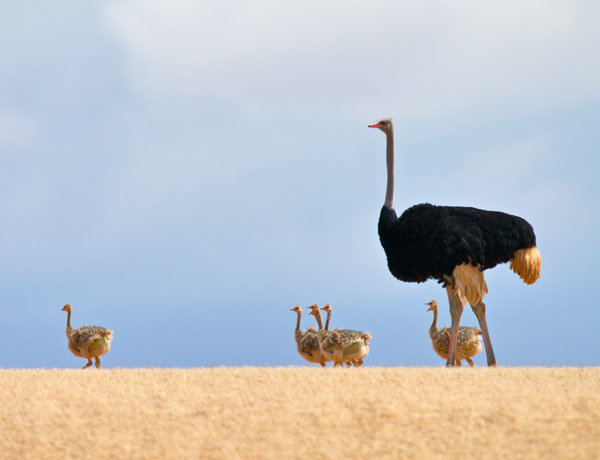 Another mysterious animal, Diceros bicornis, the free-roaming black rhinoceros – once nearly poached to extinction for the value placed on its horn – roams the arid Kunene Region. One of its favourite plant foods is the rod-shaped euphorbia bush, Euphorbia damarana, common to the area and deadly to human beings. This animal’s digestive system is as hardy as the rest of its 800-1400 kilogram bulk.

In many areas the so-called fairy circles mark the landscape in a polka-dot display. They are barren circular patches of sand surrounded by grass, their origins as yet unexplained. Theories – ranging from wacky and fanciful to speculative and creative – include that they are areas of past termite activity; patches where poisonous euphorbia plants once grew; fungal mycelia; were caused by extraterrestrial visitations or electromagnetic radiation, to circles where fairies dance on moonlit nights.

The first European seafarers to reach Namibia’s desolate shore were Portuguese explorers, who erected a padrão (stone cross) at Cabo do Padrão, now known as Cape Cross, in the 15th century. Diogo Cão led his small fleet of caravels down the West African coastline, reaching Namibia on his second journey in 1486. Once the cross was erected, Diogo disappears from recorded history. He is believed to have died on a mountain south-east of Cape Cross. The cause of death and his whereabouts remain a mystery, the documents relating to this expedition thought to have been lost in a fire. His fleet returned home without him.

The Namib Desert, considered the oldest desert in the world, harbours a vast array of plant and animal life. The remarkable flora and fauna have adapted in various ways to survive in the harsh conditions, dependent on the fine mist that sweeps in from the Atlantic Ocean.

The plant life is awe-inspiring. Lichens cling to rocky surfaces, rehydrating and transforming when touched with moisture, and welwitschia plants depend on very specific conditions, including 25 millimeters of rainfall – never a given in a desert – for germination.

The Welwitschia mirabilis is a botanical wonder considered by scientists to be an ancient link between cone-bearing plants or gymnosperms and flowering plants, angiosperms, as it has cones as well as features characteristic of flowering plants. It is thought to be related to prehistoric flora known only through fossil records. The resilient plants live for hundreds of years, their two leaves, shredded by the wind and weather, lying on hot, stony ground, their orange cones brightening their surroundings. They were named after Austrian botanist Friedrich Welwitsch, the Latin word mirabilis meaning wonderful or miraculous. 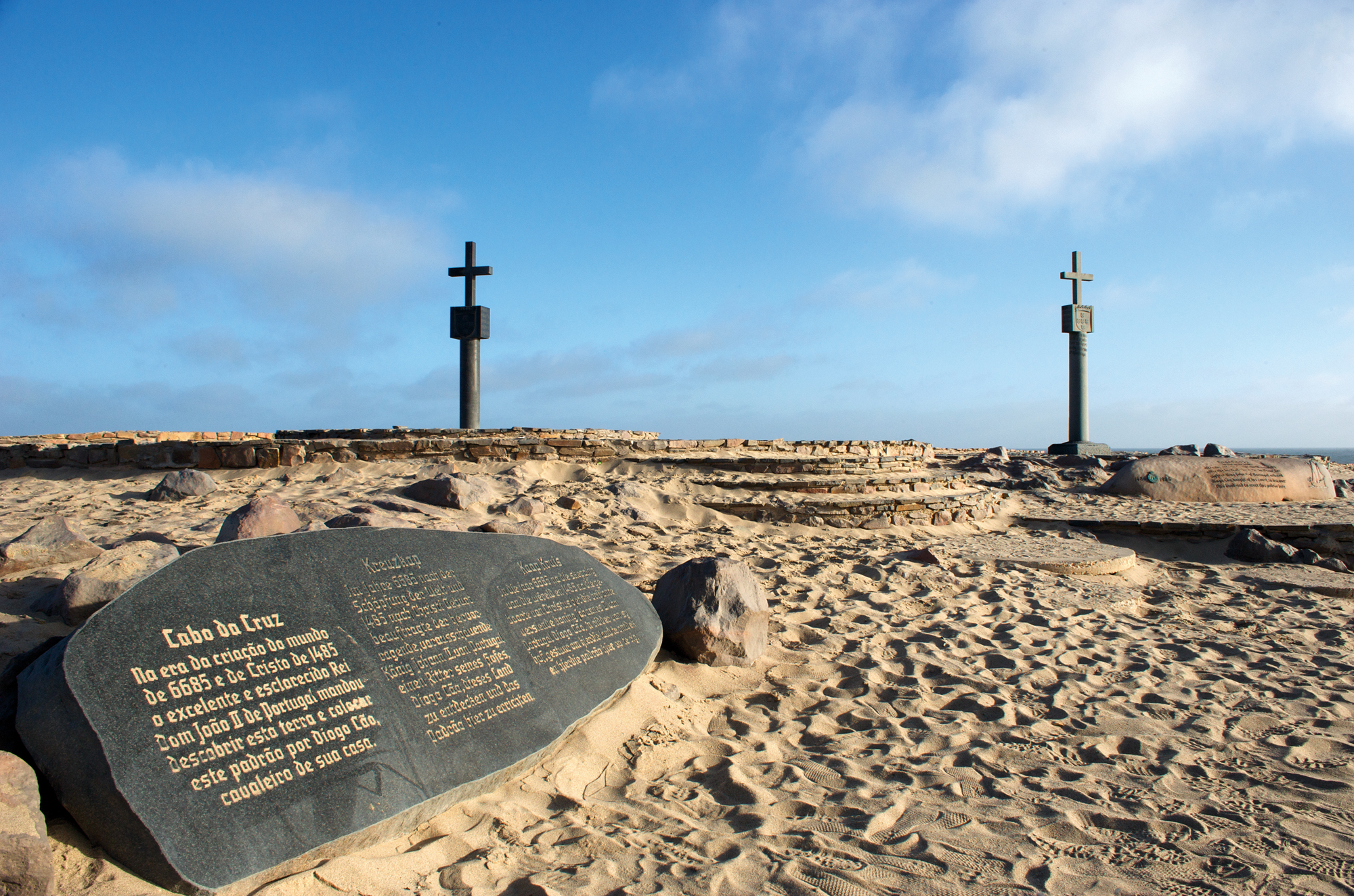 Fairy circles are barren circular patches of sand surrounded by grass, their origins as yet unexplained. Photo ©Paul van Schalkwyk

Survival techniques of the small creatures of the dunes include burying themselves in the sand in the searing daytime heat and emerging in the cooler hours, raising feet off the sand in a thermo-regulatory dance or like the fog-basking beetle positioning its body to catch mist droplets that condense on its carapace and drip down into its mouth.

The wild horses of the Namib ignite the imagination , the first records of their existence appearing in the 1920s. Theories of their origin range from their being domestic stock that survived a shipwreck south of the Orange River to animals that escaped from Duwisib Castle when its owner was killed in war. The most likely theories, however, are that they are descendants of the horses that scattered when German troops bombed a Union of South Africa base at Garub in 1915, or of abandoned horses from the nearby Kubub stud farm that were owned by the mayor of Lüderitz, Emil Kreplin. The horse population has ranged between 50 and 280 horses in the 95 years of their existence, with 200 counted in 2010. Their survival over the years was due to their home area, the Sperrgebiet, being a restricted diamond area and the water troughs maintained by the conservation authorities at Garub, 20 kilometers west of Aus. They now reside within the Namib-Naukluft Park.

We continue to discuss the Namibian mysteries as we view the Twyfelfontein engravings, lion-man reaching to the heavens with a human hand on the end of its tail, and the many animal messages o the gods. As ancient prayers and mysteries merge, circle and float up into the blue sky and we stroll back to the entrance, my guide turns to me, succinctly summing up the mysterious country. “There are some things that even rocket scientists can’t explain,” he says. “That’s what we like about Namibia.”

The Welwitschia mirabilis is a botanical wonder considered by scientists to be related to prehistoric flora known only through fossil records. Photo ©Paul van Schalkwyk

The wild horses of the Namib ignite the imagination, the first records of their existence appearing in the 1920s. Photo ©Paul van Schalkwyk

This article was first published in the Flamingo November 2011 issue.