Several water points in Etosha National Park were upgraded during the past four months. Thanks to the upgrade, the waterholes for wildlife will remain full during the dry season.

The upgrade not only benefited the wildlife but also the tourists who are able to rely on wildlife being present at full water holes. This enhances the attractiveness of the park, increases income from tourism and preserves Etosha’s biodiversity.

On Friday July 5th 2013, Boas Erckie, Deputy Director of the Ministry of Environment and Tourism and German Ambassador Onno Hückmann inaugurated all water points in the  Western parts of Etosha and bordering conservancies as part of  the German Namibian Cooperation Program.

The German Government through the Deutsche Gesellschaft für Internationale Zusammenarbeit (GIZ) supported the upgrading of water points in Etosha National Park and neighbouring conservancies.  This upgrade comprises of the installation of solar panels, solar driven pumps, storage tanks, new pipelines and fittings and the construction of elephant-proof walls and troughs. 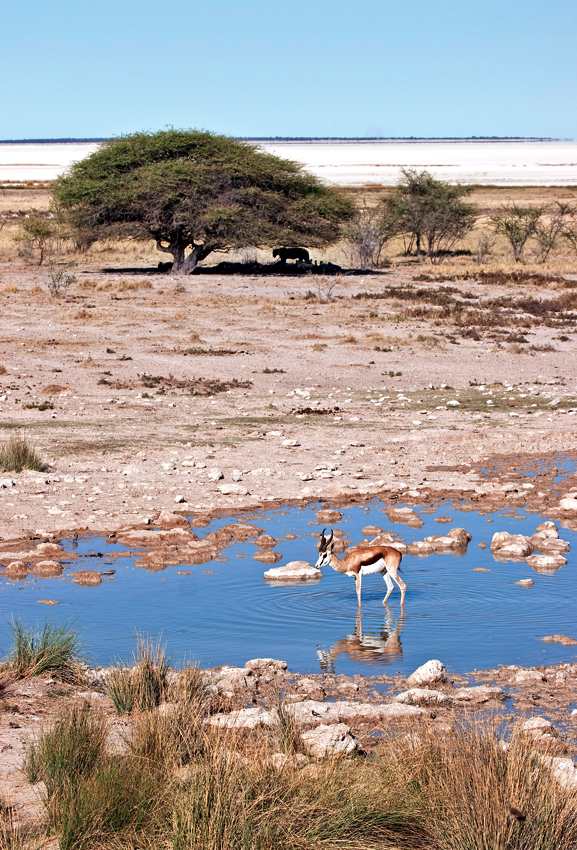 While the boreholes already existed, the infrastructure surrounding them was deteriorated and not supplying sufficient water, especially during time of high water demand by the  wildlife.

The entire project was conducted by MET and GIZ in less than 4 months and at a cost of approximately N$ 2.3 million.

The present amount of water provided by the different water points varies with demand but ranges at a maximum of  56 m3 per day. Every water point is  equipped with storage facilities.

The entire equipment is protected against damage from elephants by means of walls and stones. They  are  constructed in a way that the scenery is kept as natural as possible.