The phenomenal Himba – a joy to photograph

Skyscrapers of the north – Makalani palms

Hentie Burger, a Namibian orthodontist who lives in Windhoek, has been involved in African wildlife photography since 1978. He spends two to three months each year in game parks and reserves in southern and eastern Africa. His work has been published in many magazines and calendars and exhibited in the London Contemporary Art Gallery. He was invited as guest speaker to the 40th Australian Photographic Congress in 2002 and had a solo exhibition in Germany during the same year.

B arren. Deserted. From all over the world people flock to Namibia to, well, not see people. The idea of a country about three times the size of England with a population of under two million is simply mind- boggling.

And yet, there are some natural inhabitants in Namibia who are as beautiful and mesmerising as the landscape.

In the far north-western corner of Namibia live the nomadic cattle herding Himba tribes. While their traditional lifestyles are interesting enough, it is their complicated hairstyles, jewellery and red-tainted butterfat make-up smeared all over their bodies that are the most fascinating.

Understandably the first thing visitors and especially photographers want to do when they see Himbas is reach for their cameras. What is less understandable is how some people simply assume it is all right to waltz into the villages and huts of the Himba people and click away merrily without so much as a how do you do. The thought that these are the homes of people who would appreciate being introduced doesn’t seem to occur to them, let alone asking their permission to photograph them.

Fortunately there are photographers like Hentie and Hilda-Marie Burger who not only understand the etiquette involved when photographing traditional people, but who also make an effort to share their knowledge and experience of their work at exhibitions and at photographic conferences around the world.

The ondikwa, a traditional baby sling, is considered a sacred object representing life and fertility. This particular one is exceptionally decorative, and is used for special occasions. The ondikwa is passed on from mother to daughter.

A young Himba child of about seven years, wearing an omatupa, a necklace made of bones.

Himba women wear an assortment of necklaces, belts and straps that collectively, when dressed up for an important event or ceremony, weigh around 12 kg. Made from leather, iron beads and other decorations and packed with otjize (a mix of ochre and butter fat), the ondengura is worn on the back of the neck. 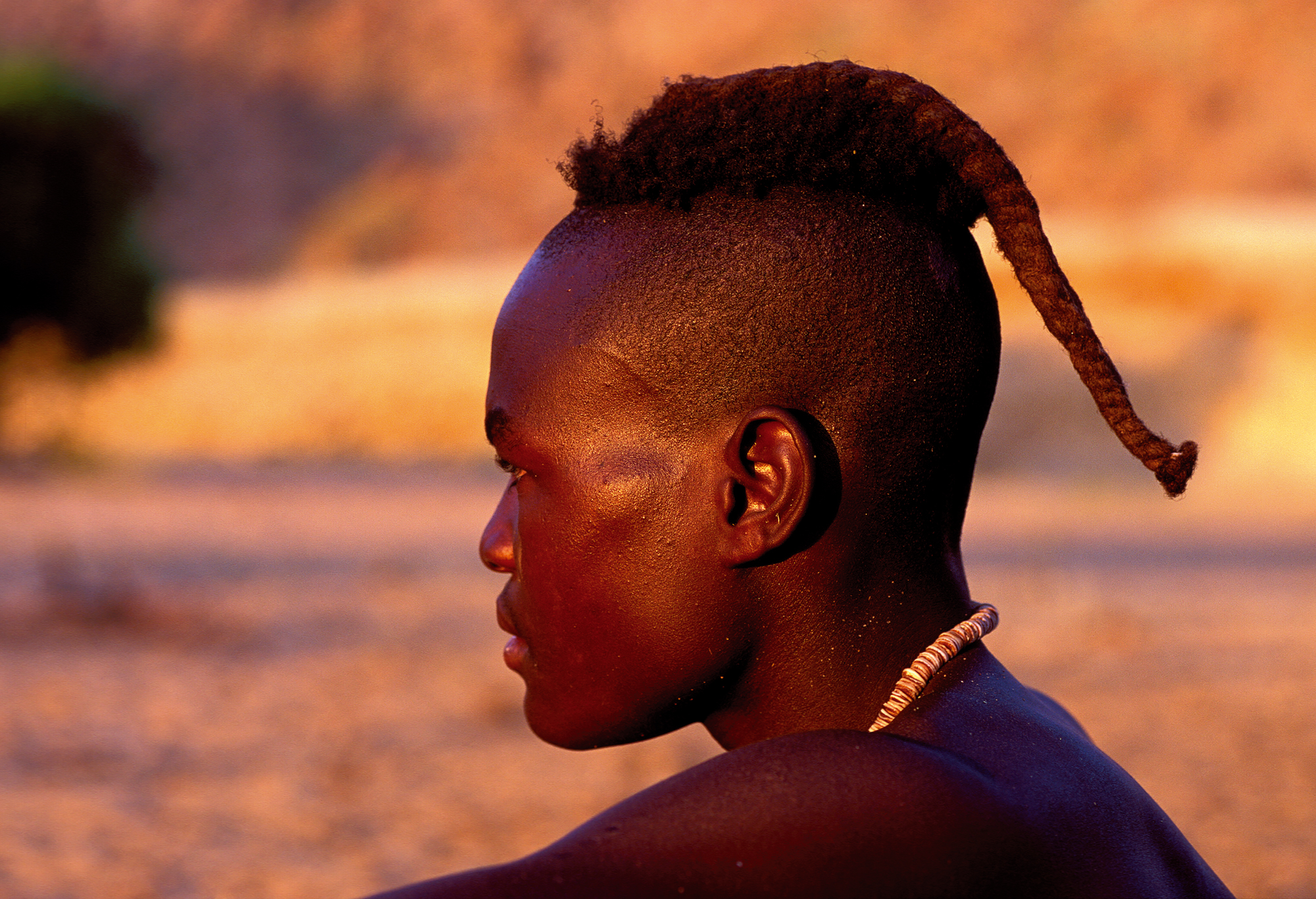 Young boys have smoothly shaven heads, except for a pigtail plaited over the crown. Once they become ondatus, young men of marriageable age, the plait is split into two.

During the age of puberty, a Himba girl’s hair is plaited forward to mask her face from lurking young men.

The best word to describe Hentie and Hilda-Marie’s approach to a photographic session of the Himba people is “professional”. Arrangements are made weeks before the time. First of all, they study their subject, reading literature and interviewing experts to gain as much insight into the traditional Himba people and their culture as possible. Then an appropriate guide is selected. This, Hentie will tell you, is extremely important. The right guide will already have established a good relationship with the community and will act as translator, interpreter and host. A guide who understands the language and culture of the Himba acts as a trusted and respected go-between. This person also negotiates the matter of payment.

In the Burger’s case, they worked with Koos Verwey, a Herero-speaking “white Himba” who has been initiated into the tribe by the Himbas, after having lived in the area for many years. For this specific shoot, remuneration was fixed per half-day session, paid in maize meal, tobacco, hair extensions, salt, fresh water and some cash. The fresh water (a much appreciated gift, seeing the Himba have to dig for or carry fresh water to their villages from miles away) and produce had to be transported from Windhoek by truck.

After doing your homework, finding a guide and negotiating a fee for the photographic shoot, the next most important thing, according to Hentie, is to allow enough time. The photographer and the Himba people need to feel comfortable and relaxed enough for the photographs to look natural. To them this means spending at least a week on the site.

By the time they arrived, the Burger’s had already spent several days contemplating potential shots, experimenting with different light filters and angles, even building a hut in their garage to make sure they had thought of everything they might need. Hilda-Marie, for instance, would need a ladder to take shots of the taller men from the right angle. One of the Burgers’ black employees was excused from his day job to pose, complete with some of Hilda-Marie’s jewellery, for the photographers to experiment with different light exposures. For some jewellery they used white, silver and gold reflectors instead of the more extreme flash. They did their best to determine the optimal method for photographing the red-black Himba skins, gleaming with pigmented fat, before the time.

Once on location, the guide introduces Hentie to the tribe. The cameras are not taken out before these formalities are concluded and permission has been granted. Only now does Hentie start the shoot. After every half-day shoot, all actions are carefully documented and the relevant information recorded.

At the end of the project, Hentie and Hilda-Marie go home with a successful product and a memorable experience, leaving the Himba to continue their unique lives, having earned themselves good money without compromising their privacy or traditions.

A group of girls of different ages wearing hairstyles that indicate the specific stage of life they are in. Hairstyles are redone about every six months or on special occasions and ceremonies of significance.

A father presents a leather triangle, worn around the ankle, to his favourite daughter. Such ‘favouritism’ is usually based on the particular daughter being the most hardworking in the family.

In the front, worn between the bare breasts, is a large magnificent single white shell, a symbol of fertility. When a wife dies, the front part of this shell is cut off ad cherished by the husband as a keepsake.

Married men indicate their marital status by wearing turbans of softened sheepskin. Their long hair is set into a rest. Ash, pieces of bark and sticks are used to fold the hair into the required shape, which is anointed with aromatic herbs and plants before covering it with the leather cloth.

Widows mourning for their husbands remove the leather erembe, the headdress indicative of a married woman, fixed on top of her elaborate hairstyle of otjize-smeared plaits.

In the event of a man’s wife dying, he will undo his hair and wear it uncovered for a year to indicate he is mourning.

Once they have been initiated as ‘women’, girls trade their lambskin aprons for sheep or goatskin skirts. This young girl’s hairstyle is still the one worn during puberty, but the skin dress and additional beaded strings around her waist indicate that she has been given the rite of passage to adulthood.