Raising the profile of Namibia’s parks

Dunedin Star – shipwrecked on the coast of hell

It’s been a long, lonely, lovely and seriously dusty drive through northern Namibia and the Namib Desert when we finally reach the guard post and gate of the Skeleton Coast Park. A Ministry of Environment and Tourism (MET) ranger emerges looking rather bored, and we join him in the office to pay entry fees and do the paperwork. Before he can find his pen (or we ours) we give him a kilo of Sandpaper magazines.

He has a look at the stack of magazines, gives us a dazzling smile, and leaves us to admire the office. We kick our heels for a minute or two, thinking it needs more magazines, and then the crowd arrives! OK. Five people, and then two kids. But in the Skeleton Coast, that’s about as big as a crowd gets!

They inspect the magazines and start riffling through the pages. One guy gives a delighted snort and jabs a finger at a picture of an MET ranger. My Damara is not that slick, but I’d guess what he said next was something along the lines of “Look at that! It’s me!” Or maybe he said “Hendrik’s in Etosha! Look at him! What’s he done to his hair?”

Everybody’s busy with the Sandpapers now. Even the six kids – where did the other four come from? Then somebody spots somebody else who they know. The rather dormant office is now bright with smiles, grumbles – “Where am I in this magazine?” – and general chit-chat.

As soon as our park visitor’s paperwork is done we’ll be off and away. But the Sandpaper work will continue long after we’ve left. There’s not always much else to read in this neck of the desert. But there’s plenty to read in Sandpaper!

We dropped off the Sandpaper copies at the Skeleton Coast and yes, people liked them. But while we were doing it, other people were distributing copies too. My friend Billy was spreading them around in the south; his trucker buddies were dropping them off en route to the Caprivi; tour guides were handing them out as in-bus entertainment; the Klein Windhoek Guesthouse was putting copies in every room… And these guys weren’t MET, and weren’t being paid to do this. A whole lot of Namibians were distributing the Sandpaper magazine because they wanted to.

So how did this bush telegraph thing start?

The SPAN project promoted the principle that communication about conservation was almost as important as conservation itself. There are many proud, brave and committed people working to conserve Namibia’s natural and national heritage, but if nobody knows about them or what they’re doing, it goes unnoticed. It is also not motivational for those who are in the remote bush getting their hands dirty for conservation. And park staff members don’t always know what fellow MET staffers in other parks are doing.

The Sandpaper magazine was a SPAN idea devised to spread information and bring people together. It started with lots of enthusiasm and discussion about its title. The concept emerged while we were driving in the thick sands in Khaudum. Sand? A paper? How about ‘Sandpaper’? Happily everything worked out, as in: ‘Sandpaper; smoothing the way forward for protected area management in Namibia’.

Namibia is bulging with talented photographers, writers and designers. Contributions came in, left, right and centre. Suzi Seha reworked the Protected Area (PA) maps, making them colourful, loving and fun. Scientists, well you know what they’re like! They contributed scientific articles. Good ones! The magazine profiled people – the Namibian people in the front line of conservation who do the work on foot or on horseback – and bingo! A conservation magazine emerged with teeth, opinion, news, wit, lots of people and wildlife and guaranteed to elicit a smile. It also scooped an eco-media award from the Hospitality Association of Namibia in 2009.

The French have a saying that the first bite of a meal is taken with the eyes. The Sandpaper covers confirm this premise. They were consistently appetising! I have them all next to me as I write. At the top of the pile is an image shot by Tony Heald of two zebras looking playful. Closer inspection, however, indicates that the male is, in fact, killing the youngster. Next comes a chameleon caught for posterity through Tony Heald’s camera. Grumpy looking critter! Totally loveable! Then there’s an extraordinary ground’s-eye view of an elephant herd photographed by Hans Rack from a remote-controlled mobile camera disguised as a rock. And something very puzzling. Surreal. Took me a minute or two (or five) to realise it was a picture of a tok-tokkie beetle leaving tracks in the sand, taken by Peter Tarr.

Which brings me to the soup! SPAN decided to augment the written word with the spoken word, and Park Talks were initiated. These were held at the Franco-Namibian Cultural Centre and involved talks and discussions that covered all manner of conservation issues, such as ‘Do Parks Need Condoms?’ – that one was about HIV/AIDS and its prevention – and ‘Parks and Namibian Crafts; Opportunities for smart partnerships for poverty alleviation’. And so on. 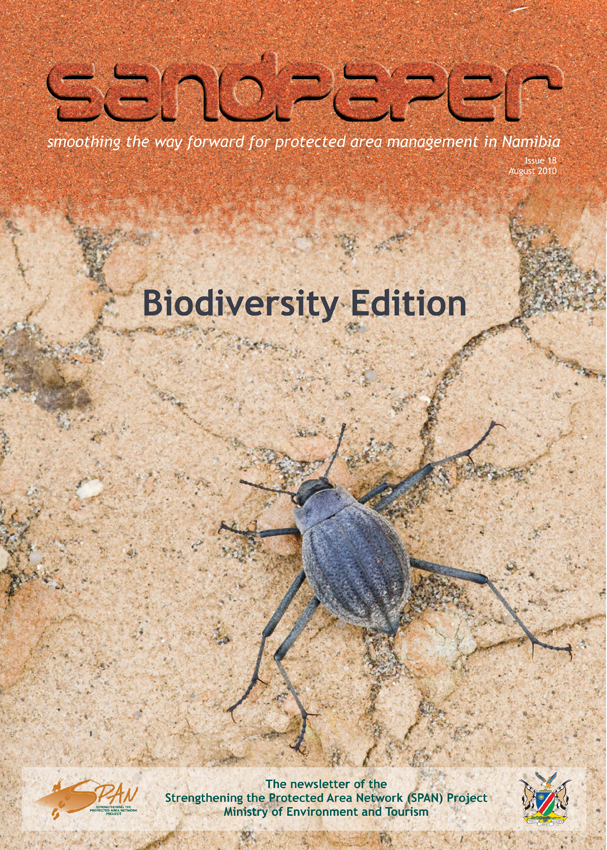 The talks were well attended and invariably developed into stimulating debates. What was special about the Park Talks in particular was the amiable and human contact. Nick de Voss, noticing that winter temperatures were brisk, organised his family to make hot vegetable soup to revive participants on their departure from the Park Talks auditorium.

The feeling of mutual interest, companionship, and shared goals was as heartwarming as the reception Sandpaper received on the Skeleton Coast! And the soup! Yes, that hit the spot!

Hugh Paxton signing off. Enough of my blather! Over to Rosalia!

Thanks Hugh, I wondered when you’d belt up and give me a chance!

SPAN’s efforts towards raising the profile of the protected areas in society went far beyond the Sandpaper magazine and Park Talks. Namibia’s media are always interested in news, and we kept them well fed with press releases. There were several important events – the Etosha centenary celebration in 2007; the historic opening of the Sendelingsdrift tourist access facility with a pontoon over the Orange River; the reopening of Mata-Mata Gate ushering in a great transfrontier protected area shared by South Africa and Namibia; the proclamation of the Tsau//Khaeb (Sperrgebiet) National Park in 2008, soon to be amalgamated with the Namib-Naukluft, Dorob and Skeleton Coast parks as the Namib-Skeleton Coast National Park, set to be the largest park in Africa and the eighth-largest in the world; and the signing of an inter-governmental MoU (Memorandum of Understanding) for the establishment of the Kavango Zambezi Transfrontier Park (KaZa) in 2006. In only a few years, great changes occurred in our country and it was essential to inform people about them and to celebrate them.

Press conferences were held, a website was revitalised, and – as part of a branding reboot – every national park was given its own booklet plus supporting fact sheets designed to answer questions and raise awareness. And make a visit to these precious places more fun!

SPAN achieved many things, and got the message out. It significantly raised the profiles of Namibia’s parks and their indispensable conservation, economic and social roles in Namibian society. And the message spread far and wide! It has been recognised as one of the most successful Global Environment Facility (GEF) projects in the world, and was showcased at a number of international meetings, including the Rio+20 Summit in Brazil in June 2012. The project also features in the GEF Book of Achievements since the first Rio Summit 20 years ago, thanks to all who played a significant role in ensuring that this was not just a dream, but a reality born of hard work, determination and communication.