Local is lekker in Omaruru

The land of space and soul – and a big blue sky that reaches to eternity – is also the place to stretch the imagination and embrace a more colourful, richer world. Off the beaten track, a bit of exploration – and imagination – often reveals intriguing phenomena that are not widely known. And, although it’s hard to beat towering sand dunes and the sculptural mastery of the second largest canyon in the world, there are many enchanting and delightful jewels to be found along the way. 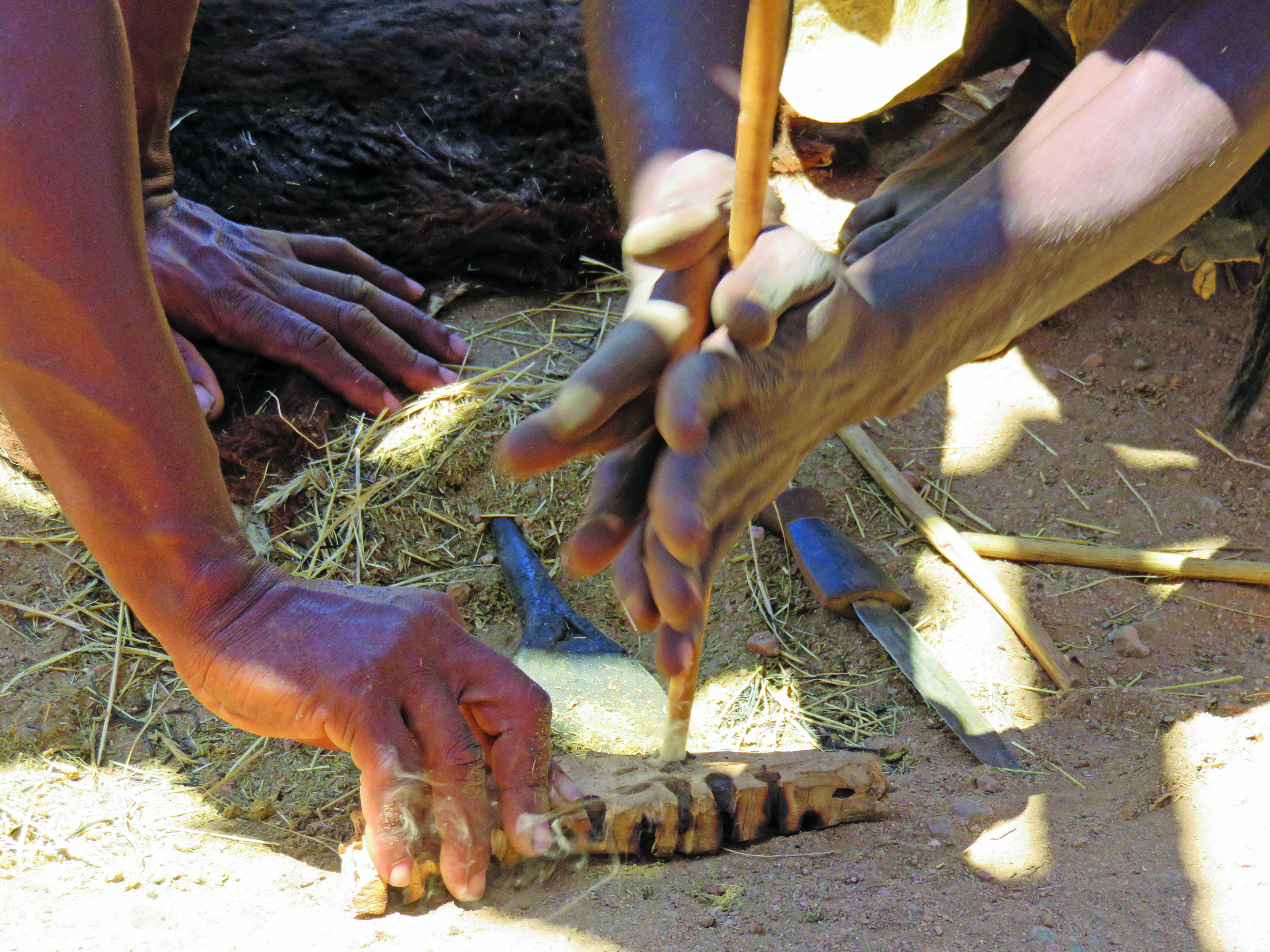 Making fire the traditional way at the Damara Living Museum near Twyfelfontein.

Stone-sellers displaying their colourful wares on the coastal road south of Henties Bay. The wreck of Zeila, a trawler stranded in 2008, lies in the surf behind them.

The Hoba meteorite, consisting of 82% iron, is the largest known meteorite in the world.

Here they are! Twyfelfontein’s rock engravings – shaman’s prayers to the gods. 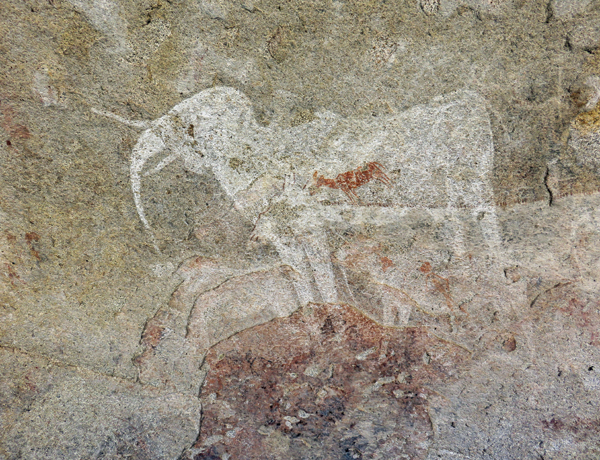 The White Elephant at Phillip’s Cave near Usakos.

Secrets always take time to be revealed. I discovered some beauties on an anti-clockwise loop from Windhoek to Otjiwarongo and Khorixas (with a short detour en route), and via the coast down to Swakopmund and Usakos. On the journey I would be enthralled by Herero women in voluminous dresses at the Ugab River, I would learn the secret of making fire with sticks at the living museum near Twyfelfontein and I would be dazzled by the gemstone collections in Damaraland.

The adventure included some of the great Namibian locations, but also some of the smaller, wackier spots, which caught my attention and roused my imagination in a flurry of wonder and inspiration.

TO THE OMATAKOS & BEYOND
It didn’t take much. Conical termite hills dotted the landscape, reaching heavenwards in spindly spires, warthogs rooted on road verges hurrying into the bush with tails alert like radio antennae and a clear blue sky reached to eternity. My first landmarks were the Omatakos, the two mountains that emerge from the plains on the way to Otjiwarongo and Waterberg, named for their resemblance to a woman’s behind.

Veering off from the bodacious beauties, it was time for the gravel and I made my way to the Otjihaenamaparero guest farm to walk in the paths of dinosaurs. The farm’s Herero name – which sounds like a running brook – suggests that ‘it’s a big, big, place without an end’. I took it as a subtle (or not so subtle) hint to extend the parameters of my imagination and go back 219 million years to the days when these prehistoric beasts loped over the land. I followed the signs to the Dinosaur Tracks and hooted outside the farm gate, as the sign instructed. The German-speaking owner came out with a wad of flyers and a register and began to tell me about the two tracks visible in the rock from the Ceratosauria and Syntarsus species. “Ceratosaurs were large, bipedal predatory dinosaurs that roamed the southern hemisphere in the Late Jurassic period.” I interrupted him, breaking the magic to fetch my pen from the car, and he dismissed me, telling me to Google it when I got home. But then, unable to keep this incredible information to himself, he called me back, waving a folder in his hands and showing me a picture of a massive dinosaur with long, pointed teeth. “Scary, hey?” he said. “Pretty frightening,” I replied before turning towards the campsite and the rocky area where the three-toed dinosaur tracks are etched into stone. I followed the tracks and for a few fleeting seconds, as I walked in the blazing heat over the Etjo sandstone, I could sense the great beasts leaping about.

Leaving the peace of the farm roads, I made a quick north-easterly dash and detoured to Grootfontein. After all, I had an appointment with a star! The Hoba meteorite (the largest known single meteorite) entered the Earth’s atmosphere and crashed to the ground 80 000 years ago. In 1920 a farmer discovered the 60-ton rock while ploughing his fields. It was unearthed and identified. This was an opportunity I couldn’t miss. I ducked at the sign that said ‘Beware of falling meteorites’ and climbed onto the large chunk of metallic rock to imagine what it felt like to ride a shooting star through the galaxy. Wahoooooooo!

I had after all walked in the paths of dinosaurs, met white elephants and… I had even sat upon a shooting star.

ROCK PRAYERS & WHITE GOLD
There were soon more tales of intrigue and wonder to be found, and another appeared at the popular Twyfelfontein rock engravings. This was the place where hunter-gatherers of old congregated during dry seasons, engraving their messages into stone. It’s also the place where half a century ago farmer David Levin chose to settle, battling to make a livelihood, never certain if there would be sufficient water for his family and livestock. In early days, whenever neighbouring farmers dropped in, his wife would tell them, “he’s at the spring,” and they’d find him there digging and wondering. This led to his nickname ‘David Twyfelfontein’ (David ‘Doubtful Spring’).

When it came time to register the name of the farm, the name had stuck. It was here, in the earthy cathedral, that I stretched my imagination to conceive of the 2000-6000 year old petroglyphs as prayers to the gods, chiselled into the rock by shamans as they entered trance, beseeching the gods for rain, food and protection for the hunt. Elongated giraffe necks and mythical creatures, half-animal, half-human, intimated the merging of worlds.

My imagination continued to soar as I drove along the coastal road. I was once again fascinated by Cape Cross (formerly a bustling settlement established to exploit ‘white gold’ – guano), which boasted the first piece of railway in the country and lays claim to the first highway robbery. Further south, salt crystals were displayed on rustic tables along the roadside and the lichen fields revealed the amazing tenacity of living organisms to survive in the desert extremes.

DREAMING OF AN AGE OF INNOCENCE
When I arrived in Swakopmund, a town that always gives me the impression that it was dropped unexpectedly from the heavens, I strolled along the jetty at sunset, watching flamingos fly homeward for the night. Here, I pictured how people were once lifted in baskets from their ships and the menacing breakers below. The history of a town built between desert and icy ocean continued to baffle me.

I had one more quest before I returned to the capital, and that was to find a white elephant. I eventually found her on the Ameib guestfarm near Usakos where I braved the 40 degree heat to walk to the cave.  Halfway, a sign informed me to ‘Hou moed’ (keep your courage up). When I had paid my respects to the elephant rock painting, I sat down in the vast cave, once the spacious home of San (Bushmen), and as I looked at the spectacular landscape I envisaged a time when the Earth was young.

There was still so much to explore and discover, and I was reluctant to return to the main road and the city. The tip of the fantastic iceberg had barely been touched. But, those adventures and their telling are for another time. For now I had to be content. I had after all walked in the paths of dinosaurs, met white elephants and… I had even sat upon a shooting star.

Dinosaur tracks etched into the sandstone at the Otjihaenamaparero guest farm.