World Giraffe Day – Stand up for the Giraffe

Images of an ancient wonderland

The Skeleton Coast of Namibia is truly a region of contrasting, beautiful landscapes. Having the opportunity to leave a footprint where there has been no human life for hundreds of years and learn about the history of centuries-old rock formations, galaxies far-far away and desert-adapted animals is an opportunity not many experience in their lifetimes.

“When the aircraft took off from Windhoek early on a clear morning and headed straight for the Kuiseb Canyon and adjoining red dunes, I didn’t have a clue what to expect,” says Gill. They flew past dry, desert landscapes and moved coastward, where schools of dolphins and a number of sharks were spotted. Guano islands that used to be depots for ‘white gold’; the fishing waters of Swakopmund and Henties Bay, where large numbers of carp and mackerel are pulled out every year; and Wlotskasbaken, the town without a municipality, were all passed by at a speed of about 120 knots per hour, while Bertus Schoeman, the guide and pilot, enthused about the history of Namibia’s magnificent coastline.

For a traveller, seeing as much of a country in the shortest time available is usually the norm, especially in this day and age, where time is money. Being a first-timer to Namibia, Gill had no idea where to start, what to see or where to go. “In the end, I chose to come on this safari, firstly because I would see so much more of the country than I would’ve if I were driving myself and secondly, because it explores parts of the country that are mostly off-limits to others.”

Gill wasn’t disappointed in any way. “Bertus knows so much about his country. He knows the rocks, the plants, the animals, the history, the important facts and even some of the unimportant ones. I was blown away by the combination of his knowledge and the picturesque view I had within my hand’s reach every second of my journey. It was like a great story that only a selected few are privileged enough to hear. I was truly blessed with this experience.” 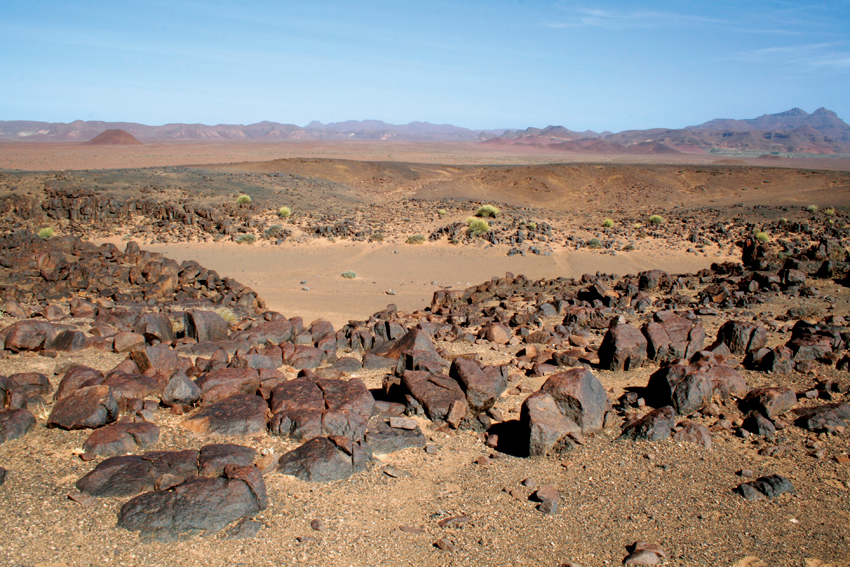 On the first day of this four-day safari, the aircraft took Gill along the coastline, past the Brandberg – named after the way it ‘catches fire’ with the last rays of the sun – to the Ugab formations. “It was by far the most deserted landscape I’ve ever seen,” commented Gill. “The earth is scorched black with no form of life for as far as the eye can see. It amazed me how there were still a couple of flies hanging about lazily, as there were not even a dried-out piece of dung for them to sit on!” But apart from its lifelessness and the dead silence, the area is rich with history of ancient layers of sand and mud pushed up by the earth’s tectonic plates, which formed the most amazing mountain ranges.

“It is one of the oldest landscapes in the world. All that’s left are these magnificent rock formations,” added Bertus.

After some exploration on foot and in the Land Rover, the day came to an end with a homemade chicken curry at Kuidas Camp – surrounded by a barren, Mars-like landscape with rock paintings and remnants of pastoral villages from centuries ago, complemented by the unique desert-adapted plant, Welwitschia mirabilis, which itself is as old as many of the cave paintings.

As the tour progressed, Gill appreciated more of Namibia’s ancient wonders. Old shipwrecks strewn along the coast, the orange glow of the lichen fields near Terrace Bay, the magnificent noise of the ‘roaring dunes’, sightings of desert-adapted elephants and the Himba community with their unique cultural history as Namibia’s only remaining nomadic tribe. Another highlight was to watch an elephant bull play in the muddy river from a distance of about 200 metres, with a herd of cattle grazing lazily at his side. Tales of stranded passengers and survival of the fittest made up most of the flight to the furthest point of the journey, the Kunene River, where a cold gin and tonic – true British style – was enjoyed on the banks of the river.

The last day included a lazy boat ride on the mighty Kunene with sightings of birds unique to the area and a couple of cleverly disguised crocodiles. It was here that Bertus started telling stories of some of the celebrities he’d had the honour of meeting on the safaris – Brad Pitt included. Gill said in conclusion of her magical journey, “Namibia is an ancient wonderland. It was an extraordinary experience that I’ll carry with me for many years to come.”

Skeleton Coast Fly-in Safaris has been owned and operated by the Schoeman family since 1977 and hosts adventure safaris for small groups of between two and ten people to the Skeleton Coast Park, western Damaraland and western Kaokoland of Namibia.