Swimming and shaping up in Swakopmund

For You Travel’s lay-bay option

Louw Schoeman, a lawyer by profession and pioneer of ecotourism in Namibia, came to know and love the Skeleton Coast and surrounding areas. This led him to taking a leading role in the conservation and proclamation of the Skeleton Coast Park in 1971. He then initiated Skeleton Coast Safaris, an enterprise that his children shared, continued and expanded upon, retaining his high standards and personal attention to details.

A short history of a special family heritage

Established in 1977 when tourism in Namibia was still a fledgling industry, Skeleton Coast Safaris sets a sterling example for ecotourism today, making the Schoeman family proud to represent what their late father achieved for niche tourism in Namibia. Louw managed the company until his untimely death in 1993, after which the reins was taken over by his four sons and daughter, who had grown up while their father was developing his pioneering enterprise and so had the secrets and love for the desert engraved in their souls.

What Skeleton Coast Safaris is all about

As you are escorted through the protected area of the Skeleton Coast, expect to be blown away by the lingering beauty of the desert – the vast areas of elongated dunes, pristine desert plains, fossil beds, rare geological formations, desert-adapted animals and curious vegetation.

Highlights offered on these tours include viewing the Ugab rock formations, the colourful red lava and yellow sandstone of the Huab environs, panoramic views of the Hartmann Valley, ancient Bushman rock art and remarkable Welwitschia mirabilis plant, and visiting a settlement of the ancient and nomadic Himba people. These stopovers can be enjoyed through a range of four different fly-in safaris, all of which include the Skeleton Coast as key destination. A Skeleton Coast safari can be combined with trips to Sossusvlei, Etosha National Park, NamibRand Nature Reserve and Lüderitz. 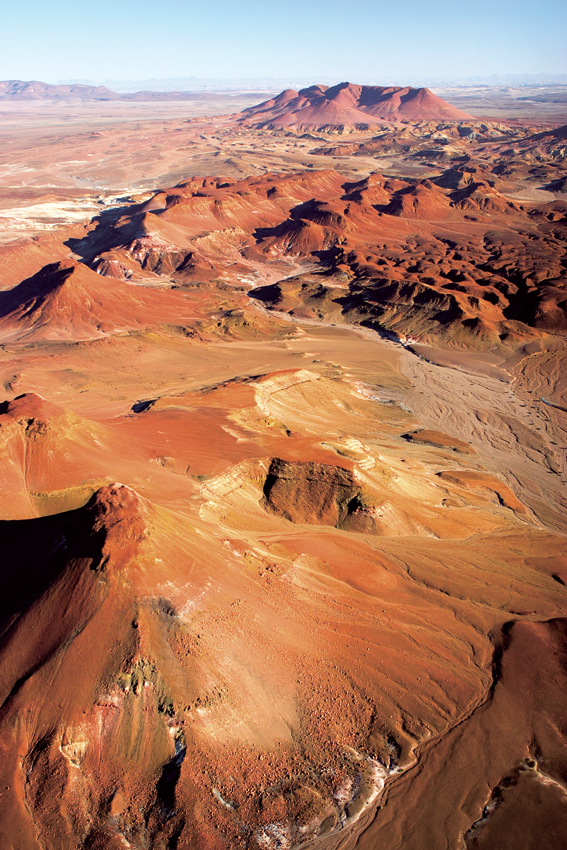 As instilled by Louw Schoeman, everything about the business is personal, from taking only small groups on the exclusive safaris, to the small aircraft that act as safari vehicles with intercoms and headsets for each passenger. As one of the sons, André, stressed, “Communication is important; you fly and talk to guests at the same time, sharing the experiences and knowledge we gained when we were children flying with our father.”

Bertus adds, “There are always surprises. We go to special places that speak to the soul, places we remember from our childhood. It may not be the same place each time, and this makes each safari unique. Our safaris are about the journey. They are for people who wish to travel, to explore.”

“The Skeleton Coast is one of the oldest landscapes in the world. For me the area is stunning. There is nothing like it in all of Africa,” says Bertus. “The northern section of Namibia’s coastline and its hinterland truly showcases a land of contrasting, beautiful landscapes, presenting visitors with the opportunity to leave a footprint where there has been little life for hundreds of years and to learn about the history of centuries-old rock formations, far-distant galaxies and desert-adapted animals. It is an opportunity not many travellers are fortunate to experience in their lifetimes.”