Springtime on the road

TAKE A BREAK between Noordoewer and Windhoek

J ourneys are about exploring and discovering. They are crammed with surprises: interesting people, fascinating stories and intriguing places. Instead of racing to your destination, consider slowing down this spring and spicing up your trip with some colourful stops.

It’s that inspiring time of year when the weather warms and the earth responds, bursting with life. The black-thorn acacias (the ‘swarthaak’) are in bloom, the camelthorn trees boast their bright yellow pom-pom finery and the bees are abuzz.

Across the waters of the Orange River and its ribbon of verdant vegetation, lies the long road to the capital city. There are many interesting places to stop along this route, whether you fancy shopping for rose quartz, walking through a quiver tree forest or taking photographs at the Tropic of Capricorn.

But first there are the wide open spaces north of Noordoewer to make your soul sing. Freedom seems to frolic in the predominantly flat landscape of southern Namibia, and with little traffic and no pit stops until you reach Grünau, this 142 km stretch is reserved for peace – and for playing your favourite selection of music. Signs indicating routes to the Fish River Canyon might tempt your adventurous spirit. If time is on your hands, veer off the tar to overnight in the canyon surrounds and pay your respects to the second largest canyon in the world. If Windhoek is calling and your dates are set, continue northwards…

There are several places to break the journey between Grünau and Keetmanshoop. A few simple padstalle (farm stalls) sell farm biltong, and an array of guesthouses offer a warm bed for the night. The first stop north of Grünau is the White House at Mickberg Farm, home to Dolf and Kinna De Wet – and a small rose quartz mine. Natural and polished clumps of the pink stone, said to calm nerves and restore clarity, are sold from the farmhouse along with a selection of jewellery made by Kinna. The century-old White House, a few kilometres further along the farm road, was built by Friedrich Haschke for his bride in 1912 with material imported from Germany. He failed to consider the importance of water in southern Namibia, however, and unable to locate water on the farm, the couple soon returned to Germany. Water was later found and the house’s love story continued with Dolf’s parents holding their marriage ceremony there. Dolf and Kinna followed the pattern and lived in the house for the first year of their marriage. In the mid-1990s the White House was renovated and became one of the first guesthouses in the country after independence.

Namibia is known for its quality biltong – beef and game – and although you might find some koekies en konfyt (biscuits and jam) and a cold Coke at the padstalle, they are all about biltong and chilli bites. Eat-Sum-More Padstal, open every day of the week, is bedecked with fabric and metal sunflowers and marked by a line of colourful flags. I asked shop assistant Hilma from Oshakati what you should eat some more of. “Eat some more meat!” she replied. Obviously. Further on, Skillies Farm Stall, a simple stall made from corrugated sheeting and named after the icon of the slow road, the skilpad (tortoise), also sells farm biltong, dröewors and cold drinks.

Rose quartz is said to calm the nerves.

Karakul pelts, once considered ‘black diamonds’, are memorialised in copper in Keetmanshoop. 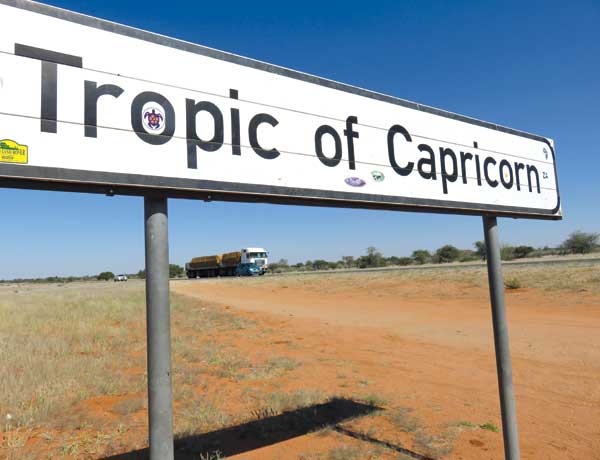 Stop to take a pic at the Tropic.

Karroses, traditionally used as cloaks, are sold along the roadside.

The road passes through an area with gently undulating hills and small camelthorn trees before it levels out again en route to Keetmans, as the town is known locally. It crosses over ephemeral rivers like the well-known Löwen and Huns that remain dry until good summer rains drench their catchment areas and water rushes through the riverbeds in lively exuberance.

Take a drive into Keetmanshoop to view the bronze karakul monument erected on Swakara Road (the pelts were once considered ‘black diamonds’) and the museum. It is housed in the old rock church, consecrated in 1895, that still retains a few rows of pews and has the lofty energy of a sacred place. Visitors can learn about the Nama-German wars of the early 1900s and about the traditional dress of the Nama women. Enjoy a bite to eat at Central Lodge on 5th Ave (with off-road parking) or Bird’s Mansions Hotel on 6th, or, if brave, try some local fare across from Central Park: vetkoek (cakes fried in oil), vleis (meat) and offal. For more information about the town make a turn at the tourism office on 5th Ave, housed in the Kaiserliches Postamt, the old imperial German post office built in 1910.

A highlight of the south is the quiver tree (Aloe dichotoma) and there are several small quiver tree forests near Keetmanshoop. A fourteen kilometre drive on the C16/C17 will take you to the Quiver Tree Restcamp on the farm Gariganus and 25 km further to the Mesosaurus Fossil Camp. Alternatively, keep on the B1 for 20 km until you see the sign to //Garas Park. This is a recommended stop not only for its bevy of quiver trees but for the quirky figures placed between the trees. Jannie Hulme started the tradition of creating the figurines, which was continued by his daughter, Marian. The rustic charm of this small bush camp is well worth the short detour off the main road.

KAROSSES & THE TROPIC OF CAPRICORN

Once back on track, Brukkaros Mountain becomes visible in the north-west, rising 600 m above the plains about 40 km from Keetmanshoop. It was the site of a German heliograph station in the early twentieth century and an observatory for studying the impact of fluctuating solar radiation on the earth’s weather patterns from 1926 to 1931. Between Keetmanshoop and Rehoboth, goats and their herders can often be seen, as can donkey carts which travel on sandy tracks parallel to the tar. They are the local transport in Namibia’s rural areas, characteristic of the countryside.

A long stretch of flat-topped hills, called the Weissrand escarpment, keeps you company as you drive towards Mariental. The roads to the Kalahari branch off eastward from here and streaks of red Kalahari sand peep out from grassy hills. For a lunch break, turn off onto the C21 to Hoachanas just after Kalkrand. The Altes Farmhaus Restaurant provides a place to stretch legs and order a Teufelskrallen burger (beef and bacon burger) or a kudu pie. A short distance further along the B1 rows of springbok karosses decorate the fences around Duineveld to attract passers-by. Karosses, originating from the Khoisan people, were traditionally cloaks made from animal hides. The hides are now made into mats, throws and cushions, with various panels sewn together in decorative patterns. Karosses are quintessentially southern African.

Picnic tables and benches along the route offer opportunities to take a break from the road. The shade of a large camelthorn tree is especially appreciated on this last stretch.

Last stop. The B-One service station and smart shop, next to the new Rehoboth shopping centre, is a convenient place to stop for fuel and purchase padkos (food for the road). Read about the intriguing history of the town and the Baster people on the information panels.

From Rehoboth the route turns into a tree-filled expanse through the hills, winding into the city through the ‘window bridge’ and past Heroes Acre, a large war memorial on the outskirts of Windhoek. Anticipation builds as you near the capital and the onward journey holds untold promise as the country opens its arms wide to welcome you. Mooi ry!

Countryside creativity will always put a smile on your face. 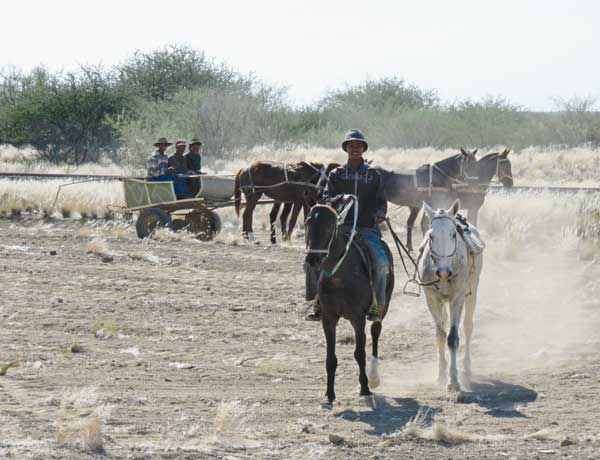 Donkey carts are the 4x4s of rural Namibia.

Snacks, biltong and cold drinks are available at the small quaint ‘padstalle’.