Wild things to see in Namibia

One often comes across the concept of Namibia being the ‘last frontier’ or ‘last true wilderness’. It piques the interest, does it not? And in so many respects these phrases are true. Namibia really is home to some of the last truly wild corners of Africa. Special places where man’s destructive and encroaching reach has not yet penetrated. Wild places for wild things to thrive. And even beyond these strongholds there exist sanctuaries and reserves for wildlife to roam, protected from “civilisation” and its consequences. Namibia is a wild place, and a wildlife lover’s utopia.

The jewel in the crown

Let’s start with one of the most acclaimed and famed wildlife reserves in Africa – Etosha National Park. For more than a century, Etosha has been a beacon of conservation. With an abundance of species and vegetation zones, an astounding variety of wildlife is found here. Etosha is home to the Big Four (elephant, rhino, leopard and lion), as well as other big numbers. There are 642 species of terrestrial vertebrates. Lions, leopard, cheetah, hyena, jackal, African wildcat and other predators prowl the fertile hunting grounds of the savannas surrounding the Etosha Pan. Enormous herds of plains antelope, giraffe and elephant roam across its reaches. It is safari heaven. 16 species of amphibians are found in the park, or under the park rather, as they live underground for most of the year. Etosha even has its own endemic lizard, the Etosha agama (Agama etoschae). There is also the giant tree skink, which can reach over 20 cm in length. For twitchers, the park offers 61% of Namibia’s 644 bird species. The Kori Bustard population is the highest recorded globally. Other species of international concern include the Blue Crane, which has a special breeding ground around the Andoni plain waterhole in the east. During the rainy season, when the pan is filled with water, birds descend on it in droves, including over one million flamingos that have made the trek from Walvis Bay on the coast to breed in the pan.

Probably one of the least tamed corners of the country, the northeast boasts four national parks, each of which is home to an abundance of fauna. In Khaudum, Bwabwata, Mudumu and Nkasa Rupara national parks you will find species that do not occur anywhere else in the country. Hippo, sable antelope, roan antelope, lechwe, sitatunga, bushbuck, African buffalo and many more. Carnivores, including African wild dogs, thrive on a large variety of prey in the lush bush savannah. The area is part of KAZA, the Kavango-Zambezi Transfrontier Conservation Area. This, the largest conservation area of its kind globally, is a stronghold for tens of thousands of elephants that migrate through the five member states – Namibia, Botswana, Zambia, Zimbabwe and Angola. Watch in awe as elephants cross deep border rivers, their trunks raised like snorkels above the water’s surface. It is also, quite obviously, a paradise for birders, with over 450 bird species recorded here.

The rugged terrain of this north-western region is home to a variety of specially-adapted species of mammals. Surviving against all odds in seemingly impossible terrain and climates, these creatures have adapted to thrive with little to no ‘luxuries’ of easy-living. Desert-adapted elephant, rhino, giraffe and lion are rare and wonderful sights to behold on a safari through the region. Go on a tracking experience on foot, or join a special game drive with experienced guides for the best opportunities to explore the wildlife of the region. There, elephants have learnt how to preserve trees by not stripping their bark, so that the trees may live longer. They walk for hundreds of kilometres for water and can survive on much less than their counterparts in other parts of the country. The region is also home to the largest free-roaming population of black rhinoceros in the world. Further west, along the Skeleton Coast, the now-famous desert lions roam. They are no different from other lions in Namibia, but have adapted their hunting skills to their harsh surroundings. Brown hyena also roam the tumultuous shores of the Atlantic coastline and feed off prey such as seals, of which there are thousands in colonies all along the coastline.

Shy and Nocturnal species to spot

Nocturnal, agile and downright sneaky, here is a list of five mammals you are not too likely to see on safari. But they are here in Namibia, so keep your eyes peeled.

Pangolin – The only mammal wholly covered in scales, for protection against predators. When threatened, pangolins will curl into a tight ball and use their sharp-scaled tails to defend themselves. They are currently the world’s most trafficked mammal.

Brown hyena – One of Africa’s rarest large carnivores, they occur throughout Namibia but are most commonly found in the Namib Desert along the coastline.

Aardvark – A nocturnal mammal that spends its days in cool underground burrows dug with its powerful feet and claws. Aardvarks can dig into the rock-hard clay of termite mounds to get to their meal of choice – termites.

Bat-eared Fox – This small mammal is known for its enormous ears (which can be over 13 centimetres long). These foxes are insectivores, with termites making up 80% of their diets.

Honey Badger – Pound for pound, this small yet tenacious carnivore has a reputation for being the most fearless animal in Africa.

Rare, Endangered and Endemic to Namibia

Special species to spot in Namibia because they are rare, endemic – or both – include:

Black-faced impala in Etosha and surrounds

Dune Lark, the only truly endemic Namibian bird, in the Namib Desert, or Namib-Naukluft National Park

Hartmann’s mountain zebra in the central parts, Etosha and the northwest

*Interesting fact: Mistakenly referred to as oryx, Namibia’s gemsbok is a distinct species of the genus oryx, but is only found in the drier regions of the subcontinent. Though the name oryx is commonly used to refer to our gemsbok, it is in fact not completely correct. Many oryx, only one gemsbok. (Also not to be confused with the small Alpine antelope of the same name in German.)

This article was first published in the 2019 EU special edition of Travel News Namibia.

Last Updated on May 5, 2020 by Travel News Namibia 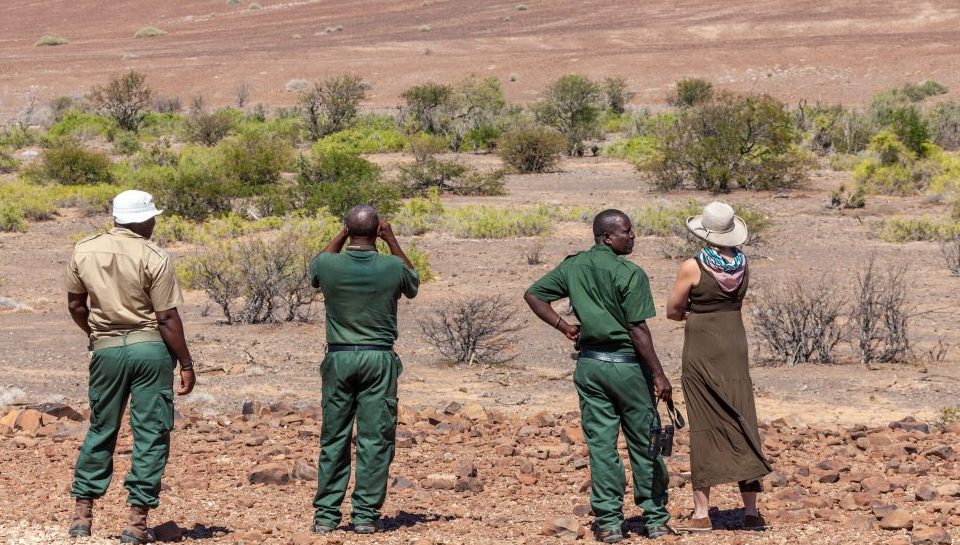