Another World at Serra Cafema

Take a break between Keetmanshoop and Lüderitz

LOOKING UP, LOOKING DOWN

A cross all habitats in the vast expanse of Namibia – desert, bush and floodplain – eager and hungry eyes are continuously scanning the sky above. It is a habit of survival and it is as old as the species themselves.

As the predators and scavengers look up, far superior eyes are looking down. The eyes aloft, often as high as ten thousand feet and more, are the first to detect death on the ground below and swirl and spiral down in an instantly recognizable descent configuration. This descent triggers a response from terrestrial species which follow their feathered partners in finding food for survival.

It is a fact of the natural African world that vultures are the first and probably most important animals to detect death below and alert others. This airborne early warning system is of particular importance in Namibia where vast areas of desert or semi-arid savannah have sparse and scattered populations of wildlife. Top predators and scavengers depend largely on vultures to guide them to food. Unfortunately, the biggest and most destructive predator of them all, man, is all too aware of this and in a perverse notion of greed, is destroying this very system. Man, after killing an elephant or other large herbivore, now attempts to get rid of the system of natural survival and evolution by poisoning the carcasses and thereby killing the vultures so as to “hide” the kill from others that are intent on either finding them or the carcass.

The use of aircraft in conservation makes for the perfect synergy of man, machine and mission.

MAKING A DIFFERENCE FROM UP HIGH

Westair Aviation has acted as a protector with a bird’s-eye view since 2006. Aiding conservation through aerial monitoring of rhinos and surveying vulture nests, the company’s contributions to Namibia’s on-going struggle for wildlife protection are making a difference, one tagged nest or rhino at a time.

Westair, established in 1967, has left its mark on Namibia’s aviation history. After Wolfgang Grellmann joined in 1980, the company surpassed its primary function as a workshop and training centre and became one of the country’s first non-commercial aviation services with a charter license. With 50 years of experience in the aviation industry and a deep love of nature and travelling, Wolfgang stepped on board as a trustee of the Save the Rhino Trust and wanted to find an area within the organization where he could make a significant difference. And so he started Westair’s involvement in rhino conservation, adding aviation to the endeavours.

Over the past nine years the Westair ‘eyes in the sky’ have been trained on the enormous task on the ground below. With support from companies willing to provide expertise, time and equipment, the colossal challenge Namibia is faced with may just be conquerable.

Data obtained from aerial surveys is of critical importance for the management and protection of wildlife at risk.

Thus it is not surprising that some concerned humans in Namibia are copying the vultures’ example by using an aerial platform to detect mortalities and provide an early warning system for the protection of our wildlife. In all operations involving capture and research of wildlife, the process is made immeasurably more viable by having eyes in the sky. We will never be as refined or successful as the vultures, but with training and experience our surveillance from the sky is arguably the most important initial phase of any conservation-related project. And three species that are in dire need of our involvement in order to protect and monitor them are rhino, elephant and the vultures themselves.

Finding and catching a black rhino is a massive logistical undertaking. It usually starts at sunrise with the start-up roar of a huge six cylinder Continental engine. The crew on board the Cessna are experienced in airborne spotting and overall coordination of the operation. From improvised dirt strips the wonder of airflow over metal lifts the craft into the morning air and the process begins. Once a rhino is sighted, the plane – in contrast to what the vultures do – is put into an upward climbing spiral to bring the observation platform to a height from where it can coordinate the whole operation. From the plane the truck, bakkies and team on the ground are all guided into suitable positions and then the signal is given for the helicopter to start and follow directions from the aircraft. It usually goes something like this: “Ok, fly 10 miles northeast and say when you have me visual. Ok, have you visual. Fly straight towards me. Ok, also have you visual, turn right five degrees, now straight, left, left 500 m on your right, close to that rock outcrop in front of you, now crossing the open area on your left, two animals, cow and D size calf, have you got it? Slightly left, OK, got it and going in for darting. You can direct ground crew in now”.

This process is so efficient that when carried out by trained and experienced crews, rhinos can be caught, treated or moved in a very short period of time. The same is true for the actual counting of a population in a given area. In a systematic aerial survey program a huge area can be sample counted. The subsequent analysis and projection of results provide an extremely accurate estimate of the population. Over the years these data show trends in population growth and distribution. Both of these indicators are invaluable for any successful conservation and management program. For elephants, who have a much larger home range than rhino, the distribution and movement data obtained from aerial surveys is of critical importance for their management and protection. So, too, is the location of elephant carcasses and, as mentioned, now more than ever because one poisoned carcass results in the death of many hundreds, even thousands, of vultures.

Thus the very species that spawned the success of aircraft in conservation, the vulture, has recently itself become a focus of aerial surveys. Aircraft are particularly good at finding vulture nests so that ground teams can ring and mark the chicks. Last year over 100 vultures were successfully marked. The use of aircraft in conservation makes for the perfect synergy of man, machine and mission. It merges an age-old biological system with modern technology for the better of the fragile habitat that we all share. 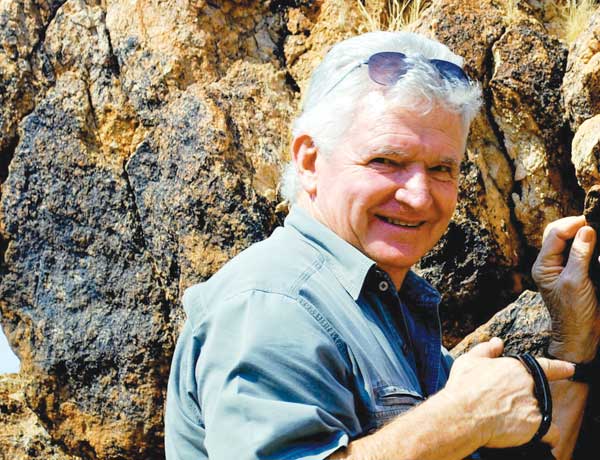 Wolfgang Grellmann, Save The Rhino Trust Board member and Group Chairman of Westair Aviation.