Community Game Guards – on the frontlines of conservation in Namibia

Positive results from the hosting of a successful Adventure Travel World Summit in Namibia last year, are steadily trickling in.

According to feedback from the delegates, the ATWS 2013, the first summit to be hosted in Africa, was the most successful ATWS summit ever – as proudly stated by Environment and Tourism Minister Uahekua Herunga today.

Last week, Namibians rejoiced when the New York Times placed Namibia on the sixth spot of 52 countries to travel to in 2014. Word about the conservancies programme and resultant conservation successions has spread like wildfire, and the world is keen to come and see. 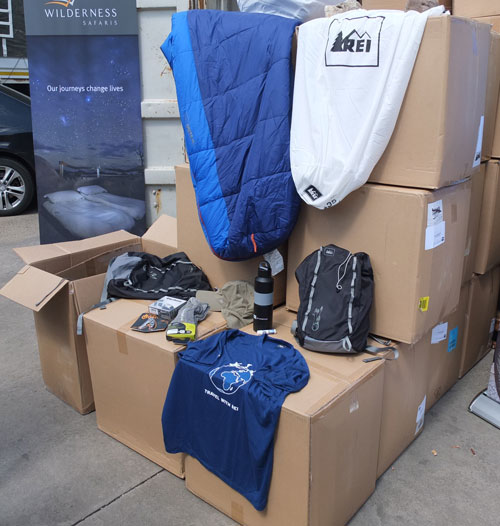 Today Minister Herunga officially unlocked a container which was shipped from the United States by REI , the largest outdoor retailer in the United States. The company operates REI Adventures, and representatives from there were so impressed with Namibia’s conservation track record and the input from local communities, that they declared at the ATWS in October last year, that they would sponsor an outdoor kit for every community game guard in the country.

That shipment was officially received today, containing a number of quality outdoor products that would make any outdoor enthusiast smile with envy. The 500 kits, valued at a total of N$1 million, which will be distributed with the assistance of Wilderness Safaris and The Namibian Association of Community Based Natural Resource Management (NACSO) over the next few weeks to all 79 conservancies, each contains:

The donation shows the support for the troops on the ground.

As Minister Herunga pointed out, this type of support shows those on the frontlines of conservation that they are respected and supported, and as a result interest in the position as a game guard could increase. “This donation will encourage others to join so that conservancies can choose the best of the best. We need to show our support”, he said.

Wilderness Safaris community liaison manager Ketji Jermain said the donation of the gear kits is a direct result of the ATWS being held in Namibia and will help “propel future successes” in conservation. He commended the men and women who are the “troops on the ground”and who “put themselves on the line to protect our success and make sure that we move forward”. He said it was important that Namibians and the international community acknowledge the “sweat of the people on the ground who are our front line troopers”.

All of Namibia’s communal conservancies – 79 in all – will receive the gear kits for each of their game guards. The first shipment is being sent out today to the Erongo region and will then be distributed to the Kunene region and other regions during the next few weeks.

Herunga concluded his talk today by saying that for the past 20 years, community game guards have “protected the iconic wildlife of Namibia … with minimal equipment, they have made Namibia an inspiring destination and success story in Africa’s struggle against poaching”. He said he hoped the equipment they will receive over the next few weeks will help them continue their effectiveness and successes.

Rhino trackers at the forefront of conservation