The scent of conservation in Namibia

Toktok Talkie – toktokkies in the Namib

“Always something new out of Africa” quoted Pliny the Elder. Were he alive, he would have been rewarded by a visit to the Community Conservation stand at Tourism Expo, which took place at the end of May in Windhoek. A great deal that’s new was on show.

Last year the stand hit the high notes with pop diva TeQuila. This year it gave space to ‘Namibia’s Indigenous Natural Products’, showing off natural products from around the country and Scents of Namibia’s essential oils that are in demand on the high streets of Paris, as well as introducing NAM-PLACE to the Namibian public: a new concept in conservation.

Conservancy stand at the the 2013 Tourism expo in May.

That’s where NAM-PLACE comes in. Their part of the community conservation stand in the President’s Hall showed how five demonstration sites are combining national parks, communal conservancies and private farmland into conservation areas.

The theme of the community conservation stand was ‘People, Places and Wildlife’. Visitors were met by representatives from communal conservancies who brought their life stories and their enthusiasm for conservation with them. The exhibition stand aimed to tell the stories of wildlife translocation and expansion, of the growth of tourism in conservancy areas due to lodges and campsites run as joint ventures between the private sector and conservancies, and of the places the tourists from overseas yearn to see.

The success story continues with Namibia’s Indigenous Natural Products, where ancient meets modern. In Pliny’s time people in Kunene may have been using Namibian myrrh (Commiphora wildii) as a perfume. To this day Himba women mix it with animal fat and ochre and spread it on their bodies. Commiphora is an essential oil extracted from the resin of a tree in Kunene, and it is part of a fast growing international industry.

The first commercial harvest of 5 tonnes worth US$ 50,000 was made in 2007. Harvesters in the Kunene conservancies of Marienfluss, Okondjombo, Orupembe, Puros and Sanitatas together earned more than N$ 250,000. The money made a large difference to households, with around a third spent on food, and the rest used for school fees, clothing and savings.

French perfumiers V. Mane Fils, BeHave, Estee Lauder and Aveda all visited Kunene and observed the harvesting, which is fully sustainable, as well as the buying process. V. Mane Fils facilitated the product registration process in the EU.

Harvested comiphora resin is brought to the Opuwo Processing Facility where an essential oil is extracted from it using steam. Early this year a laboratory was added to the facility, which means that all filtering, bottling and packaging of the essential oil is done on site, adding value to the product in-country. 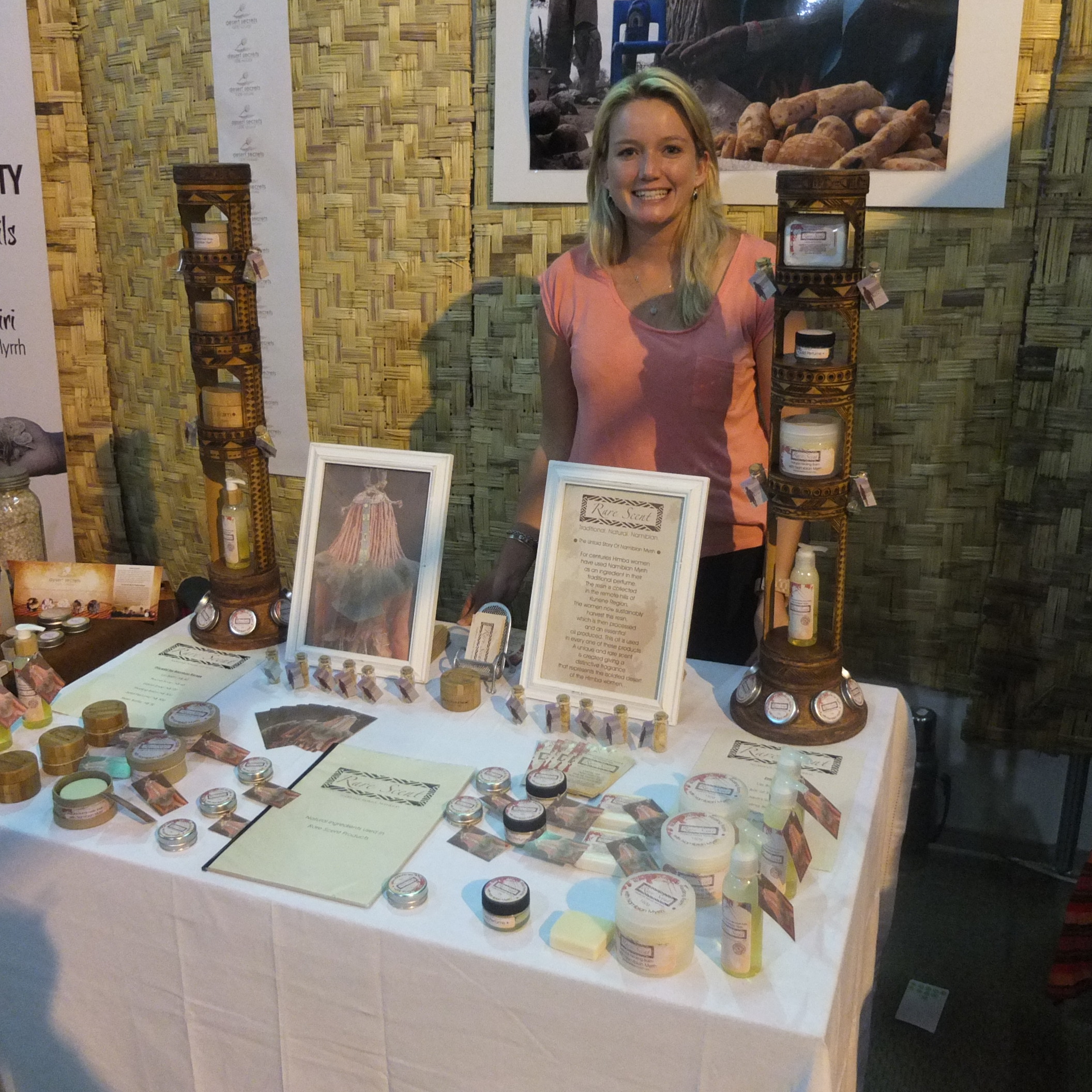 The five participating conservancies are supported by IRDNC, Integrated Rural Development and Nature Conservation, which provided assistance to get production going. MCA Namibia added further assistance in 2010 by bringing in the Natural Resources Institute of the University of Greenwich to provide technical support to Producer and Processor Organizations in the indigenous natural products sector, which includes devil’s claw, Marula and Ximenia.

Visitors to the communal conservation area at Tourism Expo were rewarded with a sniff of the ‘Scents of Namibia’.