Bogenfels – much more than a destination in the south of Namibia

When browsing through travelogues, readers are often compelled by a striking picture to stop turning the page and take a closer look. Whether the photograph is of a landscape, a luxury lodge or a waterhole teeming with wildlife, the image draws them in, often making them decide then and there to take themselves to that very spot.

Bogenfels, a dramatic but graceful rock arch straddling the sea south of Lüderitz, is one of Namibia’s many tourist attractions that elicit this response. Yet, once you’ve crossed the point where a noticeboard states ‘restricted area – no entry without a permit’, the destination is almost forgotten and the allure of the journey takes hold of you.

Out of bounds in former times

Tourists were not allowed to visit the area for many years, due to the wealth of diamonds found in the surroundings. For the past five years or so controlled tourism has been practised here, and this part of the Namib Desert – known as the Sperrgebiet – is alive with colour, texture and intrigue.

At the first of many stops, you explore a tiny fraction of the 26 000 square kilometres that comprise the Sperrgebiet. The landscape is an endless field of succulent plants and colour. Stooping down to the ground, you discover plants with pink flowers atop spike-like stalks, yellow-and-white petals emerging from thick, fleshy stems, and bulb-like tubes seemingly consisting of resin. These are the stems of the Bushman’s candle, a plant that emits pungent incense when burned. When you stand up, the focus changes to take in the vast horizons. You see a springbok positioned motionless in the distance and two ostrich keeping their heads close to the ground as they pick their way across the plains. The surrounding mountains are shrouded in morning mist, while streaks of light create a patchwork across the entire landscape.

Relics of the past

The next stop along the journey reveals signs of man’s activities in the area in earlier times. Nearly one hundred years ago, when the rush for diamonds was in its heyday, the scarcity of fresh water hampered mining endeavours. To solve this, the German colonialists established a base at Grillental, where an underground aquifer fed four boreholes so that fresh water could be supplied to mines as far afield as Kolmanskop and Bogenfels. All that remains today are a few buildings set off against an impressive hillside of marble, some rusted pieces of equipment and a few long-drop toilets. 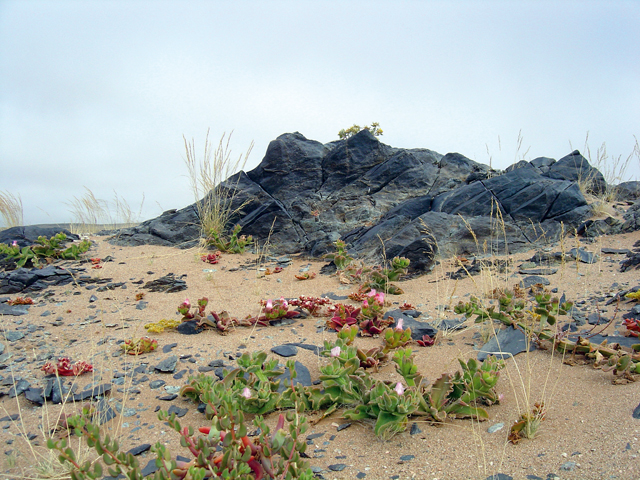 The colours and textures of the Sperrgebiet continue to change as the vehicle glides through the sand up and over soft sand dunes. Manfred stops again to allow his guests to explore another rocky hillside pocketed with hidden treasures such as lithops, rare and endangered plants that resemble stones and include species that are endemic to the area. Further along a cliff face, nestled in a crevice and shielded by the branches of a small tree, a rare wolverine rabbit lies sleeping.

The next stop is Pomona, a mining village where, at the height of its productivity, some 1 500 people lived and worked. For thirty-eight years trains ran along their tracks, the processing plant operated at full throttle, and men toiled against the elements in one of the richest mining areas of the time. A cemetery, resting on a ridge with long views across the mountains to the distant shore, bears the headstones of a policeman, miners and other people who perished at Pomona between 1917 and 1925.

While guests are given time to explore the area and become lost in time, Manfred sets up lunch in one of the abandoned buildings. The menu features classic German fare – Wiener schnitzel, potato salad, bread, cheese, fruit and yoghurt – which are washed down with fresh water and a Namibian staple, Tafel Lager.

Over the valley from Pomona is another forgotten diamond area, Märchental, or Fairytale Valley. In the early 1900s, the ground was said to twinkle like stars when diamonds littering the surface sparkled in the moonlight.

During the day, miners inched their way over the ground on their bellies, picking up the sparkling stones with tweezers. After dark they crawled into sleeping compartments that resembled coffins, where they were locked for the night to prevent theft of the glittering stones. Resisting the passage of time and the vagaries of the elements, a long line of cement boxes bear testimony to this somewhat bizarre security measure of yesteryear.

With so much history and scenic beauty to be absorbed, it almost comes as a surprise to see the Bogenfels rock arch. While the destination wasn’t forgotten, it had become secondary during the journey.

It appears wider and larger than in photographs, and nearby is a small stone arch, seemingly a maquette that the artist to use as model when sculpting its shape. Taking photographs from different angles, the snapper records the way the stone juts out at an impossible angle, linking the land to the sea, capturing how elegantly the arch frames the crashing waves, creating a memorable scene that is part of a bigger whole.

With a cup of coffee in hand, you can climb up one side of the Bogenfels arch and gaze through a gap in the rocks to where seawater swirls below. The smells are clean, fresh and unspoiled. On the beach nearby lies a battered piece of desalination equipment, abandoned to the elements when it stopped functioning; further down the beach you see signs of active prospecting as the search for diamonds continues.

Turning back and heading towards Lüderitz, the pace of the tour becomes clear. With several interesting stops in the beginning where information was given and the atmosphere absorbed, the long ride back gives you time to assimilate all that has been seen, felt and shared.

This article appeared in the Dec ‘06/ Jan ‘07 edition of Travel News Namibia.