Khorab Lodge – Time for a rest

“Life should be lived to the full. You must put back more than you take out, focus on the present, seize and develop opportunities to their fullest, be pragmatic about the feasibilities. But do not let concern for security prevent you from going ahead. Let the future take care of itself. I have always been rich – in happiness, experience, growth and enjoyment. It is in the doing that I have achieved the personal growth, happiness and fulfilment – not on whether the ventures are successful or not.”

Jan Oelofse has lived by his life philosophy, leaving Namibia in his early 20s to work as a game catcher in Tanganyika and later for the Natal Parks Board in South Africa. It was there he conceived a technique to capture animals using woven opaque plastic sheets and the aid of a helicopter. The ‘Oelofse Method’ revolutionised game capture and influenced conservation practices in Southern Africa, making translocation of animals to game parks possible. 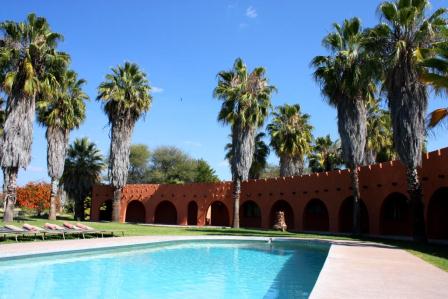 Starting out his game-capture business on land he leased in the Mount Etjo area, he pitched his tent under a large acacia tree, fixing his phone to the trunk, later buying the land and restocking it with a variety of game.

In 1982 he and his wife Annette opened the Mount Etjo Safari Lodge with five rooms, enlarging it to twelve when a film company required extra space at short notice, and introducing the word ‘lodge’ into the fledgling Namibian hospitality industry. The Mount Etjo Safari Lodge has since been renovated, growing into the luxurious lodge it is today. It is Jan’s motto to upgrade all the time.

Following the Mount Etjo and Dinosaur Track signs to the entrance of the lodge, a giraffe watches me as I drive through the gate, while Egyptian geese swim peacefully in the nearby dam. Mount Etjo Safari Lodge is a pleasant surprise from the start, with its own appeal and unique character. Mount Etjo glows in the distance, her rock golden red against the shining blue water of the large dam. The Moroccan-style lodge painted in ‘Etjo’ red, with its many arches and palm trees, catches the sun’s last rays.

While I am watching flamingos, an unexpected boon in the heart of Namibia, I hear a grunt that sounds remarkably like a hippo. Running towards the water, I am in time to see a hippo surfacing, creating rings and rings of amphibian ripples. The surprise continues when I am shown my extremely large room. It is furnished in dark wood and has two double beds with leopard-print covers.

Two cane armchairs and a carved African table make up the sitting area, watched over by four tall wooden giraffes. The terracotta tiles lead through an arch, down the passage into a double-basined bathroom with open shower, a door into a separate toilet and in the alcove at the far end, a jacuzzi-style bath.

Supper is served in a round lapa area in the cooler evenings, with a central fireplace surrounded by safari chairs and the dining tables and benches placed around the perimeter. Large masks, long candles and lamps create a special African ambience. A glass of sherry is offered at the entrance to the lapa and an array of mouth-watering dishes sizzle on the buffet table.

After an appetising starter and a taste of the various salads, the chef explains the selection. Blesbok pot-roast stuffed with bacon and garlic, kudu kebab, springbok fillet, impala sausage and a choice of vegetables line the counter. Manageress Frieda pops by to make sure each pampered guest is satisfied and to organise the activities.

A lion feed after supper gives the guest the unique opportunity of watching lion behaviour. A group of lions is let into an enclosure where a chunk of game awaits them. The guests sit safely inside a hide, which gives them the rare opportunity to witness these large cats at close proximity. As I watch the male, female and sub-adult, I listen to their rumbles and purrs, growls and snarls, the female pausing in her feast to momentarily rub heads with her offspring, balancing the grisly repast with tenderness.

Mount Etjo was a ‘place of refuge’ for the Herero people during the early 1900s in their war of resistance against the Germans. Today the lodge has an atmosphere of sanctuary with its grassy lawn, palm trees and peaceful calm. Mount Etjo Safari Lodge became a part of Namibian history in 1989 when the joint commission of the UN met here to facilitate the restoration of peace and independence for the Republic of Namibia.

As Jan and Annette’s lodge grew and the land expanded into the 30 000 hectares it is today, the former cattle farm was transformed into the Okonjati Game Sanctuary, a rich gameland with a bounty of interesting wildlife from elephants and rhino to black wildebeest and blesbok. The Oelofse’s love for their land extends to their guests, as they keep the game-drive prices affordable to enable each guest to share in the multitude of creatures and wonders of the land.

Private game drives are also available for the privilege of enjoying the area in a smaller group and visiting the rare species game sanctuary, which offers a refuge to animals such as the endangered roan antelope, sable and red lechwe, amongst others. A walk to the dinosaur tracks fossilised into the rock is a chance to walk up a small koppie identifying indigenous trees along the way and to view the three-toed tracks, dating back 230 million years, embedded in the rock at the top.

Mount Etjo Safari Lodge is a custodian for the state-managed black-rhino project. The custodianship programme works in conjunction with other black-rhino projects to increase the numbers of this species in the country. Annette has raised two baby rhino by bottle, returning them to the wild, trying to be as unintrusive as possible.

The lodge has 16 luxury rooms, with wheelchair accessibility, and two large suites, a lounge with a bar area, the arched windows giving glorious views onto the lawn outside and Mount Etjo in the distance. A rounded lapa area, a breakfast room decorated with large African masks, porcupine quills and guineafowl feathers, a large pool and a well-stocked curio shop with eco-information centre provides everything that guests could possibly need. Situated south of Otjiwarongo off the D2483, Mount Etjo Safari Lodge is a good place to pause for a few days and savour pure wilderness.

The Dinosaur Campsite, situated on the banks of a dam and visited regularly by the diminutive and endearing Damara dik-dik has six private sites, each with its own bathroom and lapa area. Campers are welcome to join in the supper feast and activities at the lodge.

The Oelofse team are putting a lot back into their land and their staff with a small private school employing two teachers, giving the children of their large staff component a good breakfast and education, and planting the conservation seed of respect for and appreciation of mother nature.

This ‘place of refuge’ gives the guest a full and unique experience, from its Moroccan-style architecture, a refreshing change from thatched lodges, its water and beautiful game-rich land to its conservation history and dinosaur tracks. Jan’s life philosophy is one that could well be printed in history books.

‘To put back more than what you take out’ is a philosophy we can all relate to and comfortably assimilate into our life values.