In 2007, on the hundredth anniversary of the Namib-Naukluft Park, Dr Mary Seely revealed the park’s uniqueness and wonder in this article for the April 2007 Flamingo magazine.

The Namib: The oldest desert in the world. The desert with the highest biodiversity of any hyper-arid area. A landscape shrouded in fog many mornings of the year. Some of the world’s highest dunes. Raging rivers that end in dry sands and dunes. Linear oases that shelter people and other animals in a seemingly hostile landscape. A panorama stretching to the skyline with every rock harbouring its own tiny web of life.

The Naukluft: A rock massif travelled in geological history across from eastern Namibia. A high point on the Great Western Escarpment with water present all year round. Tufas in the form of rock aprons growing over the millennia and still today. Evidence of ancient rivers that would, in their current position, have to flow uphill. Site of key historical battles. Home of Hartmann’s mountain zebra and a diversity of birds, mammals and reptiles.

Combine these two wonders of nature and we have a prime treasure of the Namibian nation, the Namib-Naukluft Park.

This Namib Naukluft park was not established purely by design. It evolved over its hundred-year history as its value became more apparent and the public became more attuned to its unique set of treasures. In 1907, the German colonial government proclaimed approximately 10 000 km2 as a game reserve – now the central Namib or northern portion of the Namib-Naukluft Park. Some say this was a convenient buffer to make sure the English stayed in Walvis Bay and did not try to expand further inland. It took six more steps of proclamation and expansion and consolidation, with a last slight amendment in 1990, to yield the current 50 000 km2 park. The first of these changes happened in 1968 – 61 years after it had first been established. The status of the park remained unchanged for those first 61 years, and the landscape unaltered, except for the poachers and those who brought their livestock in for ‘emergency’ grazing.

Then the park was enlarged north of the Swakop River to encompass the Welwitschia Flats. At the same time, the Naukluft Mountain Zebra Park was proclaimed to protect the endangered mountain zebra. These two parks were joined together in 1978 and proclaimed as the Namib-Naukluft Park with a significant southward extension incorporating part of Diamond Area 2. Political intrigue, welwitschia, mountain zebra protection and an area once thought to harbour diamonds – the dreams of conquerors, conservators and those wanting to ‘get rich quick’ – are all intertwined in the history of the Namib-Naukluft Park.

This park, reputedly the third-largest park in Africa, occupies about 250 kilometres of Namibian coastline from north of the Swakop River southwards to the Aus-Lüderitz highway – although Walvis Bay remains excluded, as it was in 1907. From the coast to the interior, it stretches for about 100 kilometres apart from the huge eastern bulge that includes the Naukluft Mountains along the Great Western Escarpment. Not just desert but a well-watered mountain massif, translocated in ancient times from the eastern reaches of present-day Namibia.

Strong winds may be the only constant, but they come from different directions in different areas at different times of the day and year. And adapting to all this variability is the great diversity of plants and animals, small and large, each with its own niche in this varied landscape. Climate and landscape are two of the primary defining characteristics of the Namib-Naukluft Park.

For many familiar or even just becoming acquainted with the park, 100 years is just an arbitrary number of years relating to administrative arrangements. Of course, the history of the area extends much further back. Archaeological evidence suggests that the dunes south of the Kuiseb River were at least intermittently occupied by Early Stone Age people, probably Homo erectus, around 200 000 years ago. Human artefacts from the past 10 000–15 000 years are common at inselbergs or along ephemeral rivers. Even seeds of the !nara, the signature plant of the Topnaar community, are found scattered in ancient deposits throughout the park, including in rock shelters on the distant escarpment.

Extensive middens, identified as heaps of shells and bones, found along the coast indicate at least seasonal occupation and use of coastal resources by people during the past several thousand years.  These people were also noted by early sailing ships passing along the ‘Skeleton Coast’ and further south. Inland, ‘stone circles’ provide additional evidence of people’s early presence. Certainly, during the past several hundred years, the area was used by semi-nomadic livestock herders when rain provided sufficient grazing.

For the past 400–600 years, Topnaar communal farmers occupied the lower Kuiseb River, where they still reside today, within the park. Early European explorers found good hunting conditions, and rapidly eliminated the nomadic elephants, rhinos and other large mammals from the ephemeral Swakop and Kuiseb rivers crossing the desert. Thus one important role of the Namib-Naukluft Park is to help Namibia retain a part of its long and varied history in the arid, western desert.

Today the Namib-Naukluft Park supports thriving tourism ventures within and around its borders. While the ‘central Namib’ has a series of popular camping sites, tourists regularly take day trips from the coastal towns. For the adventurous, horse safaris cross and camp on their way from the escarpment to Swakopmund. Further east and south, the park is surrounded by a burgeoning array of lodges, adding capacity to the park campsites. Sossusvlei is the most sought-after destination in the Namib-Naukluft Park. Of course, for those in the know, less frequented places provide even more exclusive experiences and a chance to observe inimitable plants and animals adapted to this spectacular arid landscape. 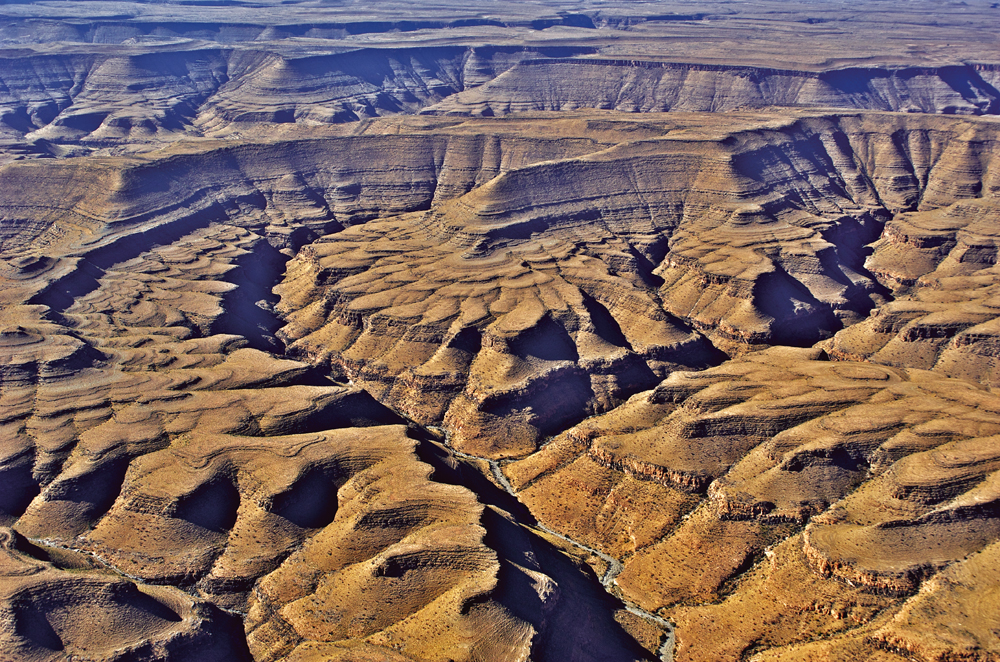 Today the Namib-Naukluft Park is home to the Gobabeb Training and Research Centre, providing opportunities for young and old Namibians to learn more about this unique landscape. The centre is the source of much of the information available about this ancient desert in the heart of the park. While the park is 100 years old, the Centre was first visited and the site selected just 50 years ago. Despite the variety of reasons for its establishment over the years, the Namib-Naukluft Park encompasses some of the world’s highest dunes, rugged mountains, deeply incised watercourses, spectacular desert scenery, a rugged coastline, high plant and animal diversity and a rich evolutionary and recent history.

Today, the Namib-Naukluft Park is also home to the newest uranium mine in Namibia, the Langer Heinrich Uranium Mine started a few days before the park entered its 100th year. While the history of the park has been one of expansion and consolidation, the future will probably focus more on accommodation of additional interests within its current boundaries. Much of the central Namib is underlain by alluvial deposits of uranium, extensive in their distribution although apparently not too deep. Prospecting licences are being registered throughout the original ‘game reserve,’ as well as beyond its boundaries in Namibia’s dry west.

In the late 1800s and early 1900s, prospecting took place extensively within the boundaries of the existing park. In the early 1900s, the Hope and Gorob Mines were exploited for their copper and Hope is again the focus of attention of active prospecting – 100 years later. Excavation for dimension stone and gypsum are the other ongoing mining activities in the park today. Along the coast, more than one hundred years ago, German diamond miners established a number of settlements, including Fischersbrunn, Reutersbrunn, Meob Bay, Charlottenfelder, Holsatio, Grillenthal and Conception. Rusted machinery and derelict buildings remain as evidence of diamond mining, and now form part of the tourist attraction of the coastal reaches.

And what of the next 100 years and beyond? Although not just part of the Namib-Naukluft Park per se, the planned transboundary linkages encompassing the Skeleton Coast Park and Iona in Angola to the north and the Richtersveld to the south will result in a protected area extending from Angola along the entire Namibian coastline to South Africa. Such an extensive protected area would enhance the value of the Namib-Naukluft Park as a key component of arid, western Namibia. At the same time, the Namib-Naukluft Park would constitute the central ‘jewel in the crown’ of this three-country protected area. Moreover, numerous private conservation areas lie north and east of the park.  Although this land is in private hands, it effectively enlarges the conservation area even more.

Looking back from the future, the Namib-Naukluft Park will be recognised as a catalyst and the key component in development and conservation of Namibia’s hyper-arid desert, and as making a solid contribution to long-term sustainability of Namibia and its people.

This article was originally published in the April 2007 Flamingo publication.