Community camping and cultural experiences in the Kalahari

When entering the Omaheke Region east of Windhoek, the landscape consists of yellow grass and an expanse of small trees and bushes. A few small hills are visible in the distance and warthog warning signs are positioned every few kilometres along the roadside. As if complying with the signage, warthog families graze on the grass verges looking up occasionally as the cars pass, showing their long tusks and coarse, grey skin.

Omaheke, meaning ‘sandveld’, describes the cattle-farming region well. The basic campsites in the area combine simple camping on fine Kalahari sand under the shade of acacia trees with a rich cultural experience. Different ethnic groups are highlighted at each campsite and by visiting them all, you gain a sampling of three interesting Namibian cultures, Herero, San and Batswana.

The cultural tour can begin either in the town of Gobabis, approximately 200 km east of Windhoek, or be incorporated into an itinerary that includes Botswana. An alternate route would be to travel from the Sossusvlei area via Mariental to Aminuis for a cultural camping experience, continuing on to Gobabis.

Situated next to the Aminuis salt pan, 180 km south-east of Gobabis, Kambahoka Restcamp consists of seven campsites, each with a table and barbecue area, and basic facilities. Manager Njandee Kazongominja greets guests dressed in her long full traditional Herero dress with puffed sleeves and pointed fabric headdress. With poise and bearing she creates a striking impression walking across the sandy campsite with the white strip of the pan visible in the distance. Her husband Ismael, with a springbok skin around his waist and a jackal’s tail and kori bustard feather on his head, describes the significance of the demonstration ‘sacred fire’. 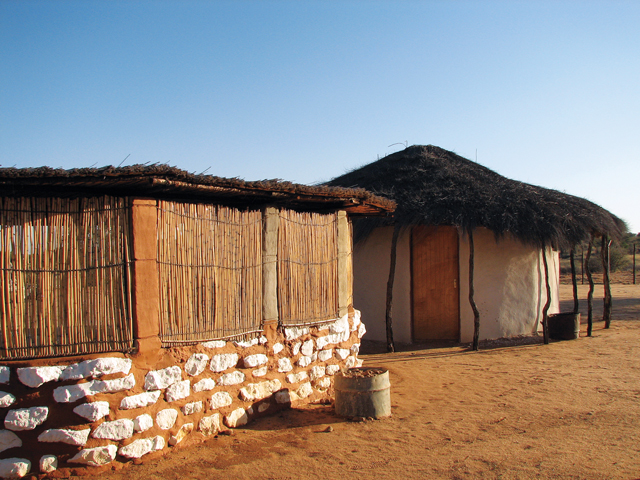 The sacred fire is an essential part of the traditional Herero household, for spiritual well-being and connection with the ancestral spirits. As Ismael explains the traditions associated with the fire, the children giggle and wait expectantly for their chance to perform a short song. Other activities offered at Kambahoka include San/Bushman, Batswana and Bakalahari singing and dancing, a walk on the pan and a trip to the site of a former German camp in the Herero-German war of 1904.

It is necessary to bring your own groceries, although the scattered town of Aminuis does have a small shop and petrol station. Use water sparingly, as it has to be brought in from the town. A craft shop made from beer bottles and cement sells small, brightly coloured Herero dolls and a few items of San jewellery. The restcamp is named after a Mr Kambahoka, who settled there after the war. Kambahoka also means ‘change in life for the better’, a suitable name for the community campsite initiated by fourteen women in December 2005.

For a Bushman/San experience, Sãa Ta Ko, in the extreme east, close to the Botswana border, is situated a short drive past the Corridor 13/Motsomi town. From the C22, turn onto the D3816 towards the Botswana border and then south onto the D3820 for approximately 24 km. Look out for the bright-red Coca-Cola sign. Basic groceries and fuel can be bought at Corridor 13. The campsite is built on the land of a San village called San Plaas (farm) or Corridor 17B. Once again acacia trees provide shady spots on the fine sand.

A rustic but neat ablution block made from branches has flush toilets and taps, and a wood-burning ‘donkey’ provides hot-water showers. On a visit to the demonstration traditional San village, the visitor finds a group of traditionally dressed San women sitting around a fire, making milky-white beads from fragments of ostrich eggshell. San singing and dancing around a bright fire is a fun-filled experience for onlookers. The dancers sing greetings and happiness songs about hares and cocoons. Light in foot and in spirit, their joyous energy is catchy and the night with its waxing moon and blue starry sky holds the magic of the performance. During the day, a bush walk with the San through the long yellow grass is educational and inspiring, as roots of plants are pointed out for different medicinal purposes. It also offers brief amusement as a member of the village expertly and hilariously mimics an ostrich approaching a trap. This simple camp is worth the trip for a San experience on San land.

This is the third community campsite in the Omaheke Region, situated in the Epukiro Roman Catholic Mission or Epukiro RC, as it is known. The turn-off to the town on the D1635 is visible after 58 km on the C22 north of Gobabis. The simple campsite positioned at the top of the hill is part of a Batswana village, called Metsweding, that has an interesting history.

Manager of the campsite, Ms Euphrosine Mbuende, explains how the Batswana people, constituting the smallest ethnic group in Namibia today, left South Africa and the colonial rule of the British, travelling northwards into Namibia in the late nineteenth century. The Batswana group met Roman Catholic missionaries in the town of Gobabis and asked them for their help in finding a place where they could settle down and practise their faith. In 1903 they were brought to the Epikuro Roman Catholic Mission farm and created their Batswana village.

In 2003 a small group of Metsweding women came together to begin their own project called Boiteko, meaning ‘trying very hard’ in Setswana. They decided on the project to enable them to pay for their children’s school fees and ‘to keep the pot boiling at home’. They are still striving to achieve this goal as all the money that has come in to the group is being channelled into the building of the campsite. An ablution block and two traditional huts have been erected, and a museum is currently being built.

The activities offered for guests include a village walk to experience the everyday contemporary lifestyle of the Batswana people, from the making of food in the three-legged cooking pots to the cow-dung and clay that is still used to build houses. The tour may include a visit to the primary school and kindergarten, depending on the time of day, the community church, the old church on the mission grounds and German graves. It ends with a performance by either an adult or school cultural song-and-dance group.

As the sun dips we take in our chairs from the shelter where we have been sitting looking out onto the little Batswana village, thus ending my visit to the three small and basic community campsites of the Omaheke Region. A rich cultural experience of Herero, San and Batswana culture, it provides the opportunity to meet the local people and to learn about the interesting ethnic groups of eastern Namibia.

Back on the sandy roads, I avoid the cattle, goats and donkeys. Further on, as I near the tar roads, warthog families graze and dig on the grass verges.

This article was made possible by Cymot Namibia