Waterberg Plateau Park – All You Need to Know – Maps & More

“The amazing thing about Waterberg is that it is unique in terms of the variation in the vegetation and geological makeup. Add to this the fact that everything is basically constituted at the top of the plateau and you have one of the most pristine conservation areas in the world.” – Kaiporo Kandji • Warden, Waterberg Plateau Park, Ministry of Environment and Tourism

Over 150 million years ago, dinosaurs roamed the plateau at Waterberg.

Now you can too, and discover the amazing variety of plant and animal life that thrives here today.

Rising some 200 metres above the surrounding African savannah, the Waterberg Plateau with its brilliant brick-red sandstone formations and lush green vegetation is a wonderous place to explore.

Take on the challenge of a three-day hike, accompanied by a park ranger, to the Waterberg’s summit, or the thrill of setting out on your own 42-km self-guided trail.

Catch a glimpse of an illusive leopard or patiently stalk a herd of sable through the dense bush.

Guided game drives on the plateau, plus time spent in a hide lying in wait for rare species to approach a waterhole, give you the chance to learn more about one of the most unique conservation areas in the world. 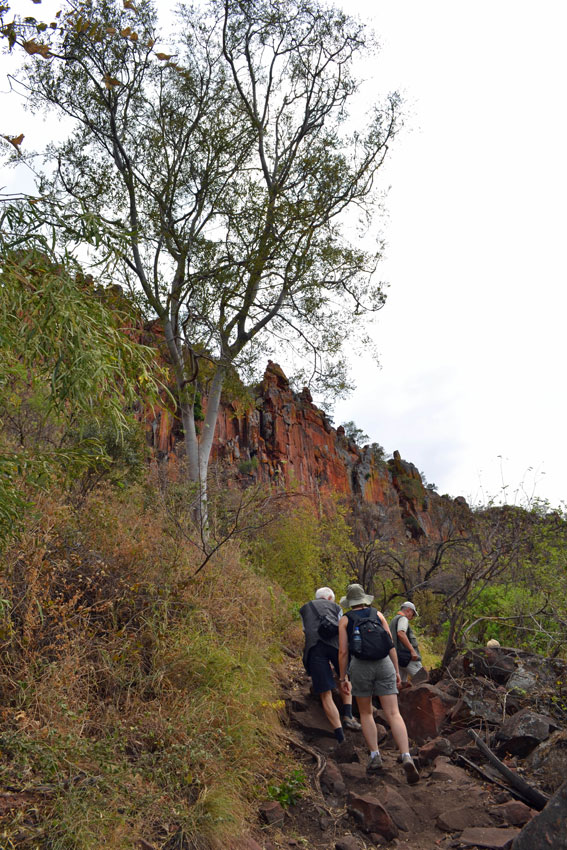 A natural fortress for conservation

The Waterberg Plateau Park is not only an island of vibrant colour and biodiversity; it presents a natural opportunity for conservation. The park was initially proposed to protect eland, Africa’s largest antelope, but, recognising the natural physical defences of the plateau against human and livestock encroachment, conservationists soon introduced other endangered animals in an effort to establish protected breeding populations.

Black and white rhinoceros, Cape buffalo, and tsessebe, sable and roan antelope have all been reintroduced onto the Waterberg Plateau. These species are on the increase and surplus populations are released regularly in other protected environments. State-of-the-art game bomas have been constructed, in which captured animals are held prior to auction and relocation. The Game Products Trust Fund (GPTF) ploughs profits from the auctions back into conservation. Poaching has been eliminated, and the Waterberg Plateau Park stands as a natural fortress for conservation.

A world unto itself

It is hard to imagine Namibia submerged in water or smothered in ice but both have happened and the Waterberg is the result. Made of harder material than the surrounding areas, the plateau has weathered the crushing forces of climate change and the resulting erosion. Today, thanks to its daunting cliffs, the Waterberg Plateau Park remains a highly biodiverse environment that is a world unto itself.

Rhinos in the park.

More than 35 years after it was originally proclaimed to protect eland, the species is now thriving and herds of up to a hundred strong often congregate on the plateau. Some twenty-five other species of large mammals occur here, including giraffe, kudu, impala,  and warthog. Predators are equally at home on the Waterberg. Leopards prowl along the cliffs, while cheetah, caracal and black-backed and side-striped jackals are more likely to be seen on top of the plateau or in the savannah below.  Occasionally wild dogs and lion visit the plateau from the east.

Waterberg is a birding delight! Over 200 species have been recorded in the park. In addition to hosting 33 species of birds of prey, including black eagles, the Waterberg has the highest density of peregrine falcons in Africa.

Man’s mark on the Waterberg

The first human occupants at the Waterberg were the San, whose engravings can still be seen on the rocks at the Okarakuvisa waterhole. The images may well be tens of thousands of years old. A community of San still lived at this site until the end of the 1960s. While the Waterberg has witnessed various conflicts, the most dramatic military encounter occurred in 1904 when German colonial forces fought the Herero people who had staged an uprising led by Chief Samuel Maharero. 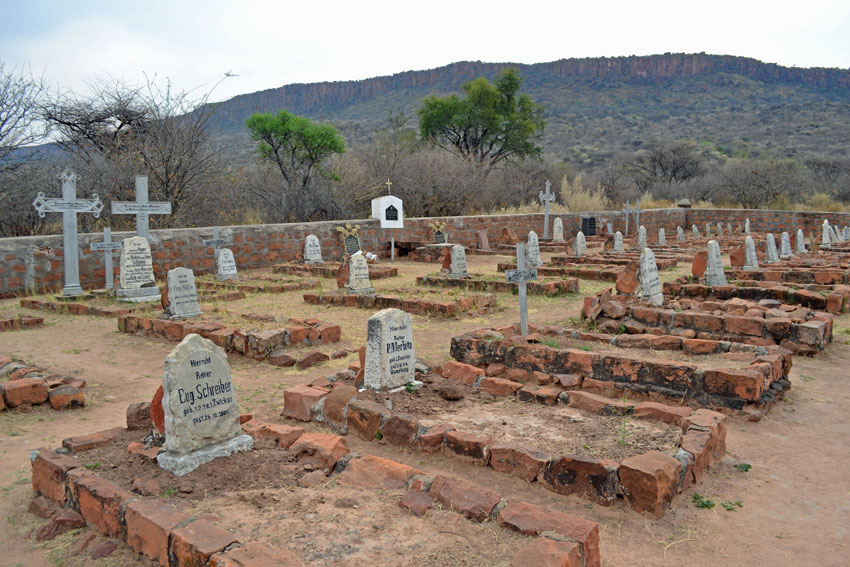 The Hereros subsequently fled into the waterless Omaheke plains with their treasured cattle and many thousands perished. A small, rather mysterious, cemetery near the park entrance holds the remains of some of the dead. In 1907 the Waterberg was proclaimed Game Reserve No 4 by German authorities. It was de-proclaimed in 1928. Fruit farms were established at its base, supplying the whole country with citrus fruit. These are now gone. The park was established in 1972 and is still expanding.

Trails and so much more

Trails are very much part of the Waterberg experience, and nine have been laid out along the base of the plateau in the resort. In addition there are three day hikes accompanied by a park ranger or warden on the summit and a strictly controlled 42-km self-guided trail. Hikers follow natural routes, along cleared trails and through dry river courses. Hikers are expected to be self-sufficient, although there are shelters with water. Fires are not permitted.  Waterberg Plateau Park fact sheets provide more details on the hiking trails. Bookings for the longer trails are made with the Namibia Wildlife Resorts office (www.nwr.com.na).

Please note: The summit is off-limits to unauthorised vehicles. There are daily guided game drives (approximately four hours) that also include visits to state-of-the-art hides on the plateau that offer excellent views of waterhole life. Participants are advised to bring warm clothing.

How to get there:

Take the B1, the main north/south tarred road, and turn east on the C22 to the Waterberg Plateau Park. Take the D2512 for 33 km up to the park’s office at Onjoka. The park is located 60 km east of Otjiwarongo and 300 km north-east of Windhoek.