Woven grass baskets have been around since the age of the sun gods, tokoloshes, and traditional bush doctors. But somewhere along the line of modernisation and the industrial revolution, this sophisticated, age-old skill almost became lost – particularly amongst the Khwe communities. Plastic became the new craze and what with Tupperware parties and other such activities, traditions lost their value, became untangled, and were swept under the rug of artificiality. 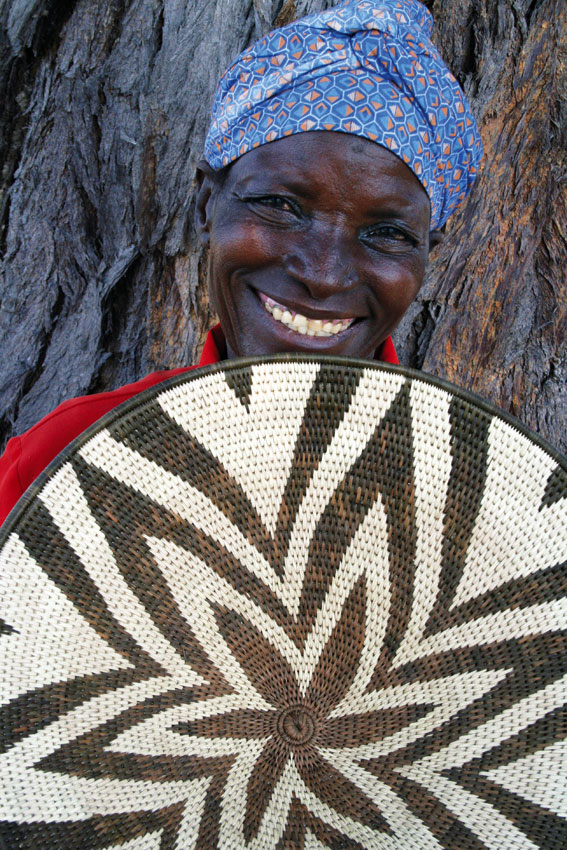 Since early times functional items for domestic use have been made from locally sourced materials according to traditional designs and forms. In the Kavango, Caprivi and Owambo regions, women have and continue to spend their mornings in the fields, collecting grass and palm leaves for weaving all kinds of household items. Although in these communities the skills are still passed on from mother to daughter, the Khwe missed out in this respect, and the art of basket weaving became obsolete.

A new interest in old baskets

Then, some fifteen years ago, a woman named Annie Symonds, former craft consultant for the Integrated Rural Development and Nature Conservation (IRDNC) organisation, happened upon a different kind of basket amongst the San community of western Caprivi. She explains: “In 1997 an unusual type of wild fruit and berry-collecting basket appeared from the group at Dwarspan.

It was immediately recognised as something new and different; and it had market potential, so it was nurtured and developed. Clearly, judging by the sudden numbers in which they began to appear, this was a traditional basket that was undergoing a revival. Many of the older women knew how to construct the baskets, whereas a few were familiar with the more open, bowl-shaped, basket style. The method of weaving one strand of palm in and out of vertical palm stalks is totally different from the technique used to construct the flour baskets in East Caprivi, and the Kavango and Owambo regions.”

“A year later, up to one hundred baskets were produced on a monthly basis, and more women joined the group of craft producers as they realised the potential income they could earn from making their traditional baskets. Older ‘master crafts  makers’ taught the younger women how to make the baskets.” And so the Khwe basket was rediscovered and the modern interest in traditional baskets engendered, saving an old tradition from dying out, and empowering women in the process.

The baskets of each region are unique in their own way: the Khwe baskets – round, with handles – were traditionally used for collecting wild fruit in West Caprivi, while the open baskets from East Caprivi and the Kavango were used when harvesting crops and sifting millet and maize flour. Karin le Roux, director of the Omba Arts Trust – which supports the weavers by buying good-quality stock in large batches – explains, “Basketry is strongly linked to agricultural customs. Traditionally the baskets were quite large and used for harvesting, winnowing, carrying goods on the women’s heads, and for storage purposes.”

Feed the grass, weave the palm, and do it sustainably

According to traditional techniques, baskets are coiled with locally harvested veld grass and then woven through with the makalani palm, Hyphaene petersiana. The process involves a constant feed of grass, being wrapped by strips of palm leaves that have been cooked and dried for three days. The palm is harvested from specific areas, as it is not found naturally in all of the rural regions. The women thus either take a walk through the bush to harvest the palm leaves themselves, or trade in some of their own products, such as papyrus, for the leaves.

The practice of harvesting the palm is done in a sustainable manner, explains Annie, “Community Resource Monitors in the area keep an eye on the palm-collection process to ensure that sufficient new shoots are left for the plant to survive and that no damage is done when it is harvested.” Karin adds, “The weavers have received training in the sustainable harvesting of palm and dye plants, and the use of these resources is continually monitored.”

The palm is dyed beforehand by boiling substances such as rust from old tins, aloe leaves, berries, roots, bark, leaves, and cow urine with the strands of prepared palm leaves, to allow the artists to create different coloured patterns on the basket. Tree bark and roots are used from the Pterocarpus angolensis, Guibortia coleosperma, Baikiaea plurijuga and Peltophorum africanum plants, amongst others. And so the shades of brown, purple and yellow are obtained through this process.

It takes three to four days to produce a medium-sized basket, providing life doesn’t pop up in between! In reality and under normal circumstances it thus takes about two weeks to produce such a basket.

THEN ALONG CAME OMBA

“In the beginning the weavers used plain patterns and natural-coloured palm leaves, but as the art progressed and new dyes were introduced, a whole new world of basket art evolved,” says Karin proudly.

She herself played a significant role in encouraging and developing this intricate art form, and has kept the creative juices flowing by conducting training workshops with basket weavers. “The Omba Arts Trust is all about supporting sustainable livelihoods of marginalised communities through the development, sales and marketing of quality crafts. Many of the communities we support live in conservancies where craft is an important component of Community Based Natural Resource Management strategies.

This programme ensures that wildlife and other natural resources are conserved or utilised sustainably in return for financial and other benefits. Women in particular benefit from craft-making and often resort to other materials in an effort to sustain scarce resources.” Karin and the Omba Arts Trust have been supporting women through craft in the Kavango, north central, and Caprivi regions since 1992.

Efforts to reward the basket makers for quality, and in particular for the artistic and original examples of their work, are enabled through a pricing system that is linked to a grading system.

Visit the Omba Arts shop and office in the Old Breweries Complex in Windhoek, where a large selection of baskets and other craft products are on sale. The Trust also exports to private buyers in the USA, Australia and Europe, amongst others.

“Baskets make life easier for local women. Most of the women we support are from female-headed households and depend on the sale of their crafts to survive and feed their families.”

As assistant director of the IRDNC in the Caprivi Region, Janet Matota is a true pioneer of community-based natural-resource management. Starting out as the country’s first Community Resource Monitor back in 1994, she fully grasps the needs and wants of crafters who have to eke a living from natural resources while facing hardships such as poverty, unemployment and HIV/Aids. Her endeavours have promoted and strengthened the role of crafts as a source of income for rural women.

Janet, through her role at the IRDNC, also gives technical support to the crafters and management at Mashi Crafts, a craft hub situated 118 km west of Katima Mulilo in Kongola. She explains that before the building was constructed, women used to bring their baskets to the sides of the roads to try and attract attention and elicit a little income from passersby. It is here where the IRDNC stepped in and started building a relationship with the local women, providing them with training in the use of natural resources for making various crafts and also quality control to ensure that their products were up to standard. The relationship developed in such a way that in 2008, the IRDNC gave full ownership of Mashi Crafts to the community.

Today there are about 299 women weaving baskets for the shop and earning a livelihood to support their families. Each of the 11 communities that supply to Mashi has a ‘master weaver’ who teaches the skill to other members of the community.

The Mashi Crafts shop is managed by Bester Mutanincwa and is open from Sundays to Fridays from 8:00 to 17:00. The shop sells a wide variety of locally produced goods, including woodcarvings, jewellery, key holders, hats, bags, and recycled-plastic animals and other creatures. Projects for the future include plans to establish a local tourism hub with a coffee shop, offices for guides, conference facilities and upgrades of the picnic area.

Agnes Kumana is not only the chairlady of Mashi Crafts; she is also a mother of two and a basket weaver herself. “I used to cut reeds in the river to earn a little money for my family, but then I realised I could also make baskets to secure my income and to keep the weaving technique in our community going. I started about five years ago and have never looked back. Now I can pay for my children’s school fees, my family’s medical bills, and upgrade my lifestyle in general.”

Many years down the line, German product designer Stefanie Zöller entered the scene. During her time in Namibia teaching a course in product design at the College of the Arts in Windhoek, she visited the countryside and became aware of the basket-weaving technique. “I realised that this technique could be used to create other products; it holds a lot of potential. I then learned the basics from a Namibian friend and created my first mini basket.” The rest, as they say, is history.

“I’ve always liked the idea of using modern waste materials in combination with the traditional weaving technique.” One day, while scouting for resources, she happened upon the plastic strips used to hold bricks in a pile. She experimented with them and realised how strong and durable they were, and that they could be used for many of her products. So she devised a new kind of basket. “Since my aim is to make products that will last, the idea of storage baskets sprang to mind. There is no way that these baskets can ‘expire’ – unless you go completely wild and jump up and down on them.”

The storage baskets  – they are quite funky with their dark-green outer and colourful inner components – are made with a simple ‘in-and-out weave’ method, but then Stefanie explored further with the traditional Namibian weaving technique and lo and behold, she had created a chair! So far she’s completed two chairs and is in the process of making a tabletop. But this is a long process. “One chair seat took me a full five days to complete. I was feeding colourful ribbons through the plastic ‘brick’ strips for the entire day.”

Apart from the material, Stefanie’s tools are also somewhat different to those used traditionally. She uses pliers for bending and shaping, clamps to hold the strips in line, scissors to cut the strips into thinner shapes, and a screwdriver to pull everything back together.

Passionate about ‘transforming dump into design’, Stefanie will gladly make products on request, or help with training and teaching the skills to do so if required.