Namibian and Finnish Musicians on Fire!

It started so pleasantly. It was still early morning and I was taking it easy, both hands on the steering wheel and a foot lightly on the accelerator. I enjoy this type of road trip. The job is done and I’m heading home, so there is no hurry, no stress and lots of interesting scenery to take in.

Just outside Rundu I noticed that the magunis were starting to come into season. I always buy some of the fruit to take home, so I slowed down to scan the produce on display. They have to be a bright, deep-orange colour or else they are no good. I spotted a deserted table with those very same bright, deep-orange magunis – just what I was looking for.

As I climbed out of the vehicle, I saw there were also bright-red beans and some dull-greyish kernels. Mmmm… interesting.

The child that came running from the nearby village could not have been older than ten, maybe twelve years. I could see her smile from about fifty metres away.

“I want some magunis. Are these fully ripe?” I asked. She grabbed them and started shaking them. “No problem, I’ll give you the best, sir. How many do you want?”

“Twenty, please, if you have that many.”

I watched as she carefully picked through her stock, looking at the colour of each and giving it a shake. Every one that met her discerning standard was put into my bag; the rest remained on the table. With my magunis in the bag, I shifted my focus to the remaining produce.

“Are these eefukwa?” I asked, pointing to what looked like beans. “Yes,” she smiled, “but we call them nongomene.” I immediately bought a tin-full, and another tin-full of the dull-grey kernels that turned out to be marula kernels.

Back home and in the kitchen, I skinned the beans, and placed them in a bowl of water to soak before heading for bed. And that, right there, closing my eyes and drifting off to sleep, was the last calm and peaceful moment I had in my encounter with these beans.

In the presence of new ingredients, a cook has to ponder several important questions. What to make? What to add? For how long? In what manner? To what effect? But perhaps most important of all: how?

Up to that point of putting the eefukwa into the pressure cooker, I admit I’d had no experience with these beautiful bright-red artifacts, which have as many names as there are cultural groups growing them.

From my research I know eefukwa are bambara nuts (Vigna subterranean) and that they are the third-most important legume in semi-arid Africa. So, a lot of people cook and eat bambara nuts – I am not going this route alone. That is comforting. 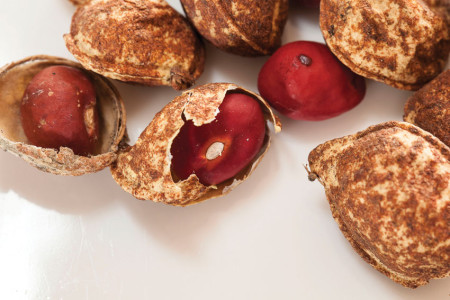 I also know that these nuts – actually, like the peanut, bambara nuts are legumes, not nuts – grow in soil conditions where no other self-respecting legume would set root. Therefore, they are hardy and drought-resistant – that should have been a vital clue. Yet, like a true romantic, I chose to ignore it.

Instead, I revelled in the fact that they are nutritious – low in fat (5%) and high in proteins (18%) and carbohydrates (65%). They are grown mainly as an intercrop with millet, maize, sorghum, yams and cassava.

Yet not a recipe in sight

I contemplated all this information while adding three cups of soaked bambara nuts into my pressure cooker. In only the few minutes it takes to reach full pressure, I got the chance to peruse a few African cookbooks for recipe ideas. I should not have been surprised. Ten cookbooks, eight of which have the word ‘best’ next to ‘African’ in their titles, and not a single recipe. It seems that not only is the bambara nut one of Africa’s most common, yet most ‘forgotten’ crops; few African chefs, if any, warrant it with a recipe. Dorah Sitole’s book of recipes From Cape to Cairo brought no luck, nor could I find anything in Sandra Amoako’s Akwaaba: A taste of Ghana.

After 30 minutes, I de-pressurised the cooker, and ladled a large spoonful of hot bambara into my mouth.

I could feel the blisters form on my tongue. It was excruciating. But I forged ahead. This time I employed my teeth, which have dealt with most things I’ve thrown their way.

But not this time. No sir. I might as well have bitten into a slice of Grootfontein’s Hoba Meteorite. To prevent further damage to my precious, personal eating utensils, I deposited the lot into the kitchen bin.

This time, I approached the pressure cooker with much less concern over the well-being of these rock-hard artifacts. I added fresh water and cranked up the temperature. With the cooker back to full pressure, I retired – blisters and all – to seek solace on the Internet.

Other than a video clip showing a young West African woman droning on for ten minutes about how she missed her family and how hard it is to get proper bambara nuts in the USA, there is nothing. Zippo! Zilch! Nada!

I struggled to make it through the ten minutes of watching her cook beans on a stove top. It takes four hours, she said. It is difficult to say “f&@kit” with painful pockets of water the size of 50-cent pieces wobbling on your tongue, but I did. A lot.

After another hour, I completed the ritual of de-pressurising the pot once again. This time, I carefully removed a few beans and rinsed them under cold water. Other than a wrinkled skin, there was almost no progress. More swearing with a swollen tongue. More fresh water, more heat and more pressure. Still no recipe.

I went to bed that night with hard, still inedible beans in the pot, and much turmoil in my head. I got little sleep as I continued to ponder the best way to cook the beans. I made sure I followed all the recommended steps – no salt or acid, as this toughens them. A little bi-carb of soda, which is supposed to make them softer (and help with embarrassing flatulence!).

The next morning I waited until everyone was gone. Rinsed them once again and added more fresh water. Made sure I had enough to do and more than enough to drink. I then dug in for the long haul, with every hard-assed fibre in my being. In fact, I might even have been a little happy as I listened to the whistle of the pressure cooker. Then all went quiet. Just like Gochas on a Sunday. Not even a breeze blowing.

Quietly I inspected the kitchen. The stove was still on, but there was no heat. I tried the remaining cooking tops – nothing. I would have done better trying to heat the cooker with a cigarette lighter.

After about 15 minutes of close inspection and agitated swearing – by now I had already consumed twice my daily dose of high-blood-pressure pills – I discovered that I had run out of electricity. What else on God’s beautiful earth could go wrong?

It took another hour and a half to get the beans soft, by which time I was ready to admit defeat. Is this why it is a ‘forgotten’ crop?

Eating them is a whole lot easier than cooking them. I used my bambara nuts to make lovely vegetable fritters. If there is anyone out there who knows how to cook these beans in much less than about four hours, I would be most grateful to hear from you. Honestly, I would.

Want to see more from Christie Keulder on his Food Adventures?