Botanical Garden – Nature’s miracles in the heart of Windhoek

Two small, dark-green leaves are passed from visitor to visitor. They rub them between their fingers and take a deep breath to inhale their fragrance. There’s no doubt about it. The tangy basil scent is that of bush tea, Ocimum americanum.

This aromatic herb is only one example of Namibia’s rich plant life. On the highly instructive walk through the garden spread out down a slope and across a valley, we see many of the plants we noticed on our drive through the country.

Especially conspicuous are the mountain aloe, Aloe littoralis, symbol of the City of Windhoek, which flowers in flaming orange-red in April and May; the distinctive quiver tree, Aloe dichotoma, symbol of the arid south; and the bottle tree, Pachypodium lealii, from the hilly north-western region. The San (Bushmen) used to obtain poison for their arrows from this tree. Then there is the highly poisonous candelabra euphorbia, Euphorbia virosa, also from north-western Namibia.

Rhino like to nibble on this plant, excreting the poison contained in its milky latex in an undigested form. The gemsbok horn, Sansevieria pearsonii, nicknamed ‘mother-in-law’s tongue’ due to the sharp ends of its leaves, occurs in the Waterberg and further east.

The botanical garden is undoubtedly one of Windhoek’s gems. It is in the heart of the capital, on the slope of a hill that forms a natural divide between the city centre and the suburb of Klein Windhoek. It was proclaimed a nature conservation area in 1969, and hiking trails, a system of seasonal watercourses and even a small dam were established.

But financial resources soon dried up and the garden fell into disrepair. It finally received attention again in 1990, when the National Botanical Research Institute (NBRI) moved to the site above the garden.

Since then the Botanical Garden has become an unspoilt paradise of greenery and flowers, providing sanctuary to many small creatures and birds. Wandering along the paths you can learn about plants from Namibia’s other regions, identifying them by their name tags. And in between you can rest on a bench while enjoying the peace and watching visitors to the birdbaths.

The entrance to the grounds is at the NBRI, where the herbarium houses an archival collection of Namibia’s endemic plants (about 600 species), on which work is still in progress. Since the former South West Africa did not have a herbarium until 1953, scientists, mostly from abroad, took their specimens back home with them. Many of these ‘plant documents’ are thus kept in archives in other parts of the world, especially South Africa, Britain, Germany and Switzerland. 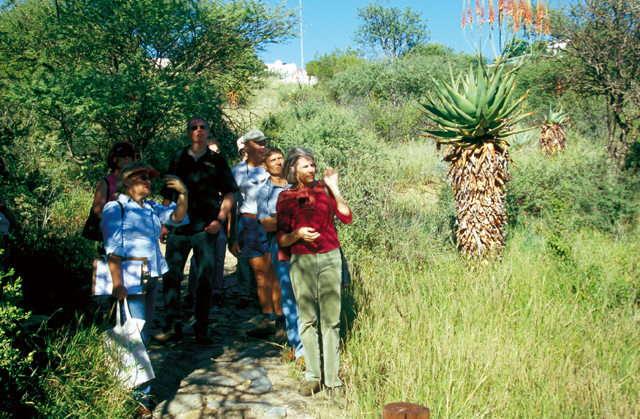 The herbarium still lacks some indigenous plant species (about 4 000 in total), even though it contains information on some 85 000 plant specimens. The large number is due to the fact that several specimens of the same species are collected to obtain as much information about it as possible. Please note that while it is legal to collect plants on your own land, for any other area you need a permit from the Nature Conservation authorities.

The NBRI also maintains an extensive seed bank in enormous freezers and has a large library. Moreover, the Institute handles and supports numerous projects, such as the cartographic recording of Namibia’s plants and the African Plant Initiative, an organisation that is setting up a data bank containing digital pictures of Africa’s plants. It provides scientists with quick and easy access to a wealth of information.

With its Plant Product Deve-lopment Department the NBRI also takes up the challenges of the industrial age. One of the scientists, in co-operation with her colleagues at the Institute, is busy with the difficult task of identifying indigenous plants and/or substances in these plants that could be suitable for commercial use, as medicinal herbs, fruit or ornamental plants. The aim is to represent Namibia’s interests, and those of its people, especially when plants are used commercially.

Examples are devil’s claw, Harpegophytum procumbens, which has been used in Germany for many years to alleviate rheumatism, and the stem succulent Hoodia gordonii, which is currently targeted by the British pharmaceutical company Phytopharm to develop as an appetite suppressant. The knowledge of the Hoodia’s medicinal properties comes from the San, and they will share in the profits made with the pharmacological products.

Visitors can find out more about the NBRI by perusing through the diagrams and exhibits the various departments use to display their projects. Staff members at the Institute are happy to show groups around when a time and date have been arranged in advance. Business hours at the NBRI and its library are from 8:00 to 13:00 and from 14:00 to 17:00 on weekdays, Tel (++264 61) 202 9111.