Gripped by a fever of exploration, Portuguese explorers sailed the oceans in small fleets of caravels in search of new worlds. With only rudimentary equipment, the small wooden boats were at the mercy of great oceans, treacherous coastlines, storms and strange new people.

Shipwrecks and scurvy were not uncommon and many sailors, once having embarked on a journey of discovery, would never see their home port again. Those who did return home after years at sea charting unknown territories, told of the lands they had visited and the people they had encountered.

On Diego Cão’s first voyage, commissioned by King João II, he sailed south along the unexplored coast of Africa for 1 200 kilometres, returning home in 1484. Barely a year later, he embarked on his second voyage of discovery, continuing to explore the West African coastline. The Portuguese explorers had a tradition of erecting padrões (crosses) along their route when they ventured ashore on new territory. On a desolate, windblown spot along the south-western coast, Diego Cão erected his last cross in 1486 at a place the Portuguese called Cabo do Padrão, today known as Cape Cross.

Diego’s journey ended at this point where his name disappears from recorded history. It is believed that he died at a mountain south-east of Cape Cross. The small fleet returned home without him. After Diego Cão, Bartolomeu Dias and Vasco de Gama continued to chart new areas and discover new sea routes.

For 400 years, the limestone cross stood on the barren desert coastline becoming weathered by the elements. It was virtually undisturbed by Europeans until 1893, when the German ship Falke stopped briefly along its route. The captain realised the value of the cross, now leaning at an angle, and took it aboard. It caused much excitement in Berlin as the fourth of Diego Cão’s crosses to be found. The German Kaiser ordered a granite replica to be erected at Cape Cross in 1895. Nearly a century later, another cross, this time made from Namib dolerite, was erected at the site by the people of Namibia paying tribute to the intrepid explorers. The two crosses are visible at the thriving colony of lively seals, as stark reminders of the men who braved the rough seas and dangers of uncharted lands.

With the German colonisation of the country, seal pelts were identified as a valued resource. Ernst Hermann, manager of the Deutsche Kolonialgesellschaft, noticed that the seals in the Lüderitz area migrated north, and he sent an Englishman, Walter Matthews, to investigate. With the scarcity of water en route, the arduous journey north was accomplished by loading water onto pack donkeys, burying water and retracing his steps to refill the containers, until he managed to reach the Omaruru River Mouth and continue on to Cape Cross. Matthews found thousands of seals. He also discovered large quantities of guano, rich seabird droppings regarded as ‘white gold’ and highly prized as fertiliser in Europe.

On Matthews’ return he formed the Damaraland Guano Company with the help of a wealthy uncle, and was granted a concession to look for guano deposits between the Omaruru and Ugab rivers and to harvest the abundance of seals at Cape Cross. Virtually everything for the new settlement had to be brought by ship from Britain, including potable water. By 1896, the bleak coastline had been transformed into a bustling operation comprising 100 men, a condensation plant and a cluster of buildings, and 5 700 000 kilograms of guano and 2 500 sealskins had been exported. The German colonial government benefited by receiving the annual concession fees, taxes on the guano and skins and custom duties.

The first railway line in the country, 21 kilometres of track, was laid at the salt pans and seal colony at Cape Cross to transport guano and seals to the settlement. A locomotive was shipped to the area for this purpose.

A small graveyard near the seal colony juts out from the surrounding sand bordered by the blue of the chilly Atlantic. Wooden crosses defy the elements and reveal the harshness of the conditions endured by the men on the isolated barren coastline without adequate supplies of fresh fruit and vegetables. The ships that carried supplies and transported the Cape Cross riches back to Europe were carriers of disease and their sailors were prone to scurvy. Without a harbour and with the strong seas and winds, several ships were wrecked along the coastline, including the Erycina in 1896, which was blown ashore by strong winds when crew members were offloading coal, and the Norwegian ship, Hendrik Ibsen. 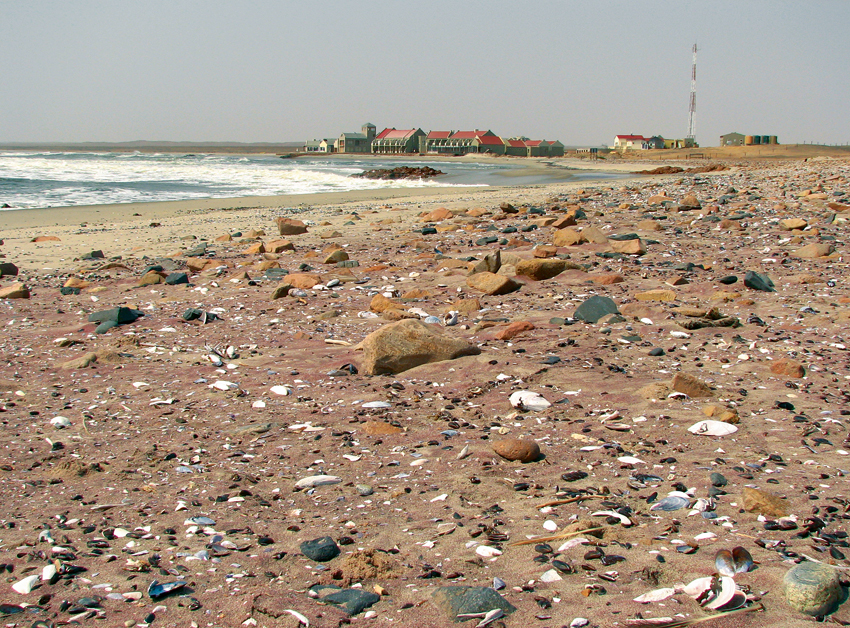 The post office of the small settlement carried post to the developing town of Swakopmund and Walvis Bay and from there to families in Europe, employing a postman to carry the postbag between the remote coastal settlements. Cape Cross is renowned for having the first postal robbery when the postman was shot at along his long route south. He abandoned his postbag and fled to Swakopmund for help.

By 1903, Cape Cross had reached the end of its road. After approximately nine years of production, the area had been stripped of guano and the seals had either fled or were proving difficult to cull. A year before the ten-year concession agreement expired, the Damaraland Guano Company, including its customs office, post office and police station, closed down. Walter Matthews, the man who had explored Cape Cross on foot from Walvis Bay, walking with local assistants and pack donkeys, died in 1899 at the Hoanib River of a fever, aged 42. The era had come to an end.

The concession to collect sealskins was passed on. By 1913, when German colonial authorities used Cape Cross as a base for a trigonometrical survey, most of the facilities had deteriorated. In 1914, the First World War touched the settlement briefly when a British naval vessel fired several shells at the buildings. The potable water that remained in the water tanks was said to have saved the lives of four South African prisoners of war who had escaped from Franzfontein, a German camp near Khorixas, in 1915. The prisoners managed to walk across the gravel plains and inhospitable shoreline to Swakopmund.

The concession was revoked after the war by the South African Government and later returned to the concession holder, who rebuilt and persevered with seal culling. In 2001, the old buildings were demolished to make way for a lodge, which stands today looking out onto the Atlantic surrounded by a handful of exclusive holiday homes.

The Cape Cross Seal Reserve was proclaimed in 1968 to protect the largest South African fur seal colony on the Southern African coastline and draws a large amount of visitors. The cacophony of seals reaches its peak in the breeding season towards the end of the year, when up to 250 000 seals congregate on the rocky outcrop.

Five hundred years after the wooden caravels bobbed on the Atlantic Ocean with their white sails emblazoned with red crosses and the subsequent rush for guano and pelts, all that remains of Cape Cross history on the windswept coastline are the two rock crosses vying for prominence and the small secluded graveyard marking time next to the sand and sea.