Conny’s Restaurant – on the road to Sossusvlei

A hidden gem on the road to nowhere

If you’ve ever been on a journey on the road that goes past Klein Aub and further into the middle of Namibia’s desolate landscapes, then you will know Conny and her charming stopover.

Conny’s Restaurant is the only ‘restaurant’ between Rehoboth and Sossusvlei and it’s a welcome rest stop from the corrugated gravel roads that take you to your destination.

Owner, Catherine van Heerden (or Conny, as she’s better known), has been behind the counter of this quaint little place since 1978.

What originally started out as a fish and chips shop for the local people, developed into the only general dealer in the area (Willow Store), and in 1987, when the copper mine at Klein Aub closed down without notice, the restaurant was all that remained of the Van Heerden’s business.

“We sold everything from a needle, to a dead policeman,” laughs Conny. 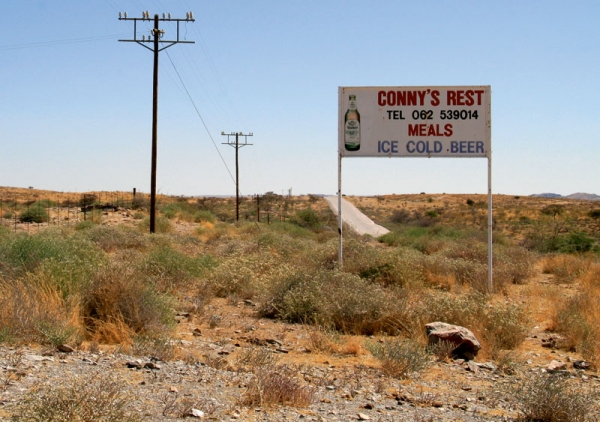 Conny and her husband started the original business all those years ago, and when her husband passed away, Conny promised that she would keep the restaurant going. It continues to be a welcome stopover for a proper cup of coffee and homemade cookies. There’s even a sign that says ‘Rocks for sale’, but according to Connie most of the rocks have long since gone.

All that remains are a couple of big rocks that act as tablecloth holders and examples of what once was. Conny’s Restaurant offers tea, coffee and cold drinks, light snacks and if you’re really hungry, she’ll throw a homemade meal together especially for you. In case of an emergency, Conny will offer you accommodation in her own home, and if your car is giving problems, it can probably be fixed by locals.

As one of the many visitors remarked, “Conny’s Restaurant is a hidden gem in a beautiful country.”

So next time you take the road, make sure to plan your journey with time for coffee and Connie’s home-made cookies.

To reach Conny’s Restaurant from the south, take the C24 that turns left just before the Baster community of Rehoboth and turn left on the MR47, which will take you straight to the small settlement of Klein Aub. The Restaurant is about two kilometres outside Klein Aub on the left-hand side (look out for the signs).