Etosha pan – the trek of the flamingos

Onyoka – a proud Namibian tradition by the sea

When reptiles shed their scales and replaced them with feathers about 200 million years ago, the forbears of flamingos rose with Archaeopterix and flew, phoenix-like, from the morasses of the Triassic era.

To survive in a pristine world of steamy swamps required evolving elongated legs to wade with and extended necks to feed on the rich nutrients that oozed from the bottom of tropical bogs. Their upside-down bills diverged from typical bird beaks, enabling them to filter-feed most efficiently, very much like their nearest relatives, the ducks. Even the double-syllabled honk-honk of flamingos aligns them closely with geese.

Imperceptibly, the huge paradises they inhabited shrank, transforming the watery expanses to isolated patches of soda lakes and saline pans where these specialists could still survive. Compounding their disadvantage in the modern world, Africa is dehydrating due to exploding human populations and their accompanying domestic stock, crop growing and boreholes, slowly but surely depleting water reserves.

There are very few places remaining where flamingos can reproduce successfully. One of them is the Etosha Pan, a vast expanse of nearly 5 000 square kilometres. These long-lived, long-distance travellers have one more feather up their wings to stave off extinction – they are able to withstand many years between breeding events, and then, when conditions are ideal, they are able to procreate explosively in mass episodes. 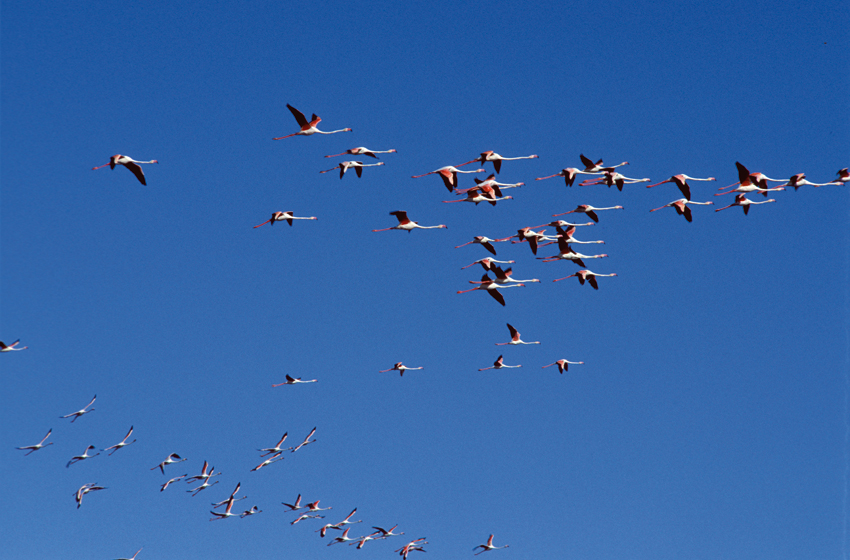 Seven such episodes have been recorded in Etosha over the past 50 years, averaging out at one every seven years. For the species to survive under these circumstances, flamingos have achieved longevity; indeed they live the longest of all African birds. Research shows that barely half of all eggs laid will result in flying flamingos (and a breeding pair lays one egg only, possibly at seven-year intervals). More mortalities will follow when fledglings disperse to distant feeding grounds across Africa. Jackals, hyaenas, lions, eagles and humans all feed on flamingos. Consequently, it may take up to 50 years for a pair to replace themselves with fertile adults.

One of these episodic events took place on the Etosha Pan in 1971 when the right amount of rain fell at the right time, attracting more than a million flamingos from distant places in Africa. Within weeks the cracked, clay surface was transformed into a vast, shallow, saline lagoon surrounded by extensive, slushy mudflats that provided a daunting barrier for would-be predators.

Bearing hues of the deepest pink, the Lesser Flamingo dominated its counterpart, the Greater Flamingo, in numbers. The latter, nevertheless, has wing feathers of the deepest crimson, contrasting sharply against its black, primary flight feathers. Flamingos favour total isolation when they breed and therefore choose to nest far into the pan, out of sight, sound and scent of predators.

Intricate ritualistic nuptial displays are essential to synchronise successful breeding. These begin before the flocks migrate to Etosha, at places like Walvis Bay lagoon. The trigger mechanism is when flamingos bunch tightly, necks raised, and begin snapping their heads sharply from side to side. As if under a hypnotic spell, the head-flagging progresses to a strutting march, culminating in a ‘wing salute’ as thousands of birds suddenly stop and extend their crimson and black wings in a spectacular blaze of colour. The scene is set and towards sunset they soar towards Etosha, forming long skeins with their slender bodies. The dazzling effect of their colours prompted author Lawrence Green to title his renowned book on the Namib coast On Wings of Fire.

Flying at night and using the stars for navigation, flocks arrive in Etosha, their instincts honed to breeding pitch. Moreover, their upside-down beaks are perfectly shaped to scoop wet clay into crude, conical mounds to receive a single egg. One month later, at hatching, the most critical phase of a chick’s life occurs. As it emerges, it cheeps repeatedly, inducing a reply from both parents. Without being aware of it, the chick and adults are establishing a vital linkage via ‘voice imprinting’, enabling them to recognise each other.

In 1971 tens of thousands of these vocal links were established, and providently so. As the chicks became mobile, water surrounding their nests evaporated to expose wet, then drying, then cracked clay. The miracle began. Urged on by their parents, who began walking towards the receding waterline, the tiny chicks followed. They moved across the dehydrating pan in ‘kindergartens’ that were thousands strong, guided by the parents, who flew food from the distant feeding grounds to the marching chicks. Finding a specific chick among the multitudes would be impossible, were it not for the magic of voice imprinting.

A feeding scene is nothing short of miraculous. Fresh from the feeding grounds, a parent bird lands at the edge of a milling mass of chirping chicks, walks into the melee of thousands of downy young, all clamouring to be fed, and begins honking. All flamingo chicks look and smell alike but, incredibly, to a parent flamingo don’t sound alike. Soon, a specific chick that chirped its emergence from the egg is found by its parent, and receives a regurgitation of the rich living soup generated in the pan. If this fantastic bond did not exist, only the biggest and strongest offspring would be fed, resulting in mass mortality of smaller chicks.

I watched these determined groups strutting tirelessly across the seemingly endless wastes of the pan, attended by their parents who flew relays of many kilometres each time they searched for food. Many chicks accumulated wet clay that dried and formed hard, crusted balls on their tiny wings and legs. Weighed down by this lethal load, they soon lagged behind the others, eventually succumbing to vultures and eagles that accompanied the ‘kindergartens’ as they moved like living carpets across the pan.

Eventually, after three weeks and a total distance of 80 kilometres, clusters of survivors reached the remaining water. About 25 000 of the 30 000 hatchlings completed this arduous trek. It may have been the first time that such a feat was witnessed by humans but, with hundreds of thousands of years of adaptation to aid them, we can only speculate on how many times flamingos and their flightless chicks have trekked across the vast expanses of the Etosha Pan.