Music in the world of birds

The magnitude of change reflected by the tracks left on Etosha’s surface during the past century is awesome. At the same time it is a solemn reminder of future trends. Can the Great White Place continue to absorb the impact of modern men and machines if this rate of increase continues? Will there come a point where the sheer quantity of visitors overtakes the quality of the experience?

The place we call Etosha has witnessed tracks and trails left by wild animals for millenniums. As Africa’s wildlife evolved, it searched for and found habitats in which to flourish. Immense migrations of hoofed animals left deep trails as they plodded across the savannah, seeking out water and the most nutritious graze and browse. The single-digit tracks of zebra and double-digit toes of antelope were soon superimposed by the pugmarks of the great cats that followed, padding after them with predatory intent.

Prints of prey and predator were accompanied by the huge, rounded and oval imprints of elephants, creating distinct pathways, cleared of stones and lined with soft carpets of half-digested dung. These heavy highways also carried the clover-leaf toe marks of lesser pachyderms, when both broad-lipped and hook-lipped rhinos snuffled and snorted their paths through thickets and clearings. A primeval pattern of passage was created by these wild wanderers, laying a network across Etosha’s frequent dryness and occasional flooding. 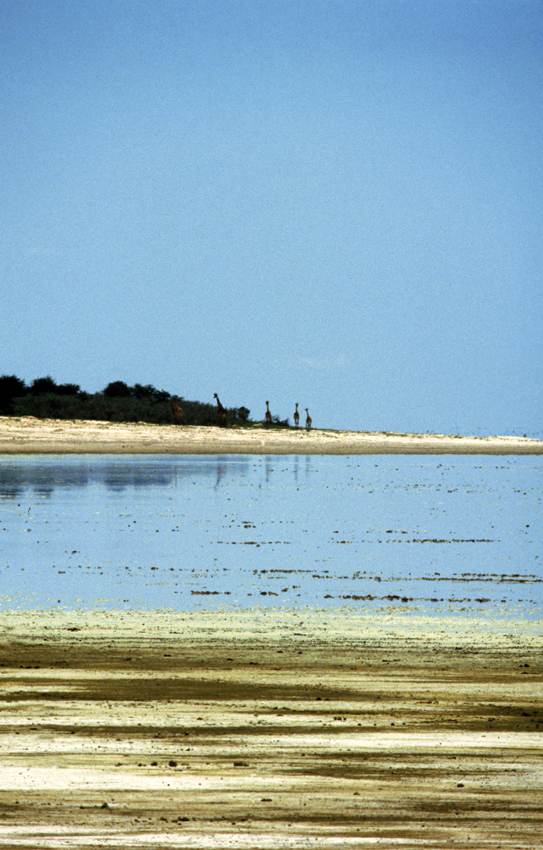 Then, tens of thousands of years ago, as if it were yesterday in relation to the timelessness of Africa, another type of footprint dusted over hoof and paw, leaving unmistakable two-legged tracks on Etosha’s powdered limestone. Heel and toe marks of hunter-gatherers, whom we refer to today as Bushmen or San, wended their way along the spider web of animal paths. These first human inhabitants were as nomadic as the game they hunted, existing in near-perfect harmony with the plants and animals on which they depended for survival. The tracks they left were as ephemeral as the windblown spoor of wildebeest and kudu. Their crude shelters of twigs, bark and grass soon dissolved back into the earth. In ecological terms they walked lightly on the land.

In keeping with Nature’s theme that change is constant, Etosha’s game trails began showing yet another type of track. Shoed horse hooves lay alongside soft-soled veld boots as early explorers hunted and traded their way across this pristine paradise. They met, interacted and sometimes clashed not only with the San but also with darker, more powerfully built Negro tribes who were wending their way southwards. The era of explorers soon passed and with it untold numbers of wildlife that had little defence against musket powder and smooth ball shot, and even less against rifled bullets. The age of the white man had dawned over Etosha, as recently as 150 years ago.

With the approach of the past century, a more sinister footprint was added to the mosaic. Heavy-booted heels thudded along the pan’s dry shoreline, accompanied by the clink of cavalry and the intermittent rattle of machine guns as they stuttered and spewed their lethal load across the plains. Both animal and human blood spilled and caked the tracks that criss-crossed Etosha. This scene was fortunately short-lived when, a mere century ago, political insight overtook military might. Strengthened by undisputed authority, the simple stroke of a pen changed Etosha from hunter’s paradise to wildlife sanctuary.

Exactly one hundred years ago, on 22 March 1907, the Governor-General of German South West Africa displayed a vision that created one of the largest conservation areas the world had yet seen. Bearing the unpretentious name of Game Reserve No 2, it followed the earlier Game Reserve No 1, which occupied a smaller area to the north-east.

With this bold proclamation, the footprints of hunters and soldiers gradually gave way to those of police, who also filled the role of honorary game wardens. No sooner had the cannons of the world’s first full-blown war fallen silent than a new type of track appeared on Etosha’s surface. Thin, rubber tyres marked the routes between Namutoni and Okaukuejo, interspersed with tracks made by the comfortable footware of early tourists as they made their way from waterhole to waterhole. The click of still-life cameras and the whirr of moving footage replaced the sharp crack of rifles.

Tourism was still in its infancy when nations paused again to witness for a second time the world at war. Etosha mostly lay fallow as humanity busied itself with inhumane and humane acts. When sanity and peace returned, they brought yet another kind of spoor to Etosha. This time it was the heavier tyre marks of lorries and railway buses that transported the first organised groups of visitors, replete with camping equipment, to marvel at the abundance of wild animals. Formal tourism had made its appearance.

Men and machines grew more sophisticated. The first stony, bone-jarring roads made way for smoother, gravelled surfaces and rigid coil springs were replaced by cushioned shock absorbers. The ratio of humans to wild animals changed from a minority to a majority as hundreds, then thousands, then tens of thousands, then hundreds of thousands of people flocked to admire one of Africa’s great wildlife spectacles.

The magnitude of change reflected by hoof, paw, feet and wheel tracks left on Etosha’s face over the past century is awesome. At the same time it is a solemn reminder of future trends. Can the Great White Place continue to absorb the impacts of modern man and machine if this rate of increase continues? Will there come a point where the sheer quantity of visitors overtakes the quality of the experience?

For the few of us who are privileged to have witnessed this proud remnant of Africa as it once was, there is a lesson to be learnt. We must be mindful of the fact that, as a unique species, we have changed the face of Etosha in the space of a mere 100 years more than our ancestors were capable of during the preceding 600 000 years when they first stood upright. Humans are the only species known to show an ever-increasing and exponential growth in numbers. From fewer than 10 million hunter-gathers who roamed the earth in prehistoric times, we recently passed the 6 500 million mark in a wave of population pressure that threatens our very existence.

What about footprints of the future? Can we carry Etosha through its second century without the heavy human footstep obliterating it completely? To achieve this we will have to learn to walk lightly on the land, like the Bushmen.