Harnas – a sanctuary for destitute animals

A rising red moon hangs over the horizon as we arrive at Harnas. For ancient inhabitants of these areas, such a sight might have been ominous. Today it is spectacular to behold.

At the lapa a boisterous crowd of working visitors enjoy their dinner with guests who have come for the weekend. It consists of a shrimp entrée, a T-bone steak with veggies as main course and a delicious melt-in-the-mouth peppermint crisp tart for dessert. And now it is time for bed, as many activities lie ahead for the next day.

Set apart from the main lodge, three luxury cottages are the latest addition to the accommodation offered at Harnas. Together with three igloo bungalows, Harnas can sleep 16 guests a night. The simplicity of the new luxury cottages belies the tasteful interiors and creature comforts. To the one side is a small braai area, a private lapa that blends in with the pristine African landscape surrounding you.

A surrealistic pink landscape awaits the early riser. As the sun emerges reluctantly above the horizon, a herd of springbok grazes in front of the cottage. It is a spectacle to cherish while lying in your bed.

Caring for the vulnerable

After breakfast the guests climb onto a truck with comfortable seating and a canopy roof. At the back of the truck is a gruesome (for humans) feast for the animals.

Pap (porridge) mixed with vegetables and fruit for the baboons and apes, and horsemeat for the predators. Our guide for the day is the knowledgeable Gino Mokhe. His love for wild animals attracted him to Harnas six years ago. Here he has the opportunity to get close and personal with nature and share his passion with the many visitors who come to Harnas every year.

Harnas is home to 16 lion, 25 cheetah, eight leopard, 82 baboon and 30 wild dog. Wild dogs are of the most endangered species in Namibia, and Harnas is home to the biggest pack in the country.

The project to take care of vulnerable animals started at Harnas in 1978 when the Van der Merwe family registered the farm as a reserve. Their objective was to take in animals that were destitute and problematical; mutilated because they’d been caught in traps; orphaned because their parents had been killed; or had been pets which had outgrown their cute and relatively safe ages and become a burden to their owners.

These animals are kept in enclosures, as they have lost the ability to hunt for themselves and need to be fed every day.

Old horses and donkeys are bought from farmers in the vicinity, slaughtered and fed to the predators. The cost of feeding the animals at Harnas runs into N$250 000 a year. 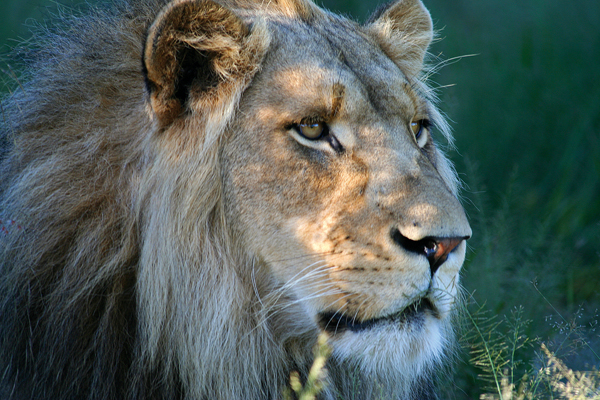 An agreement was reached between Harnas and the Namibian Government that each animal on the farm should be registered and that each predator in captivity should have at least one hectare of land to roam on.

The menagerie of predators at Harnas started in 1988 when the Van der Merwe family bought four male and two female lions from a nature reserve in South Africa when the lions could no longer be taken care of. These lions bred and 13 cubs were born, of which two survive to this day. Initially it was planned to repatriate the offspring to a game reserve in South Africa.

It was discovered, however, that the male lion, Sam, was infected with the rare feline aids virus. It’s not sure how he became infected, but the disease prevented his repatriation. Today Sam is 11 and-a-half years old, and still going strong. Had he been left in the wild, he would have died a long time ago.

Another saved lion is Kublai. He was born at Harnas and is the offspring of the 18-and-a-half-year-old Sara, one of the original group. When Kublai contracted a kidney infection, the veterinarian wanted to put him down. However, the Van der Merwe family interceded and Kublai was operated on. He now has only half a kidney, is not accepted by the other lions and is kept in his own camp where the Harnas family hopes to see him live to a ripe old age.

The owners of Harnas do not only care for their animals. They have reached out to the local population by establishing and managing a full-time clinic close to the farm at Epukiro. A nurse tends to the day-to-day needs of the mainly San and Herero communities.

A medical doctor from Windhoek visits the clinic once a month to take care of more serious cases. If the need arises, Harnas provides transport to Windhoek where patients can be hospitalised or receive specialist treatment.

Harnas also boasts a celebrity as patron, none other than Angelina Jolie, who has visited Harnas every time she’s been in Namibia. In 1997 the Harnas Trust was registered in Namibia and in 2000 it was also registered in Germany.

Harnas is situated in the eastern central part of Namibia, 98 km from Gobabis and 200 kilometres from Windhoek.