Crater with a difference – Messum crater

Counting your chickens before they are hatched?

Namibia is home to a number of geological wonders, and include ancient meteorite’s, magma formations and rock formations.

This massive, almost rectangular block of iron discovered near Grootfontein in 1920 is by far the largest intact meteorite known on earth. It is also the largest, known block of natural iron, being of the rare type called nickeliferous ataxite, composed entirely of metal – about 85% iron and 15% nickel, with traces of cobalt and other elements. Its shape is also very unusual, being like a huge ‘cake’ – three metres square and approximately one metre thick, and weighing 65 tonnes.

Since much of the object must have burned up on entry into the earth’s atmosphere, the original size must have been impressive indeed. There are many other puzzling features of the meteorite, notably that there is no sign of an impact crater, which could only be explained by the object impacting the earth at a very low angle, and bouncing like a ball before reaching its final resting place, which is estimated to have been about 80 000 years ago (from the surface weathering of the iron). Prior to that, the meteorite had been travelling through space for upwards of 100 million years.

The meteorite in former times suffered vandalism (perhaps losing half a tonne of its mass) from mentally challenged individuals cutting pieces off with hacksaws or cutting torches. To preserve it, the whole area was made secure by the Rössing Foundation in 1988, and the unique object now receives thousands of visitors annually.

West of the main B1 road between Mariental and Keetmanshoop, you can see in the distance what looks like a huge crater of an extinct volcano. This is Brukkaros. But it is a geological illusion – it was never a volcano in the true sense (there are no true volcanoes in Namibia, active or extinct). What happened was that magma (molten rock) intruded into local sedimentary rocks and encountered groundwater, which was immediately converted into steam. The surface rocks bulged upwards into a dome under the huge pressure, and ultimately there was an explosion like that of a giant steam boiler blowing off the top of the dome, and the landscape later becoming weathered into a crater-like form.

The ‘crater’ yielded a fossil of one of the oldest angiosperm (flowering plants) ever found, a flower with five petals, dating back 75 millions years!

Formerly, the site was used by the American Smithsonian Institute to measure solar radiation, due to the clarity of the air in the region.

Mukurob – the Finger of God 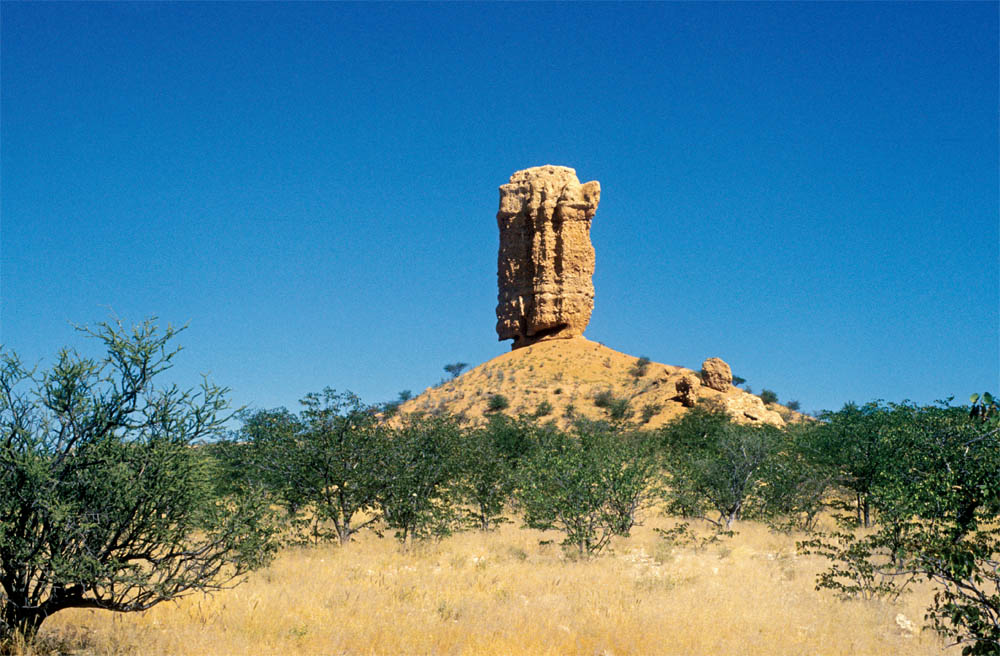 Once the de facto emblem of Namibia (like the Eiffel Tower for France), Mukurob was a unique geological formation in southern Namibia, consisting of a huge sandstone block some 12 metres tall, widest at the top, standing on an approximately pyramidal base some 20 metres high. The fascinating feature was the narrow neck or collar, a slim ring of rock only a metre wide, which supported the block on top of the base, looking like some surreal Magritte-like painting. The block resembled a chubby giant finger, and was dubbed the Finger of God.

Though it must have been standing in place for thousands of years, the result of a freak pattern of weathering and erosion, it fell down during the night of 7 December 1988. Of course, there were no smartphones or CCTV around to record what must have been a stunning event. The collapse was viewed as greatly significant, as it occurred shortly before Namibia’s independence. It was heralded as symbolising the collapse of the apartheid rule – or, conversely, as a portent of pending disaster. In fact, the ‘finger’ probably collapsed due to seismic vibration from the huge earthquake in the Soviet Union happening at the same time – an impressive example of globalisation in the geological context.

While the name Mukurob comes from the Nama language, it does not mean ‘Finger of God’, but rather: ‘There, do you see that?’

Recently, there was a strange proposal from a local town councillor to re-create Mukurob, full size in fibre-glass, but, perhaps predictably, nothing came of the idea.

This article appeared in the February edition of FLAMINGO Magazine.