Conflict and Costume – a documentary of Herero dress

The unruly south-westerly wind died down.

“We checked our musical instruments one final time on the stage of the rambling recreation hall. The sound rang through the air and the hall echoed with its century-old space, and then there was silence. It was time to start. It was time to serenade ghosts.”

While Kolmanskop might not be everyone’s choice of venue to record a music album, for Dan Shout being recorded here was the achievement of a long-time dream.

Dan grew up in the diamond-mining town of Oranjemund, in the south-western corner of Namibia, where his father worked as a security manager for the Sperrgebiet, the once-forbidden diamond-mining territory. His childhood was spent playing on sand dunes amidst the old ghost towns.

His life was steeped not only in the Namib Desert and diamond mining history but also in coming from a family that was passionate about music. He was born and baptised into music long before he even picked up his first recorder at school.

His father, a member of a local rock band, had inadvertently cast his spell on his son.

Dan grew up to the beat of Led Zeppelin, the Beatles and Moody Blues, with his mother’s interest in theatrical music balancing the scales.

Dan would pick up his dad’s guitar and strum a few chords, his dad giving him some hurried guidance before dashing off to work. His parents eventually told him that if he wanted to play music, he should learn do it properly, and sent him off for classical recorder lessons.

These led him to playing the clarinet and eventually, his chosen instrument, the saxophone. He has never looked back since, or returned to playing the guitar.

It would take many more years of practice and gaining experience before he met up with the rest of the SHOUT band members, and for the group to record its album in the desert sands.

Like all children from the small mining town, Dan went to boarding school when he reached high-school age. He chose SACS (South African College High School) in Newlands Cape Town, a school known for its excellence in musical tuition, and situated close to where his grandparents lived.

He soon joined the concert and marching bands, and his mother bought him his first saxophone, enabling him to play in the jazz band.

He matriculated at SACS and went on to study music at the University of Cape Town (UCT). After a year of studying classical clarinet, he switched to – and fell hopelessly in love with – jazz.

He began to play in UCT ensembles, and with house DJs and artists around the city. After graduation he taught full-time for a year and a half, and then returned to complete his masters’ degree in jazz performance. 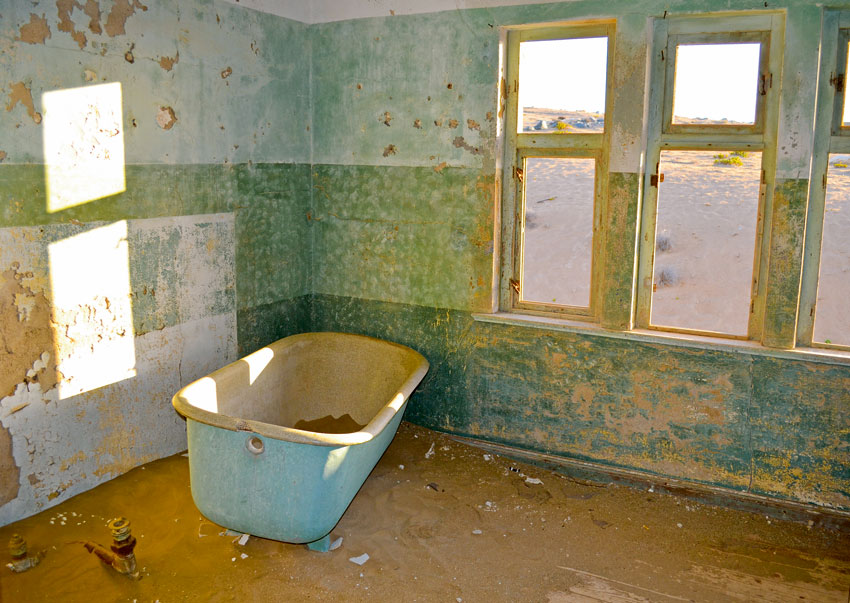 It was only a few weeks after graduation that he received a telephone cthe all to audition for the band of well-known South African artist, Johnny Clegg. This was seven years ago and Dan has since catapulted himself into the international arena.

His week is now jam-packed. He divides his time between playing a variety of music for different bands, from Johnny Clegg’s Zulu rock ‘n roll to swing, acid jazz and original jazz; running the Shout Music Company, an agency arranging music for weddings, events and restaurants; and teaching and lecturing at UCT. And he makes time, importantly, for his dreams.

They took to the stage in the abandoned town hall of Kolmanskop to play their repertoire of (mostly) original jazz-fusion tunes. Inspired by the extraordinary venue, they performed numbers arranged by Dan, with names such as Bogenfels, Strandwolf and Cops ‘n Robbers evocative of the surrounding Namib Desert, its desolate coastline and its mining history.

According to Dan, Cops ‘n Robbers is about ‘the 24-hour 365-day cat-and-mouse game that takes place in the big sand pit of the Sperrgebiet between the people trying to steal diamonds and those trying to stop them’.

In Bogenfels, the name of the striking rock arch on the coast, they recreate the sounds of the ghost town at night, while in Strandwolf (translated from the Afrikaans word meaning ‘beach wolf’), they convey the life of the resilient desert-dwelling brown hyaena that survives in the adverse conditions of the Namib Desert.

When asked about the kind of music contained in the album, Dan tries to define it as jazz-fusion, but shies away from the 80s idea of jazz-fusion with synthesisers and electric guitars.

“It has evolved a lot since then,” says Dan. He adds that it is fused with music from all over the world – from North Africa and South America to Australia. And although he draws influences from reggae, heavy metal, jazz and African music, it’s always his aim to be original.

Dan says philosophically that while we spend most of our time when we’re growing up trying to be like everyone else, there comes a time to express yourself by finding your own voice, which in his case was his own style of music.

For a Namibian west-coast boy, this was going back to the part of the world where he grew up, surrounded by and loving the Namib Desert. In a sense this half rock-‘n-roll, reggae, jazzy music, influenced by brown hyaenas, diamond thieves, ghost towns and shipwrecks, could justifiably be called Namib jazz.

Combining dreams, love and music in the strangest and most appropriate of venues – the deserted diamond-mining town of Kolmanskop – the SHOUT band members lifted up their instruments and played their desert repertoire. They played through the night, through the twilight hours and into the dawn, entertaining future album listeners – and… serenading ghosts.