Namibia Craft Centre: Out of Katutura

Foto Namibia – a focus on the country

Overcoming challenging hurdles in life through African-inspired arts and crafts is what the Out of Katutura stall at the Namibia Craft Centre (NCC) is all about. 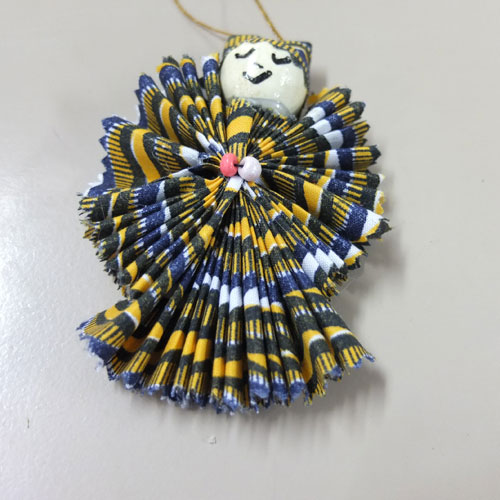 All 16 women responsible for the crafts on sale at the ten-square-metre stall hail from Katutura, from impoverished families for whom every cent counts. By seizing the opportunity to learn and then creating an array of products by hand, they have managed to carve out a living and look after their families at the same time.

Sonia Noirfalise-Corsini of the Gondwana Collection Namibia is the woman who brought this group of talented women together and has helped them market and sell their wares for more than 10 years. Sonia plays an instrumental role in mentoring the stall owners, sourcing new ideas, searching for financial assistance and, above all, boosting the confidence and passion of the women in what they do.

The Out of Katutura stall hosts three different micro-enterprises, all of which are run by women whose income from their work is vital for themselves as well as for the well-being of their families.

Five years ago, the Out of Katutura stall was launched as a vehicle for selling dolls made by the women of the Matukondjo Dolls Project, founded in 2003 by a former kindergarten teacher who taught a group of eight women how to produce dolls fashioned according to the Waldorf anthroposophical model, ensuring 100% child-friendly dolls.

The eight founding members are still the primary producers of the dolls. They have created a range of dolls, including the Big Mama Doll, a Sister Baby Doll and a Simple Doll Dress. Over time, the women began introducing their own personal touches to the dolls by creating tiny baby dolls and adding glamour and other interesting touches to the series, such as earrings, necklaces and their own personal choices of fabrics, hats and hairdos. And a smile, delicately sewn onto the doll’s faces!

Meriam Heingura, a founding member of the project, explains that she produces around 20 dolls a month, which are sold at various outlets, including the NCC. Ten years down the road she remains enthusiastic and passionate about her craft and emphasises that the project has given her the means to care for her family.

Her colleague, Dorothea Hamunyela, feels the same way. Dorothea relates that since she began making the dolls in 2002, she’s been able to provide crucial support to her family in terms of food, school fees and other necessities.

Both ladies say the work elicits continual creative thinking, as new ideas are needed to keep the series fresh and modern.

The doll makers each own a sewing machine and support, directly and indirectly, an estimated 42 fellow Namibians.

Kornelia Shaulwa’s trademark product is a handbag fashioned out of old vinyl records.  With this item she has created a niche market in Italy and in Namibia, and has received thousands of old vinyl records from local broadcasting companies to use in her craft making. With two other women, Kornelia is part of the Iyaloo Sewing Project, an endeavour that was launched in 2006.

Kornelia was taught the craft of sewing by a former employer, and has since become an expert at what she does, producing an array of beautifully handcrafted articles in addition to the quirky handbags. These range from duvet covers, pillowcases, baby blankets and quilts to animal toys and any other item that can be created with a needle and thread.

The Iyaloo Project owns the exclusive rights to a 3-D animal toy design, given to them by a fan who was impressed by the skills of the women. Many of the needlework items are fashioned using Shweshwe fabric – a high-quality cloth that has gained popularity over the past few years.

Iyaloo became part of the Out of Katutura stall in 2010, from where these delicate and African-themed items have found a local and international market.

The project is also supported locally by the Gondwana Collection, whose accommodation establishments have been using bedding, curtains and other items produced by the Iyaloo Sewing Project in their furnishing.

Kornelia has mastered her craft to such an extent that she has been able to teach several women the skills needed to make the Iyaloo products. She says the project supports women who live with HIV, thereby also helping to support their families.

Pretty as well as useful, environmentally friendly and 100% Namibian, the soaps created by the women of the Katutura Soap Project are the perfect gift for a loved one. Wrapped in recycled plastic, and finished off with leftover ribbons supplied by their colleagues at the Iyaloo Sewing Project, these cleansing products are clearly made with passion.

The Katutura Soap Project was launched in 2009 as an empowerment scheme. Funded initially by the Finnish Embassy, the project has had a life-defining impact on the three women involved. The soaps are made from scratch, either by mixing only caustic soda with olive oil (sourced exclusively from Namibia), or by also adding mahangu flour to provide an extra scrub.

Emilia Handumbo has been involved in the project since 2009. She finds that the art of soap making provides a creative outlet and has shaped her life in a positive way.

She explains that the soap makers cater for a variety of soapy needs. These include small soaps perfect for lodges, guesthouses and hotels, and decorative soaps shaped like flowers, hearts, butterflies and whatever other moulds the women can lay their hands on. The soaps are presented in gift boxes, making them ideal as ready-made goodies to give to friends and family.

Christofine Johannes has been involved in the soap project since early in 2013. She says she’s proud of the work she does, as it showcases the ability of Namibian women to make their ‘own things’.

“Besides,” says Christofine, “The project is helping women such as myself to participate in the economy, and what’s more, to expand our knowledge and skills.”

Vist the Namibia Craft Centre where the Out of Katutura stall is situated on the Hilde List Loft.