Simon, the Nomadic Writer is on a truly unique journey, which includes a system of bartering in exchange for a global adventure of note (he’s not that into money). This is his take on his last Namibian adventure, before he crossed the border. See below for links to more of his Namibian adventures. 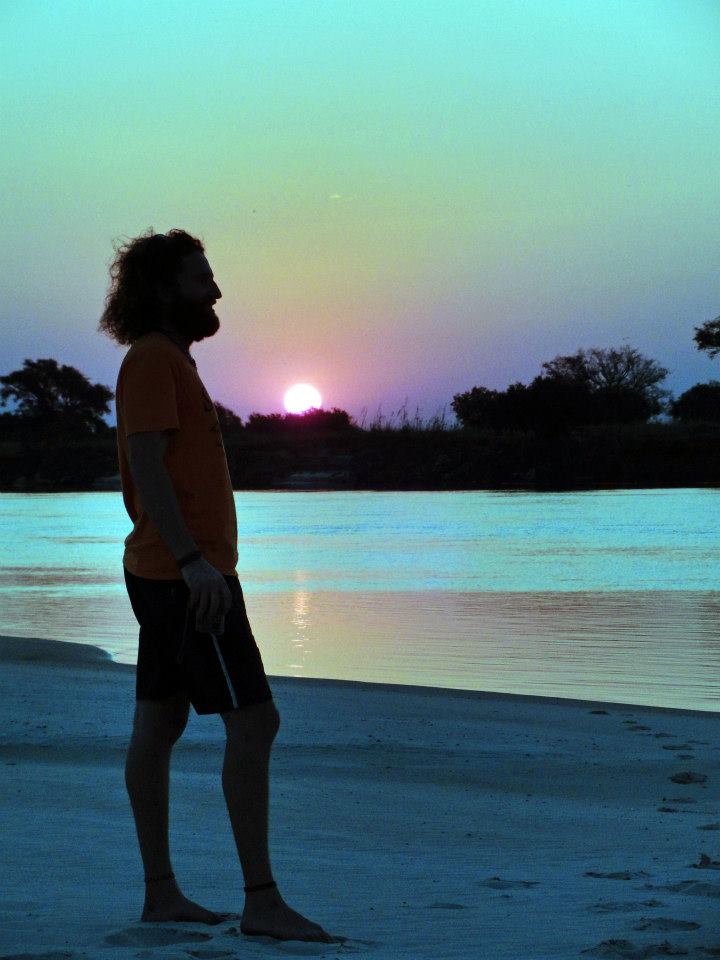 “Do you see him?” Curt asked as he slowly pushed the throttle forward, ever-so slightly.

“No,” I answered, scanning the water.

We were on a sunset cruise that an American couple had booked. They were absorbed in their own chit-chat and so had little clue as to the danger we were facing – a male hippopotamus stalking the boat.

“Argh! There it is!” Curt threw the throttle forward and launched the boat, momentarily converting it to a hovercraft. I grabbed on to a railing as we practically skimmed the surface of the Zambezi River.

“He just popped up not 2 meters from the motor!” Curt yelled in excitement.

Hippos are one of the most dangerous animals to humans on the planet. Other than mosquitoes, it kills more people annually than any other animal in Africa. And it’s not even a carnivore (although its canines may fool you).

The word ‘hippopotamus’ is ancient Greek meaning ‘River Horse’. Their closest relatives are cetaceans from which they developed about 55 million years ago. And after the elephant and rhino, are the third largest land mammals.

On average they weigh anywhere between 1.3 – 1.5 tons and, although they don’t look like running is part of their vocabulary, can easily reach 30 K’s an hour for short bursts – enough to outrun a human.

They are highly aggressive and unpredictable, territorial (only in water) and, like Polish mothers, are extremely protective of their brood. And although they spend most of their lives in water they have the swimming ability of a drowning shark. They usually sink to the bottom of the river bed where they execute porpoise-like leaps to move. They can stay underwater for almost an hour. They lack the ability to jump but can climb steep banks.

Zambezi river life. Despite the dangers of hippos and crocodiles, the local people have adapted well to navigating the river skillfully.

And one of these was chasing us in the Zambezi River.

Working at the Caprivi Houseboat Safari Lodge has its perks. For one, it’s based right on the banks of the Zambezi River, the fourth longest river in Africa (after the Congo, Niger and the Nile). And, as the name suggests, I get to go on boat trips up and down the longest east-flowing river on the continent.

Sunset cruises are my favourite. I’ve spotted hippos, crocodiles, frogs, lizards, chameleons, birds such as white-chested bee-eaters, herons, thickets, kingfishers, the mighty Fish Eagle (Namibia’s national bird), cormorants, storks and one of the rarest sights on the Zambezi – a flock of pelicans.

Last week I was asked to clear out a wheelie bin full of canvas material. As soon as I opened the lid it screamed ‘Snake territory!’

And it wasn’t long before I called out to, “Curt!”

“What?” he yelled back from the office.

He had shown me pictures of him handling deadly puff adders so I figured he could take care of whatever the one staring at me was.

He came around, had a look and picked up the small, greenish snake.

“So it’s not dangerous?” I assumed, watching it flicker its black tongue, tasting the air.

“Nope,” he handed it over to me. “You can go release it over in the bushes.”

I took hold of the reptile and walked across the property; the locals who worked at the lodge are terrified of snakes and jumped at the sight of the 30 centimetres of scales wrapped around my wrist. After releasing it into the bushes, I returned to the bin.

I moved a fold of carpeting and found myself calling yet again, to, “Curt!”

“What?” he yelled back from the office.

Spotted Bush snake with thorn stucks in its side.

I stared at the meter long spotted bush snake that wasn’t phased by my discovering it. I took a closer look at something that appeared to be lodged in its side.

Curt came jogging over. “I think it’s injured,” I said, pointing at the injury.

He recognised it as the same snake that, “Ninja was talking about and hadn’t seen in a while” (Ninja is one of the workers).

“Sure,” Curt whipped out his multi-tool Leatherman. “Just hold him behind his head.”

Spotted Bush snake with thorn stuck in its side. Injury being attended too. 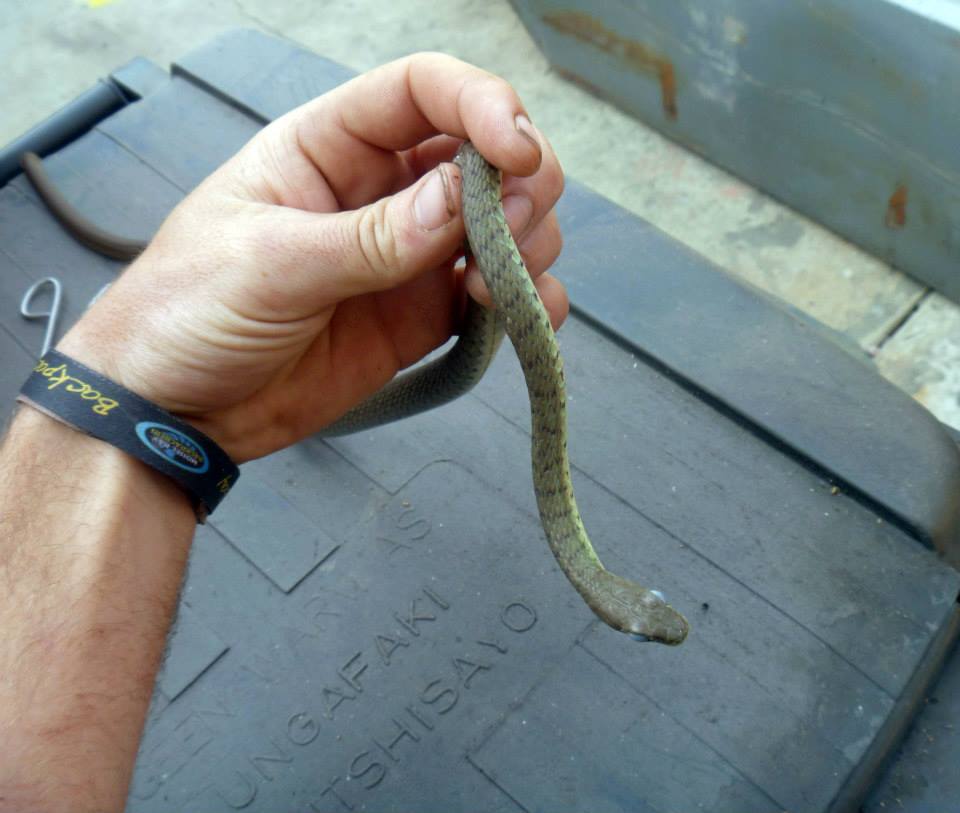 We flipped the lid of the wheelie, converting it to an improvised operating table. As Curt cut out the thorn the snake’s mouth gaped open. Once Curt completely pulled out the intrusive obstacle the snake appeared to be grateful and even slid up Curt’s arm where it tapped him on the chest, as though hugging him in thanks.

“I’ll go put him on the roof so he can recover,” he said as he left me to continue to sort out the canvases.

I was expecting a spitting cobra to be waiting at the bottom but all I got was a harmless (yet, fear-embedding) flat spider, a few wasps nests and a pile of rubbish.

The next day I headed out with Daniel, one of the guides, on a fishing trip with a Dutch family.

“I need you to grab the reeds when I get up close so we can tie the boat,” he instructed. “Just be careful, they have small thorns.”

I grabbed the reeds by the rapids, under the bridge that connects between Namibia and Zambia, and quickly retracted my hand.

“Small and sharp, geez, mate, no gloves?” I attempted to hold onto the reeds where I could feel less of the thorns. Daniel, laughing, came up to help me, grabbing them as though they were cotton.

Crocodile. A regular sight along the Zambezi river.

Animal next to an African skimmer egg. 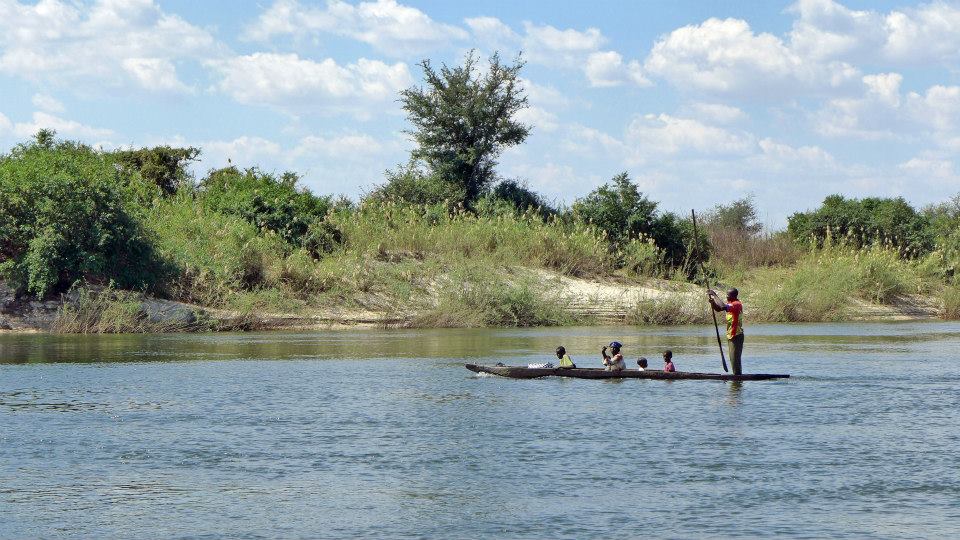 We were soon casting lines. His lure had barely hit the water when he reeled in 1.5 kilo tiger fish (there have been reports of a 13 kilo specimen but the average weight is about 5 kilos). It looks nothing like a tiger but is named so for its ferociousness and extremely sharp teeth (kinda like an African equivalent of a piranha – just bigger).

It’s also a game fish so it’s all catch and release in the Caprivi. And it’s very bony,” he answered my question of its edibility.

The Zambezi River travels about 3,540 K’s east through six countries (beginning in Zambia) where it meets the Indian Ocean (it is also home to the famous Victoria Falls of which I will be seeing in a few weeks).

It’s the natural border between Namibia and Zambia and further down it borders Zimbabwe and Botswana. There are white, sandy beaches scattered along the banks that have what’s locally called, ‘Squeaky Sand.’

“The grain is so fine that when it rubs against each other, the sand squeaks,” explained Curt.

Campsite next to the river.

My DJ friends would love this. It was like scratching a record.

On a different trip with Daniel and some guests we were chugging downriver looking for crocodiles.

“There’s a 9 meter croc that usually sits on the peninsula of Hippo Island,” he mentioned it as though a 9 meter croc was something you see every day.

I was focusing all my concentration (which is a real rarity for me) on the banks, keeping an eye out for these dinosaurs that haven’t changed much for about 200 million years when I noticed a log on the beach.

“Nope, that’s a 4-meter croc,” and he quietly guided the boat over to the banks.

I didn’t have to wait for the log to move to realise he was right. Once someone says ‘croc’ the shape becomes a croc. Except this was really a croc. A yellow underbelly with a brackish green top, emotionless eyes watching us and as soon as we were too close it leaped into the water and disappeared without a ripple.

This was the real deal, I thought.

I had spent two months in Darwin this time last year fishing for a boat to Indonesia. Darwin is in the Top End of Australia, the capital of the Northern Territory. It’s the kind of city where on the second page of the local newspaper they have a croc-count of crocodiles caught and removed from swimming holes.

But I never saw one (except for the 5.5 meter Sweetheart in the Darwin Museum).

That night I struggled to sleep. Not from the excitement of the past days events, the majestic sunsets, the emergency field operation to save a bush snake, the mosquitoes (that should have me worried as I was in a high-risk malaria zone – during the wet season) or being chased by one of Africa’s most dangerous animals.

Life along the Zambezi river.

It was because of Africa’s most dangerous animals that decided to set up camp in the middle of the river opposite the lodge and toot their horns all night.

Hippos sound like a cow with bad sinuses and they go for most of the night.

But with the wet season approaching (the Zambezi River rises 6 meters due to the floods), the hippos have started to move down river, allowing me some peaceful night’s sleep.

For more info and to book, check out their website: