Deprecated: wpcf7_add_shortcode is deprecated since Contact Form 7 version 4.6! Use wpcf7_add_form_tag instead. in /home/travelnewsnamibi/public_html/wp-content/plugins/contact-form-7/includes/functions.php on line 540
 Namibia - one of the most compelling stories in tourism today - Travel News Namibia

Namibia – one of the most compelling stories in tourism today

Shannon Stowell, President of the Adventure Travel Tourism Association (ATTA), may spend around 140 days a year on the road, but just 12 days in Namibia was long enough for him to be overwhelmed by the diversity of the country and the friendliness of the people, and to begin to absorb what he describes as ‘one of the most compelling stories in tourism today’.

“I wanted to be surprised by Namibia. To arrive here without any expectations and just experience the country,” said Stowell. “I found Namibians to be very friendly. And there was a noticeable lack of racial tension, something I’ve experienced in other parts of the world, so this was a pleasant surprise.”

Even those who arrive here without expectations cannot help but visualise Namibia as a red country – red sand dunes, red sunsets and red ochre on the skins of indigenous pastoralists. So Stowell’s next surprise was the colour green.

In the Caprivi, green dominates. Trees, papyrus, lily pods – all are green. Even the intense blue of the sky cannot compete. The blue reflected in the rivers also battles for dominance, but doesn’t have a chance. Green is the colour of the Caprivi.

Stowell, who spent his childhood fishing in the rivers of Colorado, went tigerfishing in the Caprivi, where he crossed swords with one of Africa’s fiercest predators. 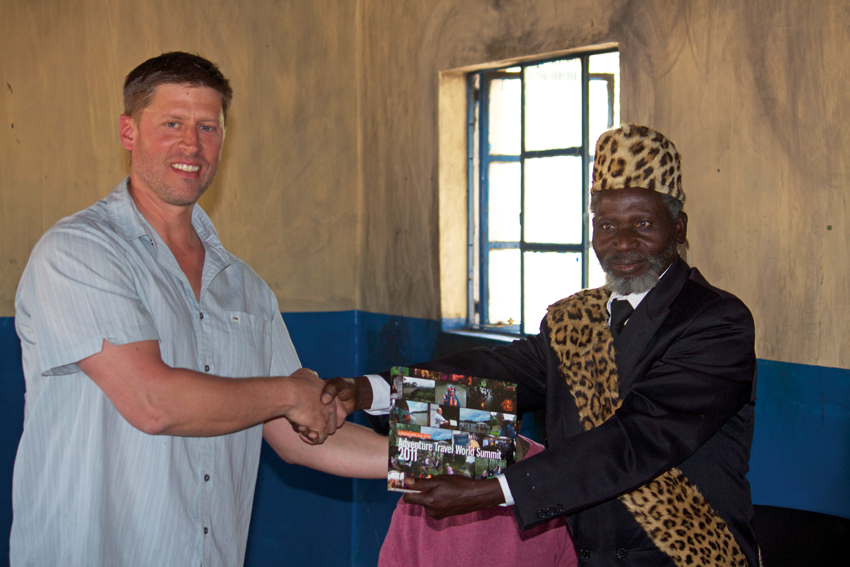 Stowell and a Caprivian chief

He saw breeding herds of elephant crossing the rivers that make up the mosaic of KaZa, the Kavango-Zambezi Transfrontier Conservation Area – the world’s largest international conservation area – and was humbled by the generosity of the local people, who shared their stories of life in the wild and the phenomenon that is Namibia’s conservancy movement.

Before independence in 1990, the Namibian community-based conservation programme started on the ground, when local chiefs in the north-west appointed community game guards to protect the last of the wildlife following years of poaching by apartheid government officials, the military, and local people hunting for meat.

Stowell and a Nama lady

After independence, visionary conservationists within the Ministry of Environment and Tourism gave the work in the field a legal basis. Policy changes enabled rural communities to benefit from wildlife by forming conservancies. Today, there are 76 communal conservancies in Namibia, covering almost 19% of the country and embracing one in four rural Namibians.

“Those evenings around the fire in the Caprivi, when conservancy members told their stories and laughed at each other’s accounts, gave me a real insight into Namibia. They reflected an authentic human connection,” said Stowell.

This authenticity of spirit and place is something that Namibia has in abundance, but it is also something that can be overexploited. “I believe that Namibia, and a few other places around the world, need to resist mass tourism, value their product, and retain an aura of exclusivity; not exclusivity in a sense of elitism, but in the sense that we know the importance of what we have, and protect it fiercely.”

“Moving on to Damaraland, where I gained a different sense of Namibia, the landscape, the incredible diversity of biomes, further emphasised the fact that Namibia is doing something very right.”

“I love the concept of joint-venture tourism and partnerships between communal conservancies and the private sector. It is one of the most compelling stories in tourism today. And while the concept is still being explored in different places around the globe, it has become the standard in Namibia.”

“I found that while conservancy members had a range of understanding of the importance of tourism and the challenges faced by lodge owners in today’s economic environment, they expressed their concerns to each other. This was real life, real tensions and real dialogue. This is how you get to the point where you can begin to work through it.”

Forty-two per cent of Namibia’s land is under conservation management. There is no other country in the world that can boast such a high percentage.

“Namibia’s model of conservancies, joint-venture partnerships and conservation is something we should show off. It’s a story that should be told. I had heard the discussions and watched the films, but still didn’t get it until I came and saw it myself.”

“ATTA would love to push that out to other destinations, and every destination has some opportunity to do this. It’s more a question of political will, and again Namibia is exceptional in this regard.“

Walking through a Namibian village

Stowell arrived in Namibia in late May as the guest of Namibia’s Minister of Environment and Tourism, Netumbo Nandi-Ndaitwah.

It was a trip that began with hopping into a six-seater plane flown by Willem de Wet – a well-known personality in Namibia’s tourism sector – and flying to Caprivi, where members of the Integrated Nature Conservation and Rural Development (IRDNC) staff and World Wildlife Fund met him.

Next stop was Damaraland and the coast, where the dunes were so tempting that Stowell and his friends couldn’t resist tumbling down them, and then on to Windhoek. Here – at the Namibia Tourism Expo – the tourism industry embraced what ATTA was doing, through Stowell, at singing contests, dances, and a few very late nights.