When you cross the bridge between South Africa and Namibia above the rippling brown waters of the Orange River the landscape opens up and the climate changes as if nature is acknowledging the demarcated border post between the two countries.

As you enter Namibia’s Karas Region, large grassy vistas extend around you, edged here and there by distant purple mountain ranges, and the road bisects the land with a determined slash of tar.

It’s easy to speed along towards the Namibian capital as your speedometer clicks away the kilometres, and you start looking forward to that Wimpy burger at the Keetmans Engen Garage.

In the blur of landscape you can discern farm stalls and guest farms, the latter with gift shops that offer interesting purchases and friendly encounters, and where walks down memory lane provide a different and enjoyable version of the south.

You may veer off from the main road before Grünau as signboards to the Fish River Canyon beckon, offering the excitement of a visit to the second-largest canyon in the world.

Or you can stop to fill up and have a bite at Grünau’s petrol station. From here on, keep your eyes open for the guest farms signposted on either side of the B1 as it passes through the wide-open landscape and farmlands of southern Namibia.

At Skillies Farm Stall and the Padstal you can buy biltong – game and beef, chilli bites and ice-cold drinks – and if you’re tempted by the beauty of semi-precious stones and southern hospitality, drop in at the White House where Dolf and Kinna de Wet offer accommodation in the century-old White House and sell rough-and-tumbled rose quartz known for its calming effect, as well as a selection of jewellery made by Kinna. 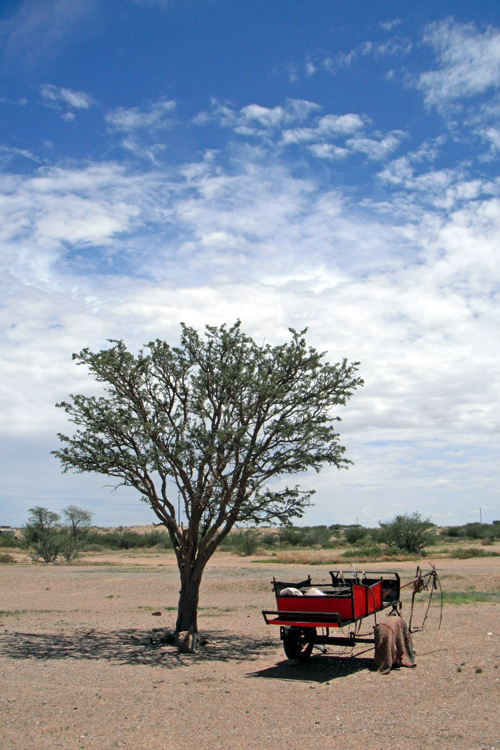 The capital of Karas

Keetmanshoop, Afrikaans for Keetman’s Hope, has an interesting history, beginning with Johan Keetman’s association with the Nama people, traditionally nomadic pastoralists who were the first people to settle in the area, naming the place ≠Nu-≠Goaes or Swartmodder  (black mud).

‘Keetman’s Hope’ was symbolic of a substantial sum of money that a German businessman, donated to Johan Georg Schröder, the first missionary appointed in the area by the Rhenish Mission Society.

This was in 1866. Schröder organised the construction of the original Keetmanshoop church that was washed away by floodwaters in 1890. Another church, built on higher ground, was completed several years later.

Schröder changed the name of the settlement to Keetmanshoop in honour of the benefactor Keetman, who reputedly never visited the town that bears his name.

In 1978 the stone church was declared a national monument and became the museum of the town. The high-roofed building still retains a few rows of wooden pews and an altar on its far side, not to mention the serene and peaceful energy of the old church.

Amongst a collection of traditional colonial household items and a display of rock specimens, petrified wood and fossilised eggshells, the museum reveals interesting information on the history of the Nama/German war of 1904–1907 and Nama traditions. A series of pass tokens – a system of control enforced by the German authorities – is also on display.

The town is the capital of the Karas Region and has ample supermarkets, banks and petrol stations. (Central Lodge on 5th Avenue is a good stop to have a bite and buy items made by Karas Huisen Crafts.)

It also has several buildings of historical interest, the first being the Tourist Information Centre situated next to Central Park, which is housed in the old (Imperial) post office Kaiserliches Postamt built in 1910.

Here, the assistants will inform you of Keetmanshoop sights, such as the museum, Eagle Monument and Schützenhaus, the oldest German club in Southern Africa. Established in 1899, it now functions as a guesthouse, while the finely crafted bronze karakul monument honours the long-established karakul sheep industry in the south.

The information centre has a list of operators for Tseiblaagte township tours that give participants a taste of contemporary Nama culture. Karas Huisen Crafts in Tseiblaagte’s Tseib Avenue, five minutes’ walk from the centre of town, is well worth a visit to support local craftsmen, who make attractive hand-embroidered handbags and endearing soft African toys, with the proceeds assisting people infected with or affected by the HIV/AIDS virus.

The area around Keetmans, as the town’s name is abbreviated by locals, is popular for its quiver-tree forests where you can view more examples of this iconic tree of the south than you’ve ever seen before. //Garas, the Nama name for the quiver tree, also referred to commonly as kokerboom, is the namesake of the Karas Region.

West and north of Keetmans

From Keetmans the B4 leads westwards toward the coastal town of Lüderitz and its promontories for a worthwhile detour to explore the desert. The land turns to sand as you near the coast and ‘brown hyaena’ caution signs begin to appear next to the road.

If continuing towards Mariental and the Hardap Region, keep an eye open for the springbok kaross sellers outside Duineveld near Kalkrand. Their hand-sewn wares draped over farm fences rival the shelves of expensive shops for unadorned Namibian character.

The Tropic of Capricorn sign is a recommended stop for taking a memorable photo. Once in Rehoboth, the museum offers insight into the history of the Baster people of the area. The next stretch of tarmac will take you into the rolling hills of Windhoek, green and lush in the rainy months, a tawny embrace of grass and earth in winter.

It is along this southern route from the Orange River to Windhoek that you may encounter not only southern charm and hospitality but also come across one of the best road signs on this leg of your journey. Attached to an old tree stump at the entrance to the White House are the words: ‘Lag saam met my, sommer net – omdat ons dit nodig het’, translated as ‘Laugh with me, just because we need it’.