Deprecated: wpcf7_add_shortcode is deprecated since Contact Form 7 version 4.6! Use wpcf7_add_form_tag instead. in /home/travelnewsnamibi/public_html/wp-content/plugins/contact-form-7/includes/functions.php on line 540
 Exploring the Namibian coast - Travel News Namibia

The Namibian coast – a narrow extension between two deserts, one of water, the Atlantic Ocean, and the other of sand and rock, the inhospitable Namib Desert – is probably one of Namibia’s most fascinating phenomena. 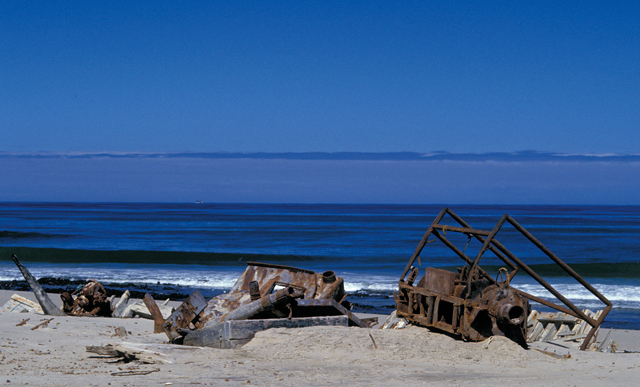 One afternoon, while still a child and with my mind full of dreams, I was looking out of the window of a train on its late afternoon run along the beach between Walvis Bay and Swakopmund. I marvelled at the pelicans and cormorants perched peacefully on the sand, the incessantly rolling waves and incredible sunsets, my inquisitive mind wondering what lay north of Swakopmund, and south of Walvis Bay.

Due to the ever-shifting sand covering the railway tracks, the old beach railway line has been moved beyond the dune belt and is now out of sight. Its only relic is the halfway stop Rand Rifles, named after the Witwatersrand Rifles, a South African regiment stationed just north of Walvis Bay during WWI. There is no doubt that were this old piece of railway line still operative, it would be a major tourist attraction!

What has remained is the fascination with the Namibian coastline, spanning 1 570 km between the mouth of the Kunene and Orange rivers. Nowadays the 30-km stretch between Swakopmund and Walvis Bay can be covered by car in about half an hour, driving past Vierkantklip, the old railway bridge, the Langstrand Development and the guano island on the sea side, and on the land side, the huge dunes where outdoor activities such as quad-biking, paragliding and dune-boarding are practised. Careful driving is essential on this short stretch, as many drivers have lost their lives due to misty conditions, reckless driving, sand dunes shifting over the road and windy and hazy road conditions.

Beyond the two cosy coastal oases of Swakopmund and Walvis Bay, conditions change rapidly. Theoretically one can drive right up to the mouth of the Kunene River; practically this is a once-in-a-lifetime adventure, where meticulous preparation, a minimum of two 4×4 vehicles, proper guidance and knowledge of the coast are absolutely essential. Imagine putting these requisites together and leaving Swakopmund for the Kunene River mouth. Some 15 km north of Swakopmund you pass Wlotzkas Baken, a weekend shantytown without running water, every house having its own water reservoir on stilts (its inhabitants swear by the therapeutic value of this arrangement). Further north lies Henties Bay, mostly a holiday seaside town for pensioners situated at the mouth of the Omaruru River, whose water from subterranean aqueducts reaches the sea. Mile 72 is a fishing spot with camping facilities, then comes the Cape Cross Salt Pan, and Cape Cross itself with replicas of Portuguese naval beacons and the biggest seal colony on the Namibian coast, not to mention a magnificent lodge.

The salt road up here is good. We pass Mile 105 before reaching Ugabmond, where the Skeleton Coast Park starts. Here we need a permit to enter. It’s mostly fishermen who go angling at Torra Bay and Terrace Bay, and even up to Möwe Bay, all spaced many kilometres apart along the endless sandy coast with its ice-cold waters. At Möwe Bay the road ends and from here one needs special permission to drive a further 300 km northwards to the Kunene River mouth. Proper guidance is essential, as dune belts need to be crossed and beach driving, which is only possible during low tide, becomes necessary. Numerous Land Rovers have been lost in the past by drivers who thought they would make it but were caught between the dunes and the tide.

On the other side treacherous and muddy salt pans are lurking. Only the real experts know how and where to cross them to the interior. Huge mouths of rivers with unfamiliar names such as Hoanib, Hoarusib, Khumib and Sechumib have to be crossed. These rivers drain westwards through Kaokoland, but seldom reach the sea. The landscape here is at its harshest, with ice-cold sea-winds from the Atlantic and piping hot sunshine. Wind-polished rocks and the absence of fresh water have created a grandiose landscape where humans literally vanish from the earth’s surface. Seal colonies, shipwrecks, the loneliest grave on earth – that of Mathias Khoraseb, who drowned during the Dunedin Star disaster in 1942 – old aircraft wreckage, broken masts, wooden ship planks, flotsam and jetsam of centuries… and an endless repetition of sand, sand, and ever more sand. The mouth of the Kunene River itself is not spectacular, nothing more than a sandbank that penetrates into the river’s fresh water, with a freshwater turtle in it, and maybe a crocodile’s skull washed up on the beach. The 700-km trip back is endless; again sand, cormorants, wind, seals, heat, the odd jackal, salt pans, rocks and dunes.

A notable exception to the monotony is Rocky Point, a huge rock on the coast, which has time and time again served as a naval and aircraft beacon. Vehicles, equipment and our physical and psychological limits are pushed to the utmost limit. Once done and back in Swakopmund, it remains an unforgettable experience of a lifetime, albeit one which I have no urge to repeat ever again.

And to the south?

Several kilometres south of Walvis Bay lies Sandwich Harbour, an ecological paradise, a wetland with an intriguing history, which can be reached only by 4×4 vehicle. Virtually the only other access to the Atlantic Ocean to the south is at the southern harbour town of Lüderitz, a spectacular coastal village built on rock, where German colonialists first set foot. Lüderitz and Namibia’s histories of diamond mining are closely intertwined, also the reason why one is not allowed to enter any beach area south or north of Lüderitz, as this is all Sperrgebiet – closed to the public due to diamond mining. Again, because of its inhospitable nature, the area is only gradually being opened for tourism. Four-by-four dune-driving safaris between Lüderitz and Walvis Bay are slowly being developed, rewarding participants with indescribable natural scenery, interspersed with legendary shipwrecks such as the Eduard Bohlen and old diamond-digging fields with intriguing names like Grillenberger, Charlottental and Holsatia.

Trips along the coast south of Lüderitz are also gradually being developed. Here old deserted diamond-mining towns similar to Kolmanskop – Elisabethbucht, Grillenthal and Pomona – beckon, as well as the famous Bogenfels Arch, a gigantic 55-metre-high rock feature on the coast. Since few Namibians are privileged enough to enter these territories, a good option to see Namibia’s southern coastline is on a scenic flight or fly-in safari to one of the amazing Namib lodges.

Diehards may want to see Namibia’s southernmost coastal town, Oranjemund, where Namibia’s fortunes in diamonds are being unearthed. This village is basically a mining town, with very little tourism infrastructure. Nevertheless, one may pay a visit to Namibia’s southern border outpost – if it can be sufficiently motivated.

This article appeared in the Dec ‘04/ Jan ‘05 edition of Travel News Namibia.